On Thursday night, Villanova face Bucknell as a part of the Legends Classic. In only the third game of the season, Jay Wright was in mid-season form, style-wise as the Wildcats' eked out a victory over Wright's alma mater. 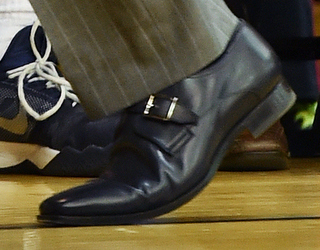 Coach Wright guided the sidelines on Thursday night in a light-gray pinstripe suit that last saw the court in the Big East Tournament when 'Nova lost to Seton Hall.

Continuing his 2-piece, 3-button pinstripe look of the season, Wright went with a broadcloth shirt of blue and white stripes and paired it with the same blue paisley tie that he wore when the Wildcats knocked off then Top 5 Louisville at the Wells Fargo Center 22 months ago.

He finished off the evening's look with a light blue pocket square.