Which means basketball season has arrived – thank the Seven Gods!

Unless you’re one of those weirdos that doesn’t own a television, or you’re my way-out-of-touch-with-pop-culture mother, there’s a very good chance you’re a big fan of the Game of Thrones series on HBO. For those out of the loop, Game of Thrones is the wildly popular television show based on a series of books that are in the process of being written by a Hobbit/Santa hybrid named George R. R. Martin. 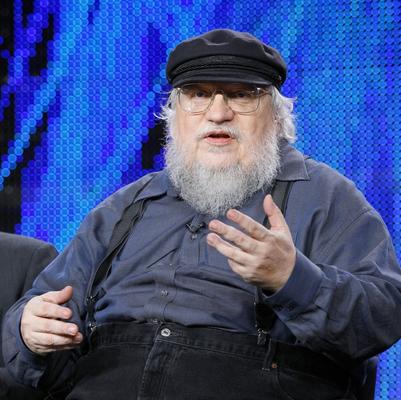 "Ho Ho Ho! I killed all your favorite characters before second breakfast!" YEAH WE GOT NERD JOKES

Much like the kingdom of Westeros in the series, college basketball and the Big East are full of great battles, broken and reforged alliances, and shifts of power. Was that enough of a stretch? Good. Basically, in this article I’m gonna compare Big East teams to different characters from Game of Thrones. Cool? Cool.

- Reading the books is for dweebs. We all know ol’ George is going to have four heart attacks before he even finishes the series, so there’s really no point. That said, if you ARE one of the losers who’ve read the books, DON’T SPOIL IT FOR ANYONE. This is written from the perspective of someone who has only seen the show.

- This article WILL contain spoilers for all current seasons of the show (Duh). If you’re not caught up, 1) WHAT IS WRONG WITH YOU and 2) Steal your parents’ HBO password and watch through Season 4 before reading this.

That’s pretty much it! We’ll go through the teams based on pre-season ranking. My only other suggestion is to get good and buzzed on a few goblets of Mike’s Hard Lemonade Cersei-style before reading, because this thing gets sloppy pretty quickly. 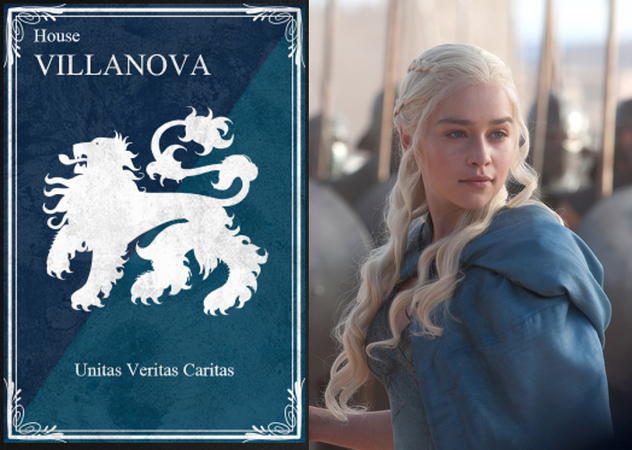 Villanova, much like Daenerys Targaryen, has clearly positioned themselves to be one of the most powerful forces in the Big East/Westeros. Much like the Khaleesi’s army of mercenaries and the Unsullied, Villanova sports its own veteran warriors, returning all but one of its starters from last year’s impressive season. Much like Daenerys and her army, Nova has the numbers, depth, and experience to be a potentially unstoppable force in the Big East this season.

The downside? Well first, much like the name ‘Targaryen’, being the overwhelming favorites headed into the season means that everyone is looking to take you down. Also, much like Khaleesi, Villanova has had pretty lame endings to the recent seasons. Not making the Sweet 16 since 2009 is pretty much the Game of Thrones equivalent of LOSING A DRAGON??? ARE YOU KIDDING ME DEANERYS??? MOTHER OF BULLSHIT, MORE LIKE. So yeah, Villanova’s been like that.

Villanova: The Dragon that’s ready to strike with incredible force, or maybe just peace out early 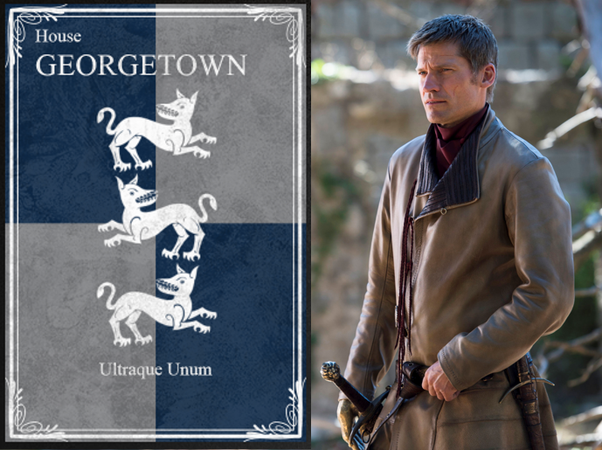 Oh Georgetown. Much like Jaime Lannister, they once had it all – power, prestige, and the respect of all in the land. They were the Golden Boy, and no one seemed positioned to ever threaten their authority.

Like Jaime did after getting his hand cut off, Georgetown spent most of last season piecing themselves back together after making a way-to-early exit from the Big Dance in 2013. They struggled more than they usually do and were somewhat out of their element, but still held a position of power within the realm.

Now, Georgetown and Jaime have both recovered and seem to be ready to strike once again. Georgetown has an impressive recruiting class coming in, the preseason Big East Player of the Year in D'Vauntes Smith-Rivera, and a chip on their shoulder to reestablish themselves as the Kingslayer of the Big East. Jaime, meanwhile, got himself a nifty golden prosthetic hand and started having sex with his sister again on top of their inbred son’s dead body! Hoya Saxa! 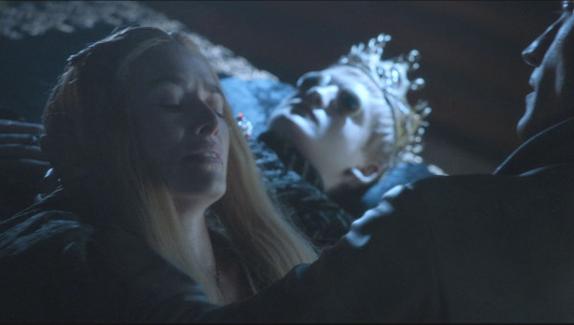 "Man, I hope no one posts pictures of incest and defiling of corpses on our site today." – Editors of VUHoops

PS – If Georgetown is Jaime Lannister, Syracuse is definitely Cersei. Those two have this weird love-hate/extremely unhealthy relationship going on. Plus, Syracuse and Cersei have about the same moral compass. 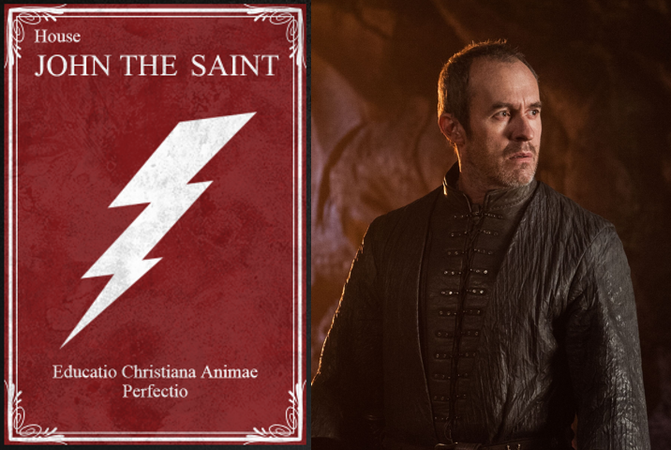 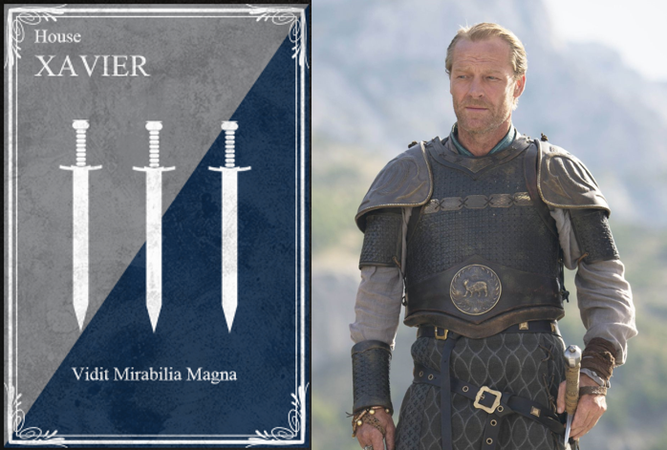 This is mostly on me, because I only started paying close attention to Xavier last season, but I’m really struggling to find anything interesting to say about them. It’s like, yes, they are a strong team who will perform well in the Big East and have a good chance to make the NCAA tournament. But everything else about them – their players, their coach, their fans – just seem uninteresting. They win the games they’re supposed to, and they lose the games they’re supposed to. It’s just a bowl of bland oatmeal with promises of an above-average Big East performance and a shallow run in March.

Which is I guess why Xavier is Jorah Mormont. Look, we all know Jorah is an important and central character to Game of Thrones, but there’s only so much of a 50-year old dude secretly in love with his teenaged queen you can take. Every scene with him is straight up snore city. Like do something exciting FOR ONCE IN THE WHOLE SERIES DUDE. 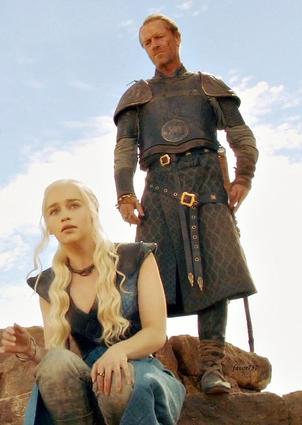 No thanks, I’ll just stand here and quietly leer at a chick half my age. 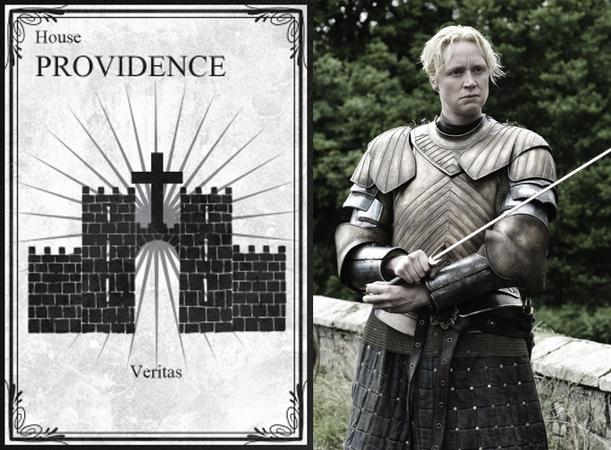 When you initially watch the Game of Thrones series, you’re swayed to think, "Wow. That Brienne of Tarth certainly is a mighty warrior. It’s completely unfair how she receives less respect than she deserves in the Game of Thrones universe." But then you think about it a little more, and you come to realize, "Wait, nope. She is given the EXACT amount of respect she deserves."

And that’s Providence in a nutshell; their preseason mantra is basically "Don’t sleep on Providence, they will definitely surprise you if you do." As a result, the season predictably unfolds with teams that don’t take Providence seriously getting upset, and teams that face the Friars knowing their danger typically are able to power through with a win. That’s basically Brianne – the fighters who have taken her on thinking, "This is just a woman, no biggie" get their asses kicked, while those who know her true power make sure they capture her with enough men to kill a dragon, and then make her fight a grizzly bear, for good measure. 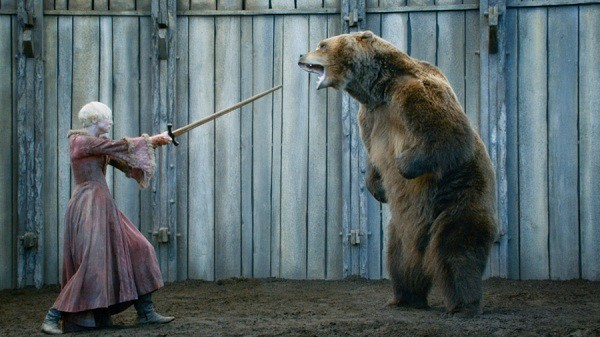 Little did we know it’s ALSO a female bear, who has struggled for years to establish herself as a premier fighter among the male bears

Long story short – battling your way through the Big East tournament and emerging Champions, just to turn around and lose in the first round of the NCAA Tournament is basically like winning an epic bloody fight with The Hound, but losing Arya Stark as soon as it’s over. The respect we give Providence is adequate. 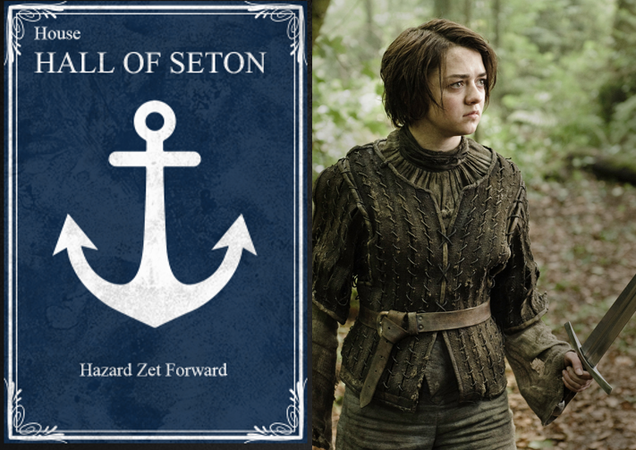 In recent seasons, much like Aria Stark, Seton Hall has not been a serious threat. Consistently slumming it through the bottom half of the Big East is the Game of Thrones equivalent of watching your father’s head get cut off, having to cut your hair and pretend to be the opposite gender, and then being kidnapped and held by a man who you swore to kill.

But Seton Hall, just like Aria, should not be underestimated. They’ve been slowly getting better over time, and have been known to strike out and take down much stronger opponents (as Nova fans know all too well).

The Big East Tourney buzzer beater, and what it felt like to Wildcat fans.

Add to that an incredible class of rookies entering the court, both Seton Hall and Arya are young, full of potential, and likely to be a powerful threat in the near future. 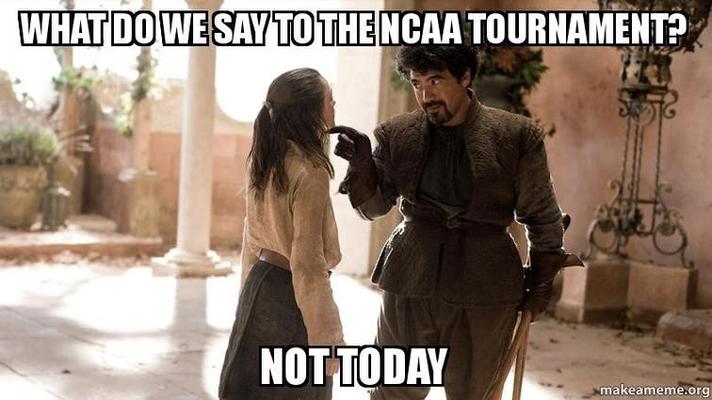 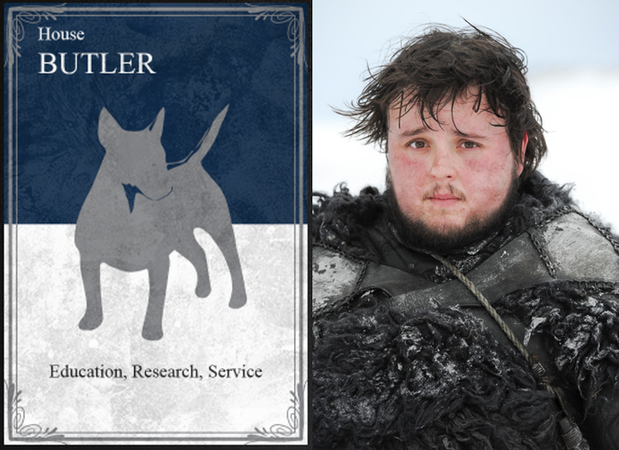 You can’t argue with Sam’s record – killing a Whitewalker and fighting/surviving the many battles with the Night’s Watch is no simple feat; there are plenty of his peers who would’ve died given the same circumstances. Similarly, making the NCAA Tournament Championship Game two years in a row is a similarly incredible accomplishment. Sam and the Butler Bulldogs have both recently survived incredible odds and come out on top, which is both lovable and admirable.

Here’s the thing – as you watch Sam and watch Butler, you WANT to believe they have great talent and potential…but the more you DO watch, the more you think maybe they’ve just gotten lucky one to many times and they’re in for a world of hurt in the near future.

The Direwolf isn’t going to be there to save you every time, Sam

Then again, Butler just knocked off #5 UNC, so who the hell knows. 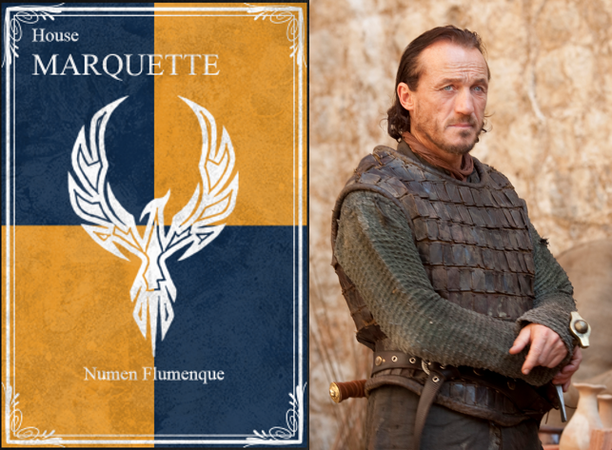 Bronn and Marquette follow a lot of the same parallels – for quite a few seasons, they have been tough fighters with a decent amount of recent success associated with their efforts. Marquette made the Sweet Sixteen in 2011 and 2012, and the Elite Eight in 2013; Bronn, likewise, successfully defended Tyrion Lannister’s life at the Eyrie, was knighted for efforts at the Battle of Blackwater, and had sex with at least 14 prostitutes.

However, with Buzz Williams for whatever reason deciding to transfer to Virginia Tech, and with Tyrion Lannister fleeing King’s Landing in the middle of the night, suddenly both Marquette and Bronn are without their longtime leader, leaving them at somewhat of a crossroads. Will they struggle? Will they thrive? Will they have sex with more prostitutes? Will they regret their choices? 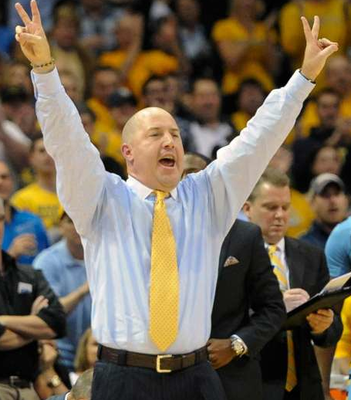 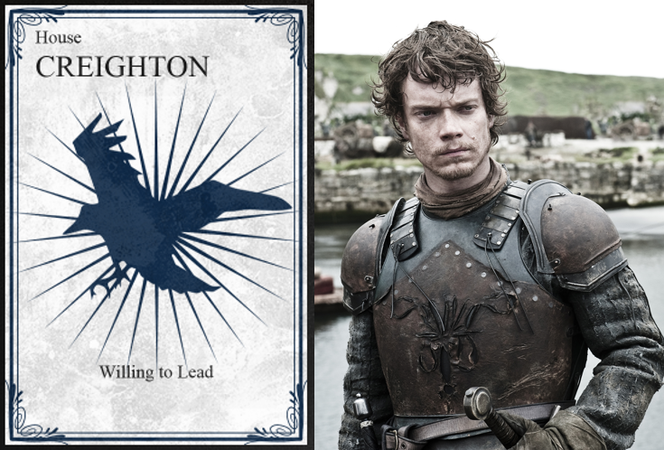 Creighton had a wonderful season last year. They thrived in their newly adopted conference, sported a somewhat cocky and boisterous fanbase, and shoved their Player of the Year, Doug McDermott, in everyone’s face. Reminds you a lot of early Theon Greyjoy, doesn’t it? He similarly thrived with his adopted family, the Starks, was a cocky and boisterous guy, and loved shoving his Doug McDermott wherever the ladies let him. 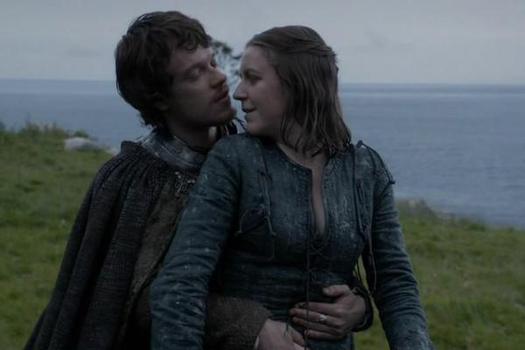 Getting your sister involved too? Player of the year, indeed.

However, we all know that as soon as Theon lost his "favorite toy" due to an unfortunate encounter with Ramsay Snow, he was a completely different person. I know what you’re thinking right about now – is he really using Theon Greyjoy’s castration as a metaphor for Creighton losing Dougie McBuckets? You bet I am. Without McDermott (and the rest of their graduating seniors), it seems pretty clear that Creighton will be somewhat of a wreck this upcoming year.

PS – I wrote this before Creighton upset Oklahoma, but I still stand by my in depth penis-metaphor-based analysis. Creighton will not be nearly the same team they were last year. 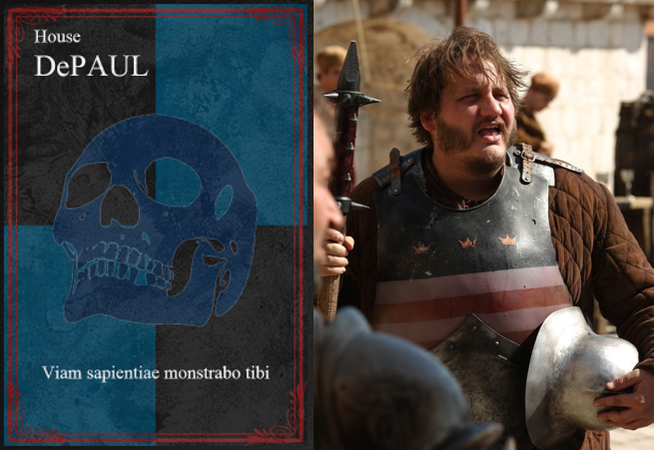 Do I even have to explain why this is DePaul? I’d be surprised if THEY don’t show up to the arena drunk, too, judging by the way they’ve played some games. If SBNation existed in Westeros, they’d probably have a thread called "Did Dontos Hollard F**k Something Up?" Answer: Yes.