The Sun's Arizin: Villanova Wildcats news and links for November 27, 2014

Share All sharing options for: The Sun's Arizin: Villanova Wildcats news and links for November 27, 2014

Happy Thanksgiving from the staff here at VU Hoops to our loyal and casual readers. We are thankful for you! 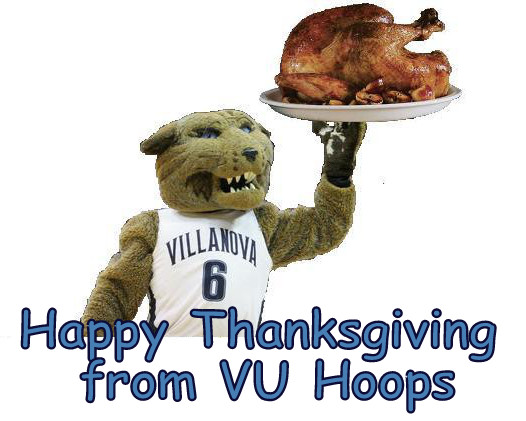 Let's start our link roundup with this poor Furman player who missed a dunk and two layups on one possession against Duke...

Butler Bulldogs continue to show their resilience | ESPN
The Butler Bulldogs stunned the North Carolina Tar Heels at the Battle 4 Atlantis in the Bahamas and showed they still know how to overcome long odds.

Villanova right now undeniably looks better than last year's 2 seed squad - CBSSports.com
"Villanova fans, I come to praise your team and to praise in sweeping ways," Norlander writes. "[T]his year's team? It's a compound of another seven seasons of experience for major-minutes guys last year who are back; a few players who've fine-tuned their bodies; a defense that's upped; and a roster that's ready to become a top-10 team in the country. I'm convinced of this now. Firmly."

Wyoming's Jason McManamen threw down the dunk of the season and the reactions are priceless | SBNation.com
Much dunk. Many reactions.

Until we change our entitlement to appreciation ratio | VCU Ram Nation
Sometimes I look around and fear that some of us have forgotten what it is like to not be favored to win every game. As fans we get to reading our own hype, and get a sense of entitlement about us. I know Shaka talks about this with his players, and has often pointed to this as a reason we have struggled.

SMU is Already on the Wrong Side of the Bubble " Rush The Court
It’s still really early but if you asked smart college basketball folks, do you think any of them would be confident saying anyone other than Connecticut will make the NCAA Tournament? Also, the bottom of the conference is no longer just bad, it’s awful. Games against East Carolina and Tulane may actually hurt the Mustangs’ RPI and SMU may need to dominate the conference to make any sort of at-large impression.

Jamie Hyneman talks Villanova, his live stage show, and the future of ‘Mythbusters’

For anyone who has seen an episode of the Discovery Channel's "Mythbusters," the idea of a live stage show from cohosts Adam Savage and Jamie Hyneman might be a little, well, unsettling. After all, as proven in episode after episode, our boys sure do love their explosions.

Letter: Commissioner wants to see formal documentation of Spingler's Radnor residency - Based on feedback I have received, I feel it necessary to address a recent article in Main Line Suburban Life.

All of a sudden, the lead's changed six times in the final three minutes, and the final buzzer sounds, and Villanova-Michigan is the most thrilling game of the young season — and perhaps the best prism to fully see both teams for what they are.

Villanova wins Legends Classic, moves to No. 9 in Top 25 (and one) - CBSSports.com

Jay Wright's Wildcats are 5-0 with victories over VCU and Michigan.

During the discussion, Booker and Fisher, whose ward includes Villanova, tried to several times to amend the 17 conditions added to the order allowing the development, but were voted down by the other four board members, James Higgins, William Spingler, John Nagle and Don Curley. Requiring the university to pay for additional sequential traffic lights and a right-turn lane from Lancaster Avenue onto Ithan Avenue were two of Fisher’s requests.

Cheating-Ass Wiener Dog Will Not Be Stopped | Deadspin

The main takeaway here is that all dog competitions should be interbreed. Otherwise, how else are we going to see a Chihuahua get trucked?

"Was anyone else bothered with us moving back (the tip-off) 10 minutes to accommodate ESPN?" Beilein said. "I mean, I love ESPN, guys, I love it, but when they told me that the game was being moved back 15 minutes -- something is wrong. We have a whole bunch of guys with 8 and 9 o'clock classes tomorrow morning and we move that game to 10:15 so that a football game could be finished."

Villanova, the Big East’s only ranked team entering this season, has little star power but plenty of balance.

They were convincing against VCU, destroying the Rams in the second half to grab a big 77-53 win at the Barclays Center.

Hildebrandt ready to step up for New Hope-Solebury | The Intelligencer

Potential Wildcat alert: "My dad went to grad school in Villanova so I’d really like to go there and I’d love to play a sport," he said. "I’d love that sport to be football but I need to get some size on me so probably baseball is a better fit."

More coverage of Villanova football alums, Corey Reeder and Ransford Quarrie, who alleged that the head coach at Pace University was physically and verbally abusive to players.

Rick Pitino Tried His Best Not To Embarrass Savannah State

"I tried everything," Pitino said of attempting to avoid running up the score in Louisville's 87-26 win over Savannah State. "We played four white guys and an Egyptian."