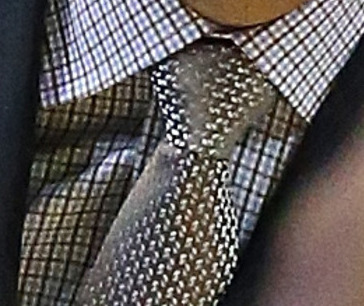 Besides putting out hard-nosed and dedicated basketball teams on the court, Villanova coach Jay Wright is obviously known for his stylish dress. Just as the 2014 Wildcats are exceeding most analysts' projections on the basketball court, so is Coach Wright's sartorial display on the sidelines. This was apparent in The Windy City on Wednesday night as Wright's Wildcats handedly defeated the DePaul Blue Demons, 87-62.

Digging deeper beyond his 3-button dark gray pinstriped suit, Wright took his fashion to a new level. The solid or striped dress shirt was gone. In a bold move at AllState Arena Wright sported a tattersall shirt. On a white base, maroon and light blue were interwoven to form the micro-check pattern.

To polish the outfit, one would have thought that a striped or bold patterned tie would be the obvious choice by the coach. However, the iconclast, matched the shirt with a geometric micro-design.

He finished the ensemble with a beige pocket square.

What do you think about this new Coach Wright trend?