I know it's been awhile, blame the snow

Share All sharing options for: Film Room: No. 6 Villanova vs. DePaul Grades & Analysis

So I've finally dug myself out of the snow long enough to bring the Film Room back from it's snowy apocalyptic demise. Sorry for the Wait like Young Weezy, but we back in action (all bad grammar implied there).

The gamer can be found here and below is a radio spot with Eli Hershkovich of Blue Demon Weekly on Radio DePaul from Tuesday.

Positives: JVP was strong on the boards. He had a career high 9 defensive rebounds and recorded his second double-double of the season, his sixth of his career. He was efficient from the field only missing two shots. Though he was strong offensively - especially on the glass where he's led the Wildcats in rebounding in 9 of 24 games this season- it was his inability defensively and lapse of focus that brings his grade down.

Negatives: Let's take a look at some poor JVP D 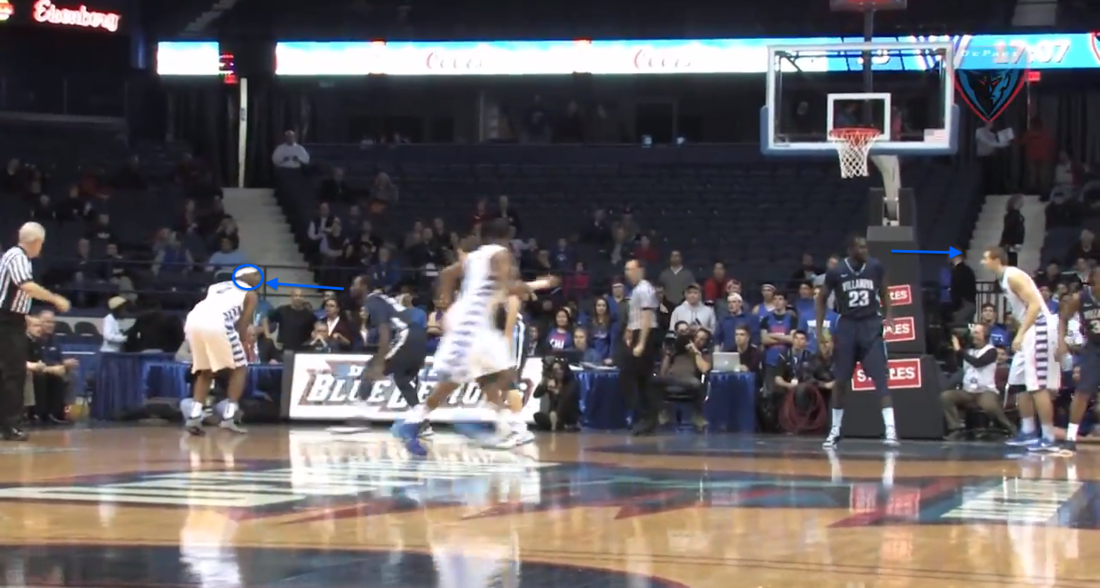 JVP is the only player guarding this side of the wing because Arcidiacono will be dragged away from the ball by a streaking DePaul player. JVP leaves a few feet between he and his defender when he should have collapsed on the ball since he's the only player on the side. If he gets beat, he has Ochefu to swing in rotation. There's no need to sag off the ball. Because he didn't collapse on the ball, this happened.

He's caught looking up at Tommy Hamilton IV, a known jump shooting forward, someone you have to crowd. Though JVP was Villanova's best frontcourt player against DePaul, they racked up 9 total fouls and didn't defend slashing forwards or Hamilton well.

Positives: Ochefu's performance was quite hard to grade. I think it's becoming under appreciated that Chef records 1.5 assists per game as a center, that's a huge part of his game and great quality that many bigs don't have. Defensively he was sound recording three blocks in just 17 minutes. And there's also this...

Negatives: In 17 minutes Ochefu found a way to foul out. This is becoming a huge issue with his game, but there's almost nothing he can do about it. As the only big on the floor, he has to sometimes absorb contact in the lane, and when you play any good team that has a player that can slash, in this case DePaul's Brandon Young and Billy Garrett Jr., he's going to get fouled just trying to defend the play. But he also only shot 33% from FG this game and wasn't as aggressive going to the rim, only drew one shooting foul. Of course, a player can't be as aggressive when they are afraid of fouling out.

Positives: Bell had a pretty flawless game against DePaul, stuffing the stat sheet basically everywhere. He was named to the Midseason Naismith List yesterday and it's a well deserved accomplishment as Bell has broken out as one of the best scoring two-guards in the Big East this season.

Defensively, Bell's been doing things like this all season...

Yes he blocked that.

Positives: One of the best games you'll see Hilliard play this season offensively. He hit a career high in three pointers made against DePaul and was active in passing lanes with two cookies. The most impressive about this game for Hilliard was how efficient he was offensively. 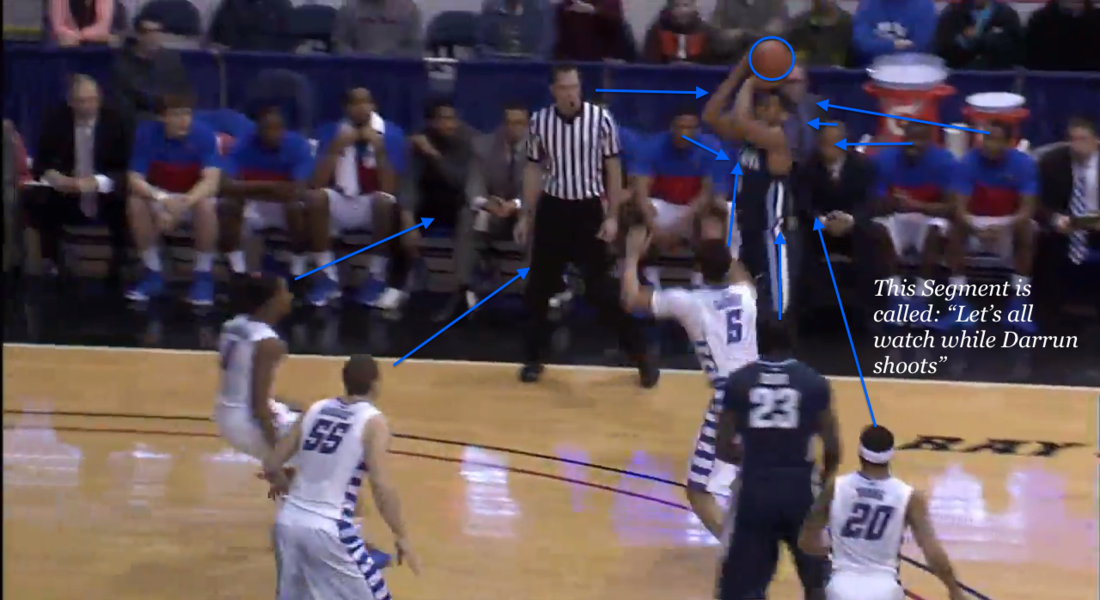 Hilliard sometimes will shoot too much from deep on attempts that aren't quality shots, as pictured above where a DePaul defender is crowding him plus the hitch on his jumper can sometimes slow him down. But he only missed two shots in this contest, both from deep. Very impressed with his performance. And like the graphic above, when a good shooter gets hot, we all like to watch.

Negatives: Hilliard didn't rebound well this game. 1 rebound for a lanky wing player that averages four per game is a disappointment. His three turnovers added to the 16 total for the Wildcats, also not a positive for his great night. Villanova won't be able to win games against higher level opponents if their starters contribute 11 combined turnovers in any game.

Positives: His assists stick out as a major positive since he doesn't normally go over five assists in a game. Also Arch was a monster from behind the arc and was efficient (100%) doing so. That's not normal for him, so let's examine some things here: 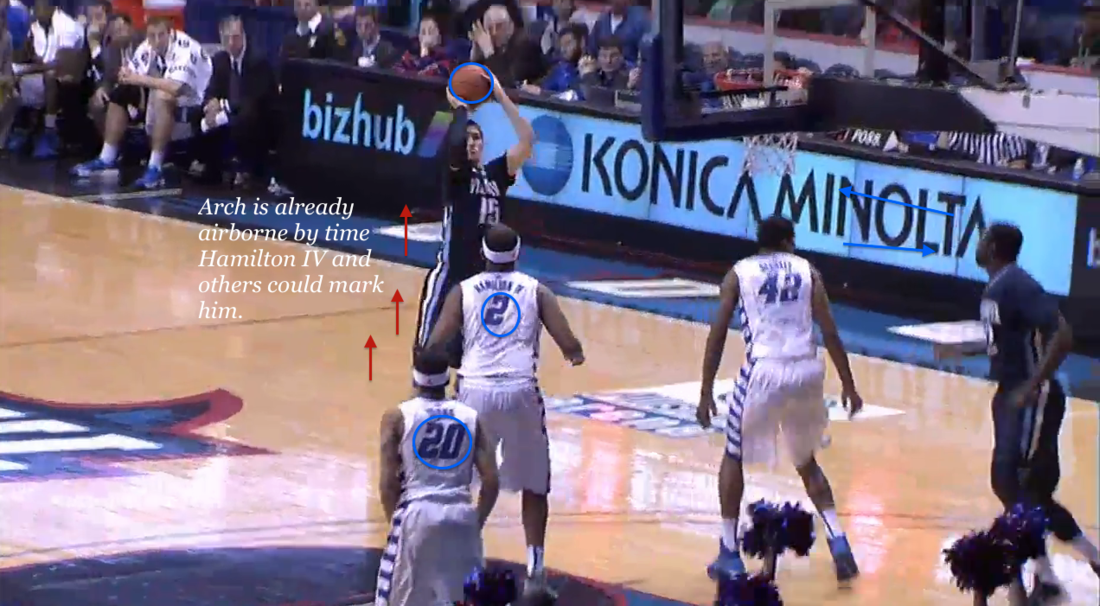 Where Arch was successful vs. DePaul was running in transition and pulling up while defenders were busy protecting the interior - one of the reasons the in-transistion three is so deadly and so risky. Hamilton IV and others were caught like deer in headlights, nothing they could do but hope he missed because they were so out of position. 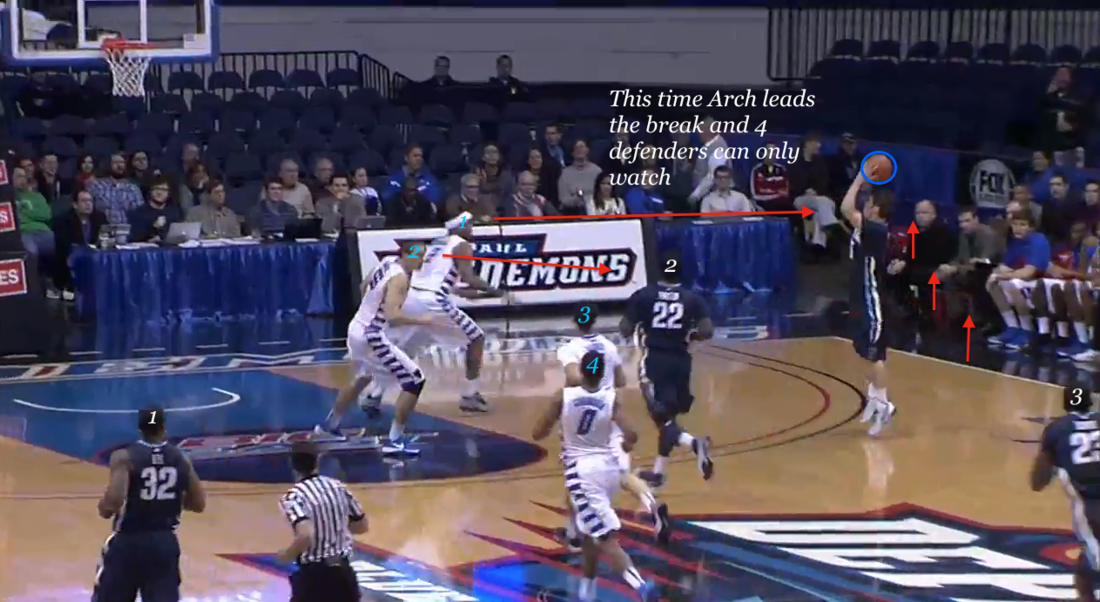 In a different scenario for the pull up three in transition, Arch led the break with up to three of his streaking players behind him. Not a smart idea. But in this case when you have this much space on the arc in between you and up to four players, it only takes a simple look around the court and a simple gather into a jumper. Not the smartest shot because it leaves multiple people out of position for a rebound and reverse fast break, but it's also a wide open attempt for a long-range threat. Pick your poison.

Negatives: Re-watching the tape from the DePaul game, I found Arch playing out of position a lot and not guarding his lanes in transition very well, a problem that has plagued Villanova all season, that being different forms of poor defense. 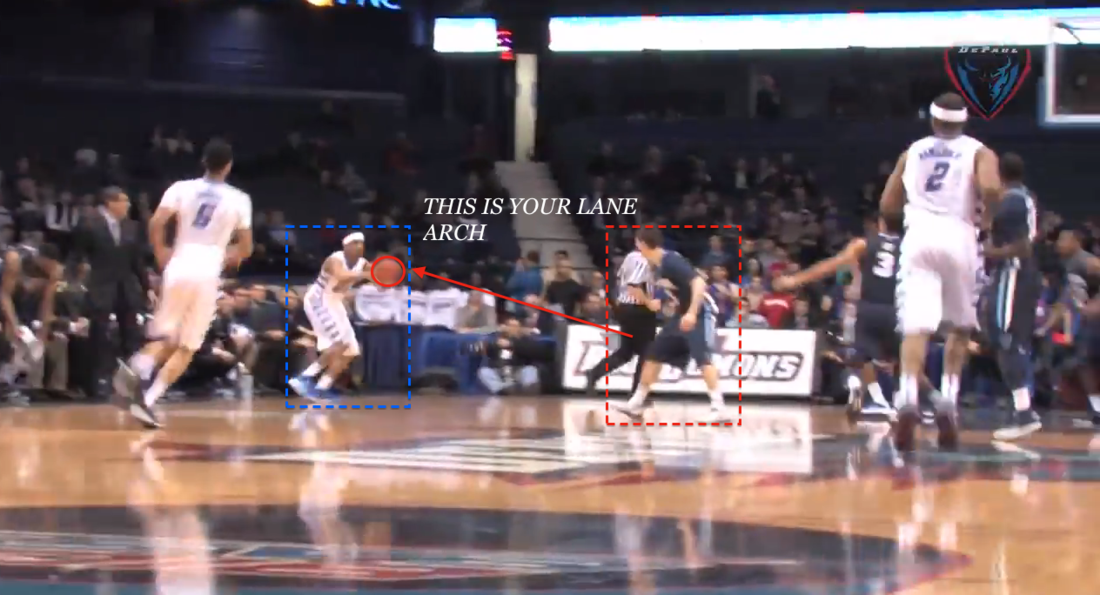 Arch is too far forward in this lane while defending the fast break. It's almost as if he was expecting another player to defend the wing with him but he allowed Young to get an open look at the basket by not getting back or reacting quickly enough. He was on an island and didn't fulfill his role. These are all things that will come back up in more important games.

His three turnovers during the game doesn't really help his case, especially against the six assists, just makes him look regular.

Positives: The only positive I can take from Hart's game is that he's attacking the rim confidently again, something that hasn't been seen in almost half a dozen games from what was once perceived as "The Big East Freshman of the Year." Hart has some work to do if he wants to get back into that conversation. His defense was solid too. Two steals in 18 minutes is great from your high energy guy.

Negatives: Almost everything else? Hart has been stinking up the joint in recent games and this is another one of them. Maybe it's time to stop holding the freshman in such a high regard because of how disappointing his play has been as of late. Missed every shot he took from the field and deep. Turned the ball over as much as he threw dimes. And got called for three fouls. Unimpressive.

Positives: He had 2 steals

Negatives: Everything else. 20 minutes and no points? Next.

Positives: Ennis made a shot

Positives: Jenkins completely filled his role in every way against DePaul. With a Villanova bench that has been absent for the last stretch of the season, Jenkins has stepped up to provide the spark of energy off the bench the Wildcats have needed. He only missed two shots and one from deep and added to the ball movement around the arc, found motion through screens and got open for high IQ shots. 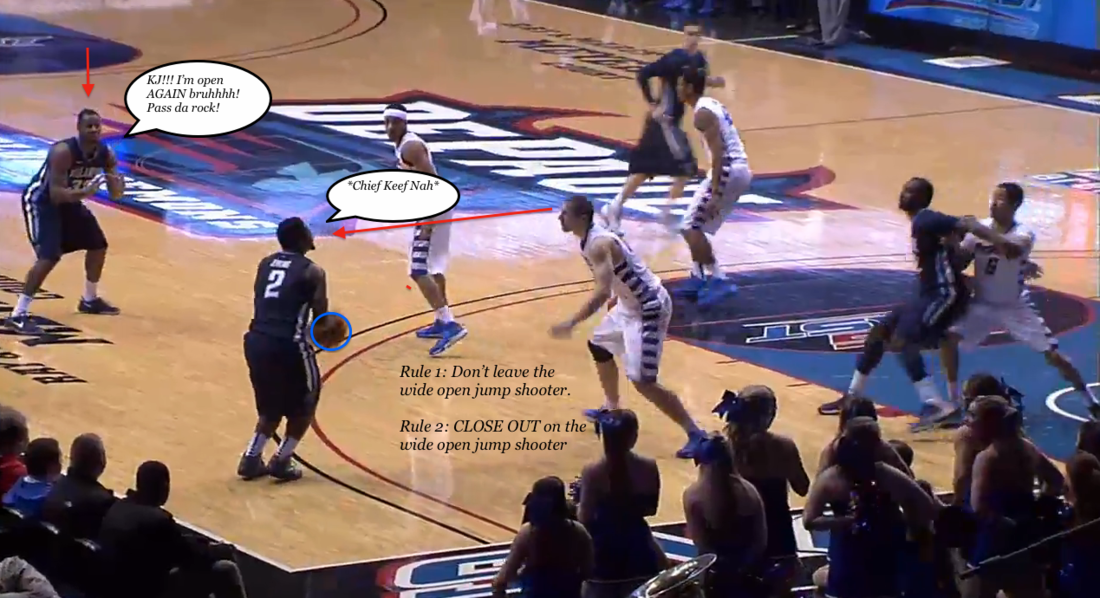 Jenkins already has his feet set before the DePaul defender could even try to close in on him. This is a done deal whether he passes the ball or takes the jumper. He did the latter of the two.