Film Room: Breaking down No. 9 Villanova's loss to No. 11 Creighton

Today's lesson: defending the pick and roll, mismatches and strong side vs. weak side perimeter defense

Share All sharing options for: Film Room: Breaking down No. 9 Villanova's loss to No. 11 Creighton

We all saw what happened. It was bad. People cried. Doug McDermott lived. Villanova's defense was absolutely horrible, even worse than Creighton's.

So for today's Film Room, I'll list the grades as I see them, but I'll be focusing more on the film itself instead of the overall grades. Just to put that out there ahead of time.

+ : Force in the post in 2nd half, solid scoring, free throw shooting, good ball movement, aggressive around the rim

- : Average rebounding totals, foul trouble, not aggressive in the first half, poor defense

+ : Played his role as well as he could in 18 minutes on the floor, scored well

- : turnovers were a problem, was the worse defender on the floor out of the starting 5, fouled out again, caught in almost every screen possible, played bad defending ISO situations

+ : From watching tape, seemed to be the most defensively sound of any starter, rebounded averagely, scored averagely

- : foul trouble, wasn't aggressive enough from the floor coming off a strong game, got caught in too many screens on the strong side of the court.

+ : Contributed to the ball movement of Villanova, wasn't in foul trouble this game, perfect at the line

- : didn't score well, inefficient from the field and three, not aggressive enough from the point position, didn't do much of anything in 31 minutes.

+ : didn't stink up the joint, played his role well in 16 minutes, didn't foul when in, scored well for his role

- : got embarrassed on one play by McDermott in the low post, missed more shots than he made

+ : a better game than what's previously been seen from Hart, solid rebounding in 17 minutes

- : missed all of his perimeter shots on bad looks, missed four of his six attempted shots

+ : For Ennis' role, he performed very well netting three deep shots and being the only source of energy from the bench.

- : Got abused defensively in the high post off the dribble, got caught in several screens, missed five shots of eight taken.

Before we begin, this is how good Douggy McDirkmott was in the first half against No. 9 Villanova

Scary yet slightly amazing right? Alright with that done, first let's examine how bad the Wildcats were at defending the pick-and-roll on the strong side of the court and reverse weak side

Defending the Pick and Roll 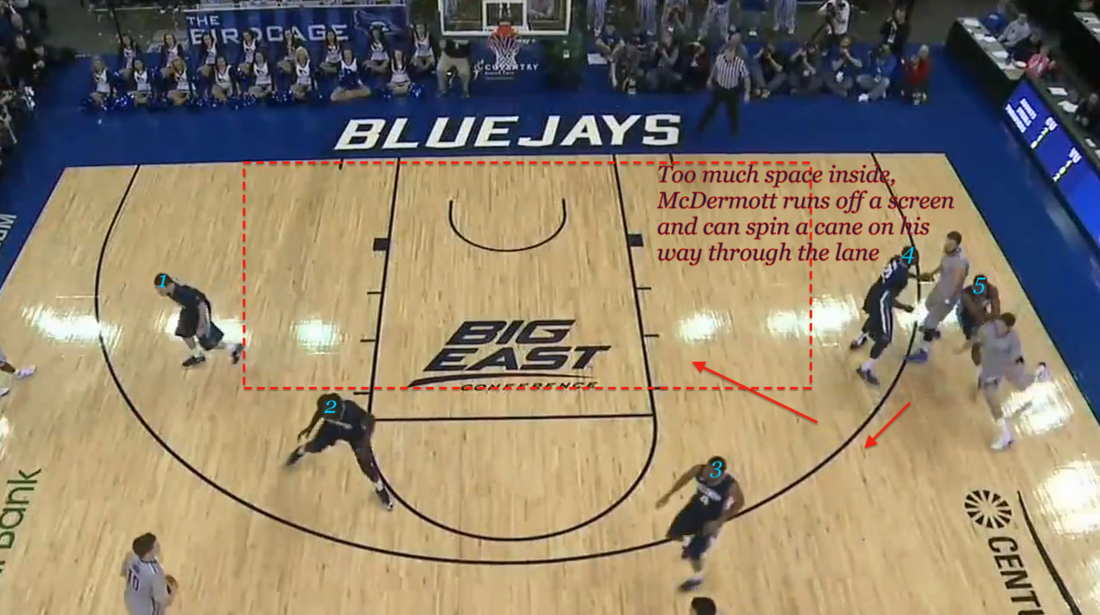 McDermott had a wide open lane to the basket by using a screen from Ethan Wragge on the strong side of the court to get Bell on his hip. After that, McDermott's quickness to the rim couldn't be stopped. A very good drawn up play by Coach McDermott due to how susceptible Villanova is to the pick-and-pop game.

It would seem that Creighton targeted Bell with these screens, or it could be the poor planning of Jay Wright to put Bell (6-6, 225) on McDermott (6-8, 230). It would have been better to put a lankier Hilliard on McDermott. The reasoning being that his wingspan (close to seven feet) would cut off McDermott's mobility and bother his shot more. Similar to how St. John's matched up with Creighton. 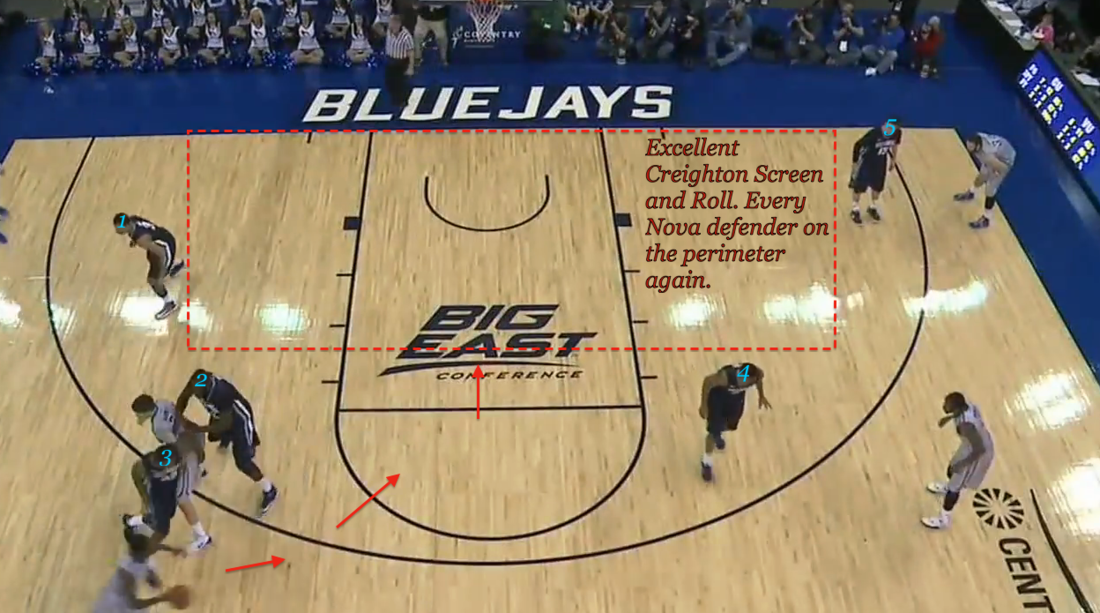 Five Nova defenders guarding the perimeter for possible opportunities to shoot and face-guarding their opponents instead of watching the well-documented quickness of Austin Chatman and Devin Brooks.

Same play but reversed to the weak side and caught Bell on his hip again and it's another clear walk into the lane. Too easy. Very well designed. 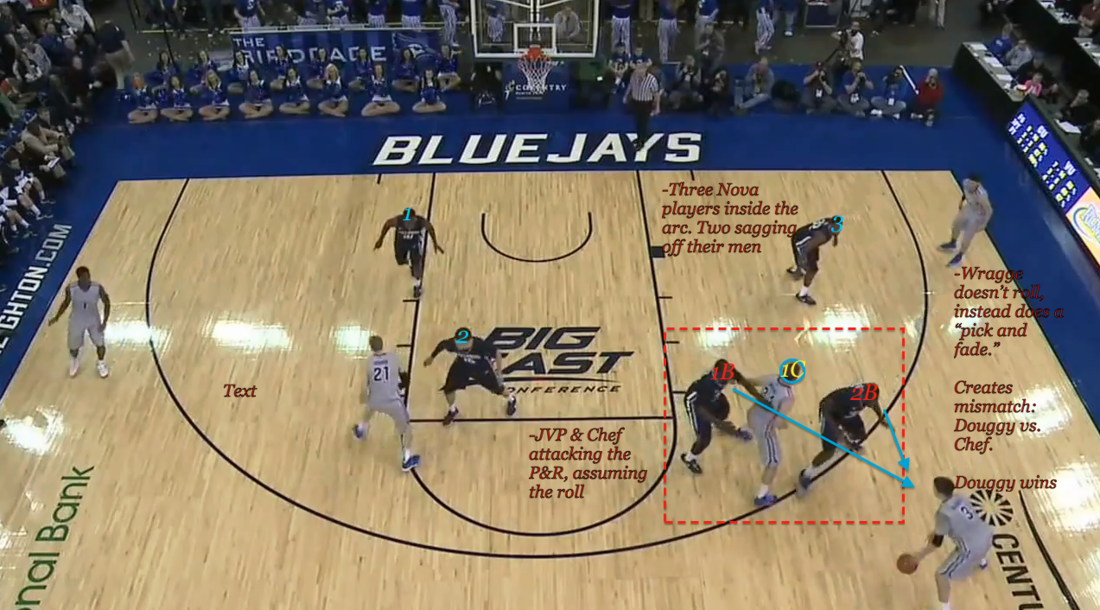 Wragge didn't roll to the basket but instead faded to the strong side of the arc, a higher IQ play for a high-volume shooting team, putting a good shooter in the corners. However, this was used to expose a mismatch, another thing Creighton did extremely well against Nova.

This play allowed JVP to follow Wragge into the corner and bring Chef 1v1 with McDermott. High IQ opportunity for Douggy and he sunk one from 25 feet or so. Properly planned. 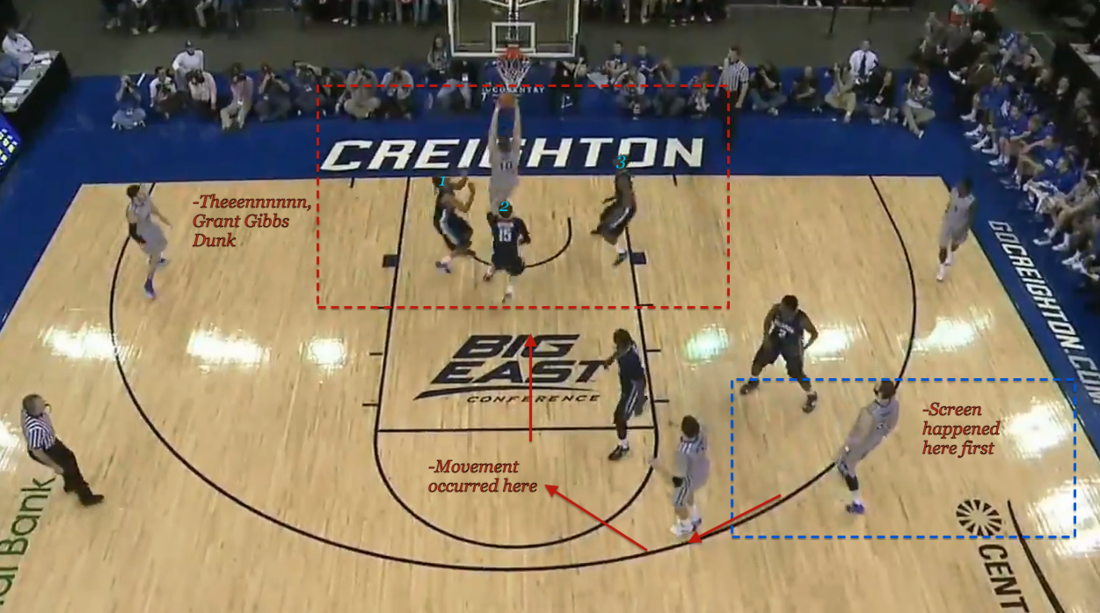 First off, Grant Gibbs should never dunk on your team. It's like Peyton Manning running in a touchdown. It stings in every way.

Either way, during this play, Gibbs used a designed screen on the strong side from Wragge (again) and he had Arch trailing him. Arch got caught in the screen and then had to move around McDermott to catch a very slow Gibbs. This caused Bell and Hilliard to leave their spots on the perimeter to stop Gibbs. Bad choice.

Even though this didn't happen, Gibbs could have kicked the ball out to either corner - specifically the weak side corner to who I'll assume was Avery Dingman - and had a better shot selection. But really nothing is more high percentage than a dunk. And that's what Gibbs got while three Nova defenders couldn't stop him.

It all started with the pick-and-roll on Sunday, a scheme that was used probably the best against Villanova all season.

If you know anything about Villanova basketball, you should know that the guards can't defend well in the high post or coming off terrific ball movement. That being said, their defensive rotations were tumultuous on Sunday night in Omaha. Creighton had some very quick guards which made using the dribble drive a very smart move.

Example 1 of poor reaction to the dribble drive: 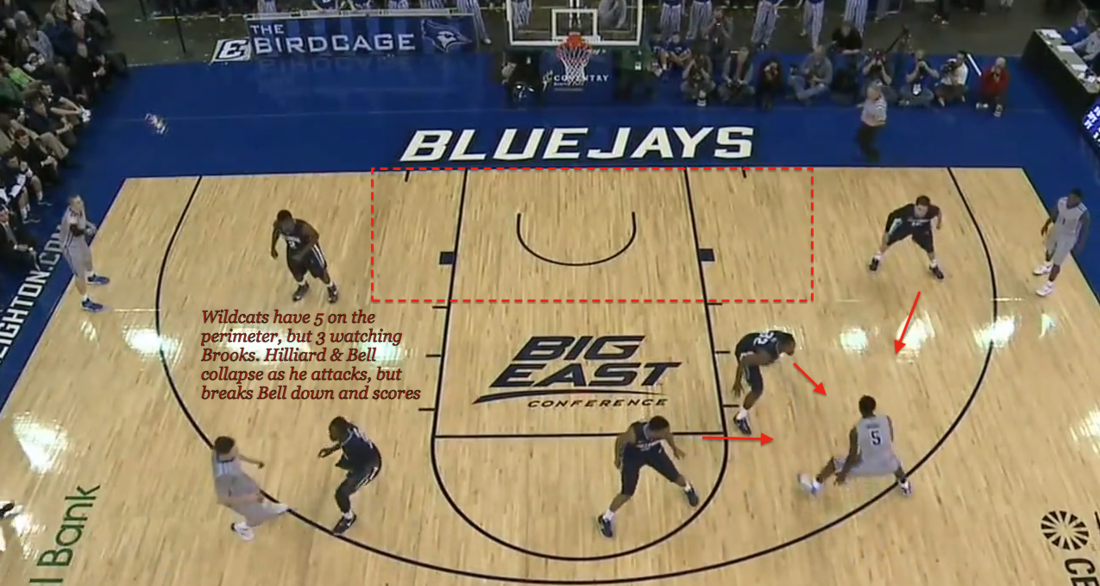 Three. Count em', three, defenders were staring Devin Brooks in his grill. This may be the best example of Bell's defense from Sunday. He face-guarded Brooks almost 17 feet from the basket and had a wide enough frame that he should have been able to stop him.

Instead Hilliard stepped forward for a split second allowing Brooks to use a double-cross move and take Bell to the rim and finish using his left hand. Good defense from Bell, better offense from Brooks.

Example 1 of a mismatch, example 5 of poor pick-and-roll defense: 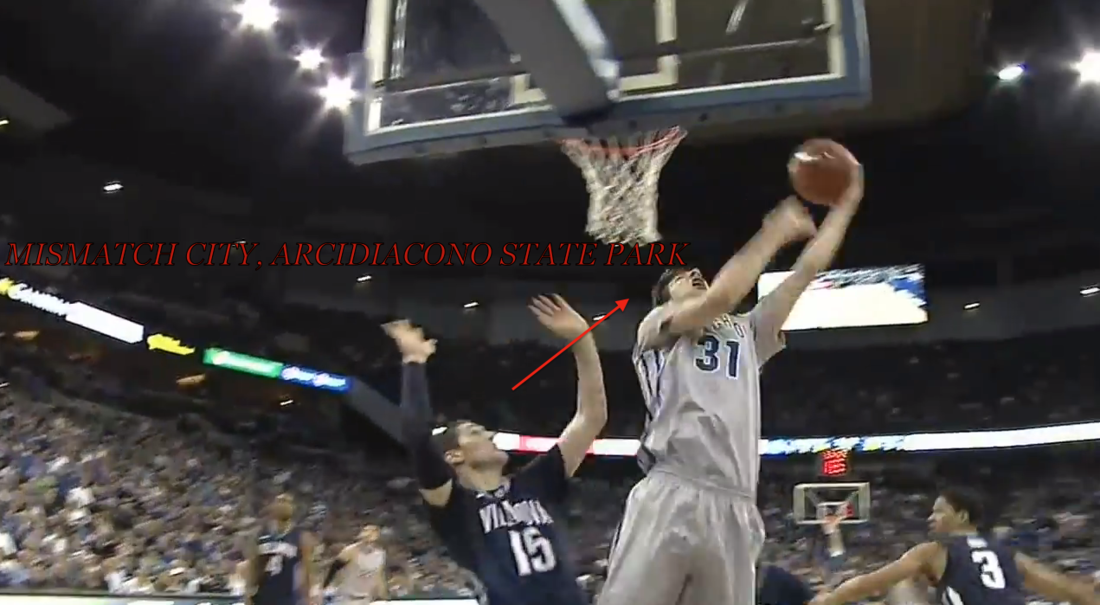 1) Arch is here because he got caught on a screen and was left guarding Will Artino. 2) Arch just put his hands up instead of focusing on sliding defensively. 3) All Artino had to do was switch hands and he had an easy lay-in.

Example 2 of poor reaction to the dribble drive: 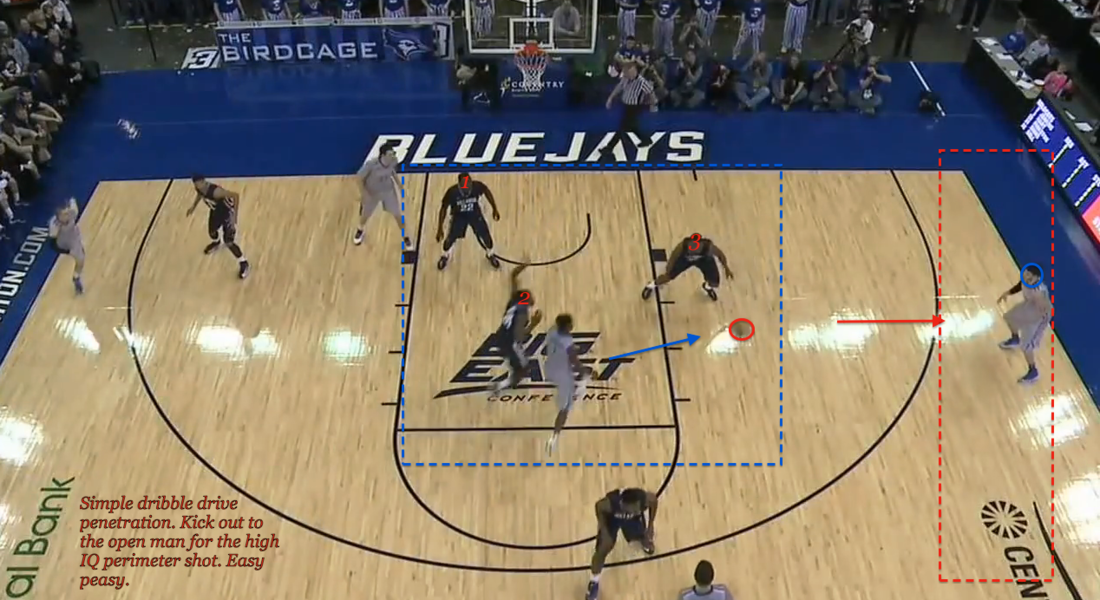 Bell is to blame for the breakdown of this play.

Chatman cuts into the lane being shadow-guarded by Ennis. Ennis was riding his hip and would have forced him into a difficult shot. Bell decided to step into the lane and provide help defense. The last thing you do when a player is riding someone's hip defensively is come from the strong side to provide help. Give up a two, not a three.

Example 3 of poor reaction to the dribble drive: 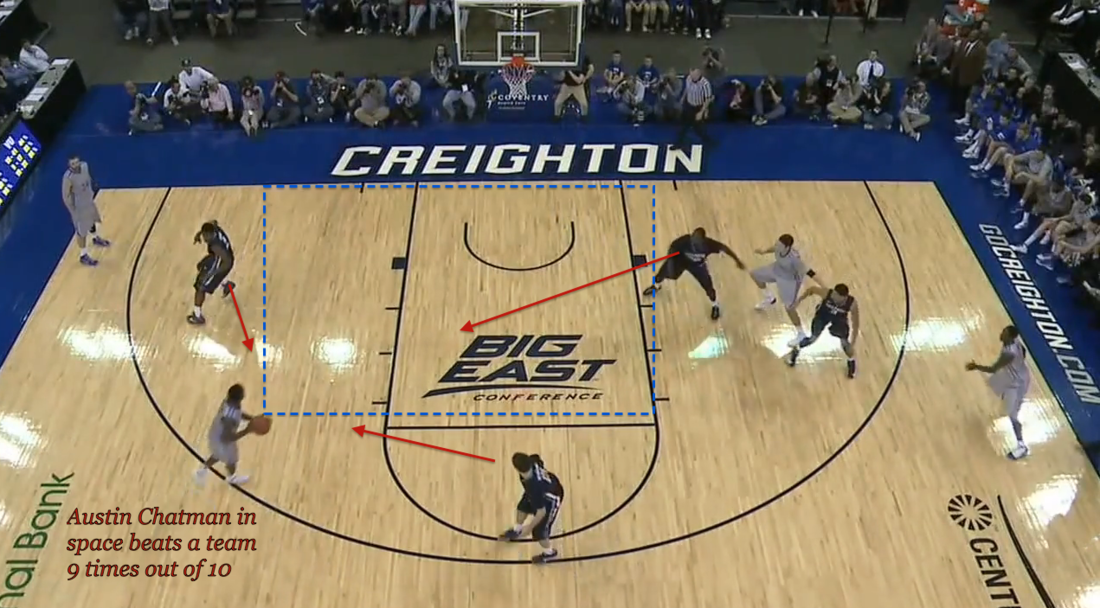 Two defenders are watching Chatman move into the lane after an excellent pass from a Creighton player out of screen. The last possible defender to stop him is JVP. Pinkston also reacted late just like Arch and Jenkins and finishes with his left hand after faking right.

Better offense, poor reaction by the defense. And to be clear, when JVP leaves his position, Chatman could have swung the ball to the strong side perimeter or dumped it off to what would have been a wide open McDermott, but again, another example of a better shot under the basket than twenty feet away from it.

Example 4 of poor reaction to the dribble drive:

Remember this play from the first game in January? 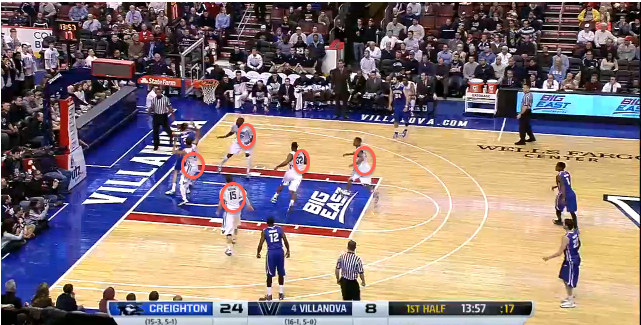 McDermott drew five defenders to the post area leaving Wragge for a three on the strong side of the wing. A horrible breakdown defensively. That can't happen again in that exact same way in the exact same spot hundreds of miles away right? 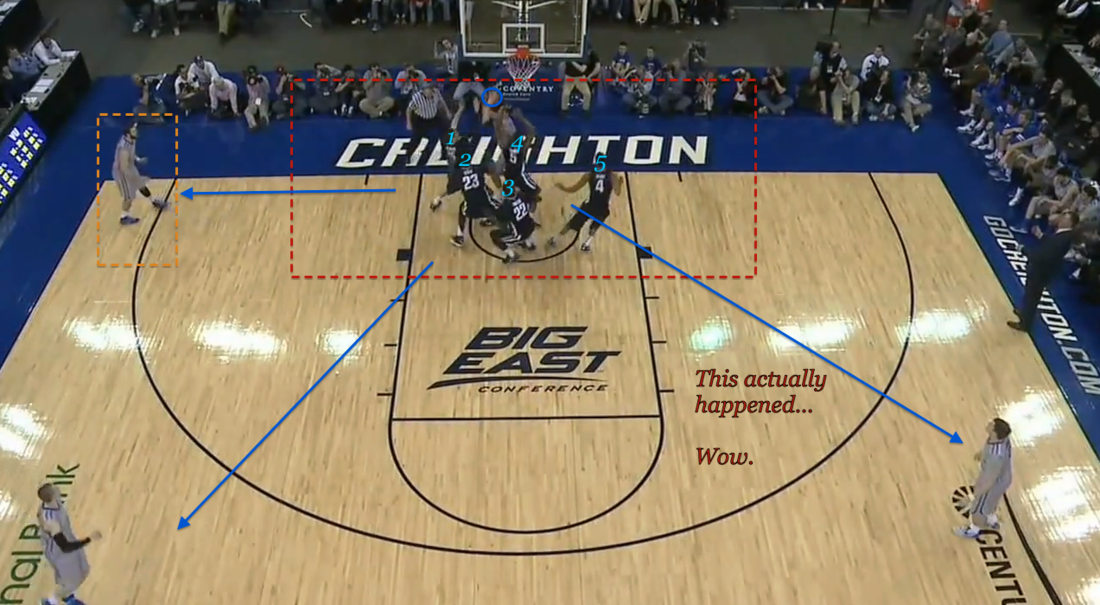 Every single Wildcat on the floor collapses to the ball as soon as McDermott touches it and puts two dribbles on the floor. He had four teammates (one out of screen) to pass to and they could have tested the wind with their opposite hand before putting up a shot.

Wragge eventually got the pass to the weak side and sank the bucket. But this is ridiculous that McDermott could have this much presence around the rim that every player jumps to his position. Horrendous defensive effort. Douggy must be wearing that new Axe.

Example 2 of a mismatch:

Now I know a lot of Villanova fans were complaining about the no-calls on what some screens Creighton used being called "moving." Well hopefully this is a consolation to some of the home court bias that McDermott may have been getting. I won't say every screen was moving though. 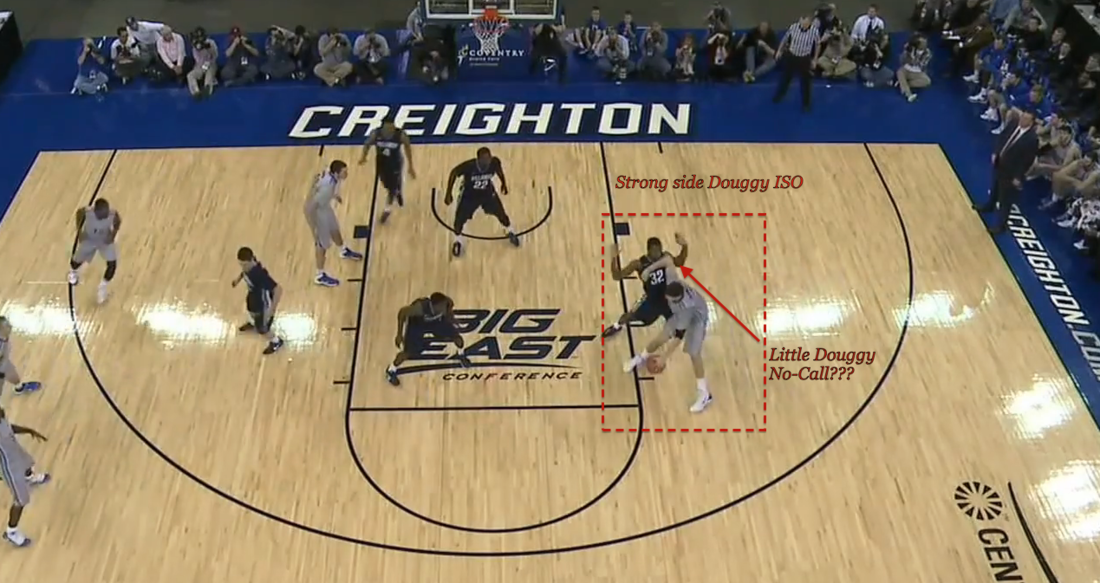 Bell took one under the chin. A hard one.

Of course that's hard to see for fans and to get a no call is bad in this situation. All that aside, this is still basketball, players have to play to the whistle and not expect everything to be called. Especially when away from home.

I still consider this a mismatch because Bell is too slow to stop McDermott and not lengthy enough to block his line of sight to the basket completely being two or three inches shorter than the preseason All-American. McDermott works bell to about 12-feet in and uses his turnaround Dirk-esque step back, one-legged jumper over top of Bell. Filthy move. Bell just wasn't good enough defensively to guard McDermott. Hilliard would have been a smarter choice, not saying the results would have been any better though. Hypothetical at best.

Leave your opinion or your grades in the comments below.