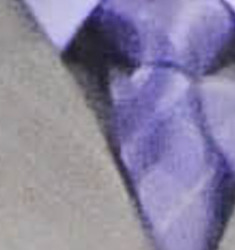 The last time Villanova took the court against Creighton, head coach Jay Wright sported a three-piece and the Wildcats lost. For Sunday's visit to Omaha, Wright switched up his appearance in an effort to notch a win against the Bluejays, but the coach's stylish dress was not enough to overcome Creighton's offensive onslaught as 'Nova lost 101-80.

Although the Wildcats lost, Wright commanded the sidelines in style in a light-grey sharkskin 3-button suit. He matched the suit with a pale pink solid shirt with a pink and purple modern-plaid tie.

He polished the ensemble off with a lavender pocket square.

I can't blame Coach Wright for pulling an already-worn outfit out of the closet again. Who can argue against a 2-0 suit? Unfortunately it wasn't enough against hot-shooting Creighton.