Film Room: Breaking Down No. 9 Villanova vs. Providence

Today's Lesson: how to handle overtime

Share All sharing options for: Film Room: Breaking Down No. 9 Villanova vs. Providence

Double overtime for the Wildcats against a tough Providence team on the road either shows a bunch of grit from a team learning how to win in rough situations or shows a team letting an unranked conference foe stick around past regulation with 15+ turnovers. Or, it's somewhere in the middle.

Fun Facts from the readers:

Now what I do not understand.

The gamer can be found here

+ : 8-12 from the field is a bonus, strong on the boards, and the first twenty point game JVP has had in a while. Wildcats will need stronger performances from him if they want to win any more trophies this season. 46 minutes on the court without looking too exhausted

- : 4-10 from the line? Questionable awareness at the end of the game on defense? All negatives, but not too many from JVP

+ : 11 points and 8 boards, 4 offensive, two steals, one block and only missed three shots from the field. Oh yeah, and this magnificent thing for 73 feet of awesomeness and any other applicable hyperbole.

- : Five turnovers. Missed opportunities at the line and very poor defending an undersized Batts for PC. Not the greatest performance when it comes to on-ball defense and being a key reason PC could stay in the contest. He contributed to nearly 36% of the Wildcats TO's.

+ : Impressive on the boards and in the passing lanes, another 40+ minutes workhorse.

- : turnovers were a problem, eight fouls for Bell in the last two games, missed six shots from deep and 11 total.

+ : Hilliard has been consistently average in two games but also consistently strong defensively. Two steals against PC, three assists, perfect from the line.

- : foul trouble again, missed seven shots, 8 attempts from three and three turnovers are bad, even for 43 minutes out of 50.

+ : Nearly a perfect game for Arch. Game winner and 21 points/6 assists/3 steals is one ofhis best nights this season.

- : Still shot the ball nearly too much, some were off offensive rebounds from shots that he missed and he stepped into another contested one. Wright's got to drill some more shooting fundamentals into him. That aside, he was very patient with the ball in his hands. Won't take that away from him.

*There was no bench tonight. If there was, they receive an F. Some may complain that Tony Chennault played good defense against Cotton in the first half and that's great, but Cotton was still the best player on either team last night* 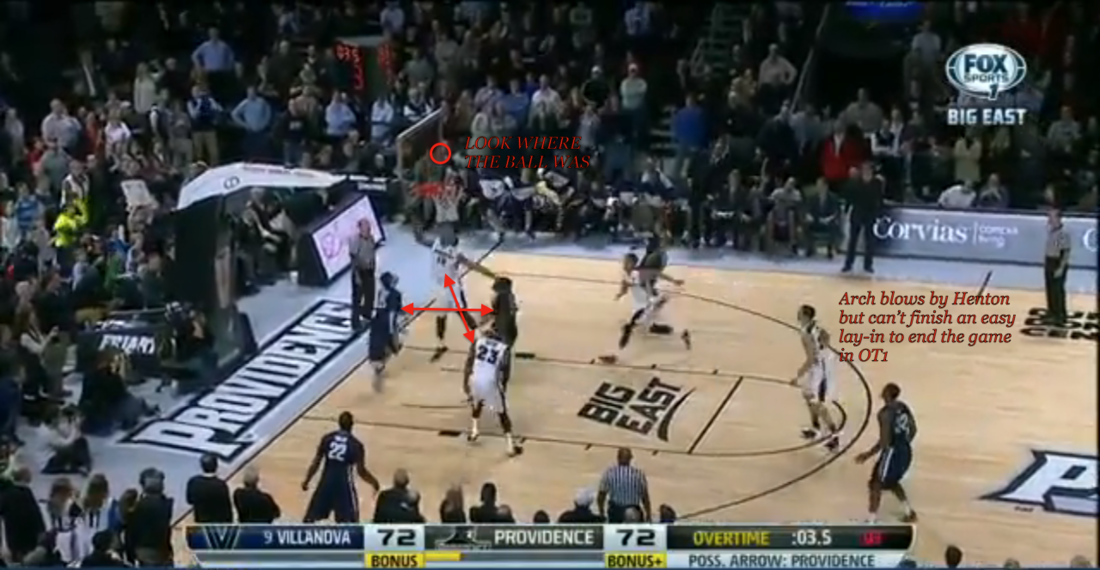 Arch had space. He broke his defender down off the dribble and got to the weak side of the court without running into any help defense. Yet somehow, Arch blows a lay-up high, way high, off the glass with no one around him. Interesting how that happened. Seemed to be a simple left hand lay-up. 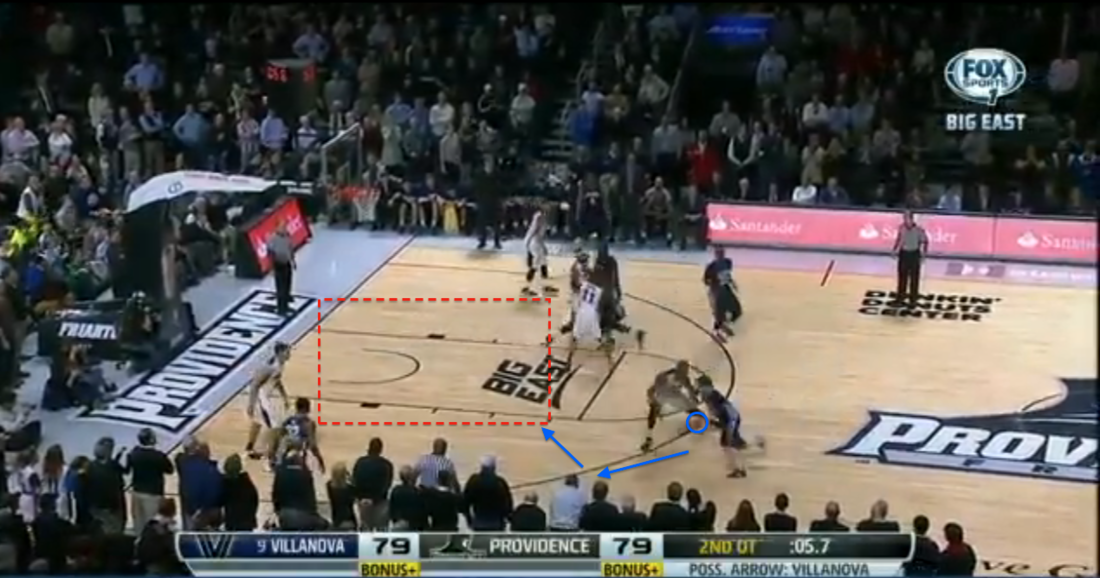 Different overtime period, same play on the weak side of the court with time ticking. Yet something went different. Instead of trying to attempt an off-hand layup off the glass over Batts, Arch leaned in for the contact just in case he missed again. Better execution and the Wildcats look like the winners for the moment.

Very good spacing by the Wildcats to give Arch a weak-side ISO. Even better that he took the last shot and not Bell. Only Arch could have got this play done from the left side of the arc.

First, there's this play before the end of regulation to make overtime. 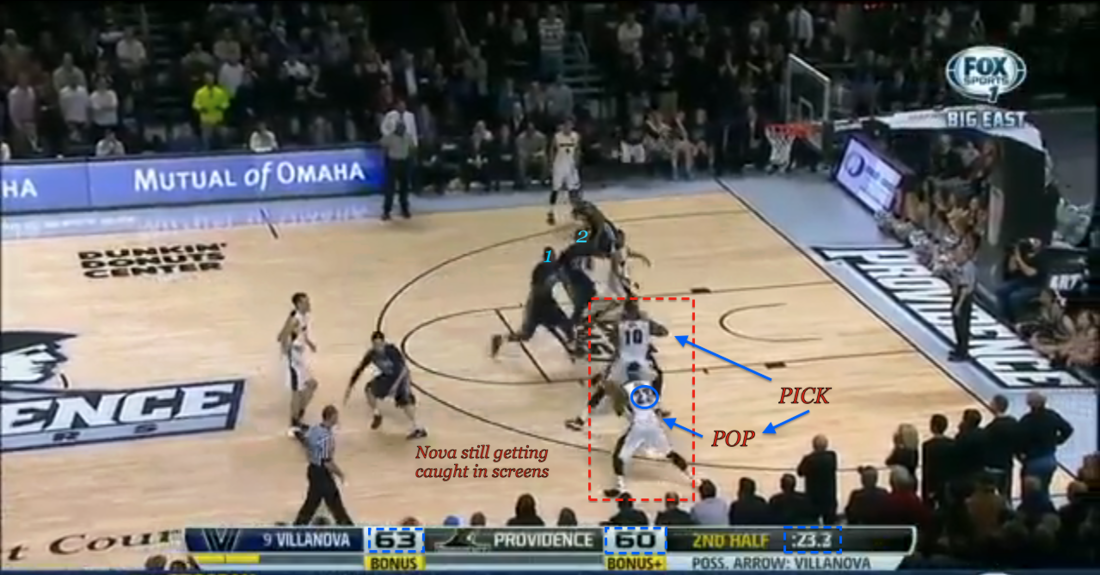 Villanova is still getting caught in screens defensively. On this play, Henton is the lone big man streaking down the court and hasn't made a shot until this possession. Great play by Ed Cooley to shield Henton on the strong side because the assumption was to watch for Cotton who'd been so deadly in the later chapters of the game.

Henton hits an easy one from twenty feet. Now to the breakdowns on defense in double overtime. 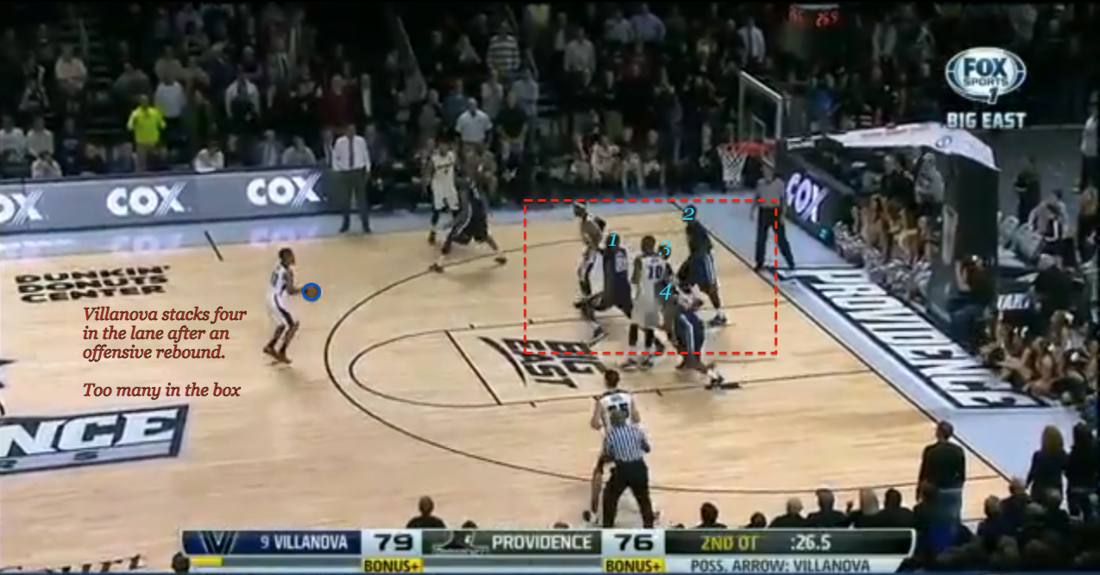 Not as bad as Doug McDermott and Creighton, but still pretty sloppy defensive awareness to mark the open man at the hottest spot on the court. Four Wildcats swarm to Batts as he grabs the offensive board. He used his pivot and found the open man, luckily it was their best player at the time: Cotton.

Henton was probably close to the last choice to shoot this ball in this situation, making him an even deadlier target. Shot, made, overtime.

Example 2, the last play of the game: 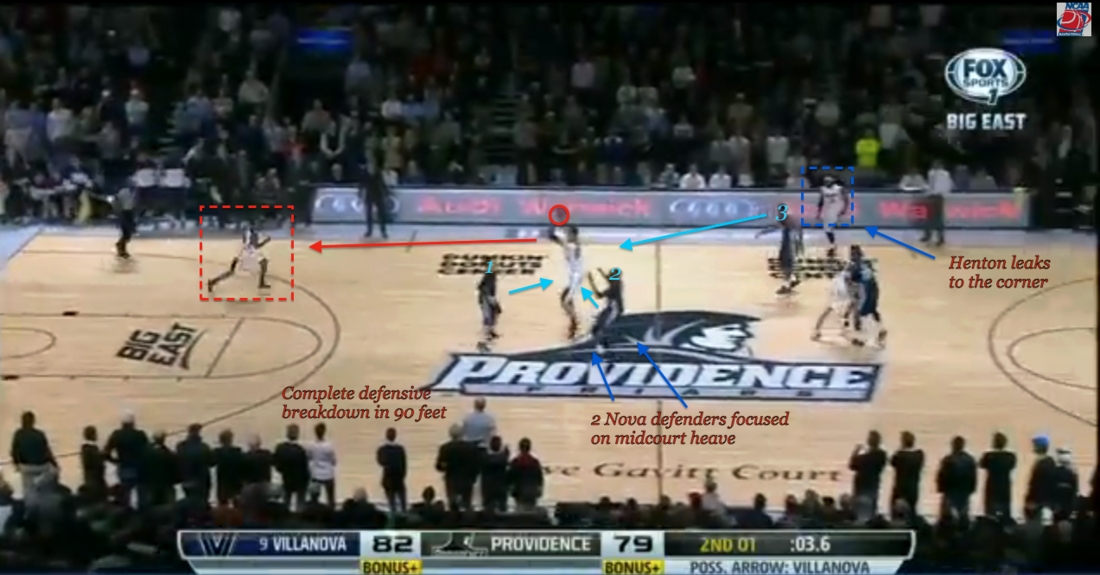 Villanova was inches from triple overtime because of a defensive breakdown that spanned 90 feet of the floor, that and they didn't foul when they had the chance. In this first shot, a PC player grabs an inbound pass from Cotton and original it seemed like an asinine play call because Cotton is the deadliest player on the floor.

That's when you get caught thinking the same way the Villanova players did.

Two players approach where the heave is going, leaving Cotton able to run free up the sideline, grab a pass and watch another screen get set for Henton on the weak side of the arc. A corner three: aka the shortest distance to the cup. This could have ended up very bad because the team didn't play defense for three seconds. 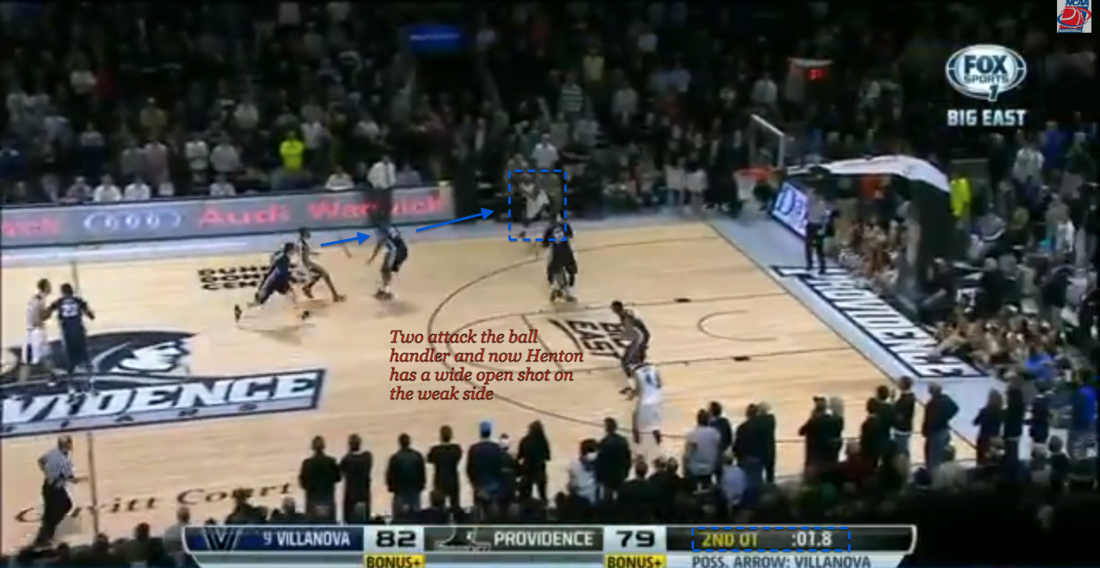 Now after the ball comes down at half court, Cotton takes it up the wing and towards the center of the floor, drawing two more Nova defenders, one from the previous man. Cotton then swings the ball to the weak side where a screen is stopping a player and Henton is waiting for his shot 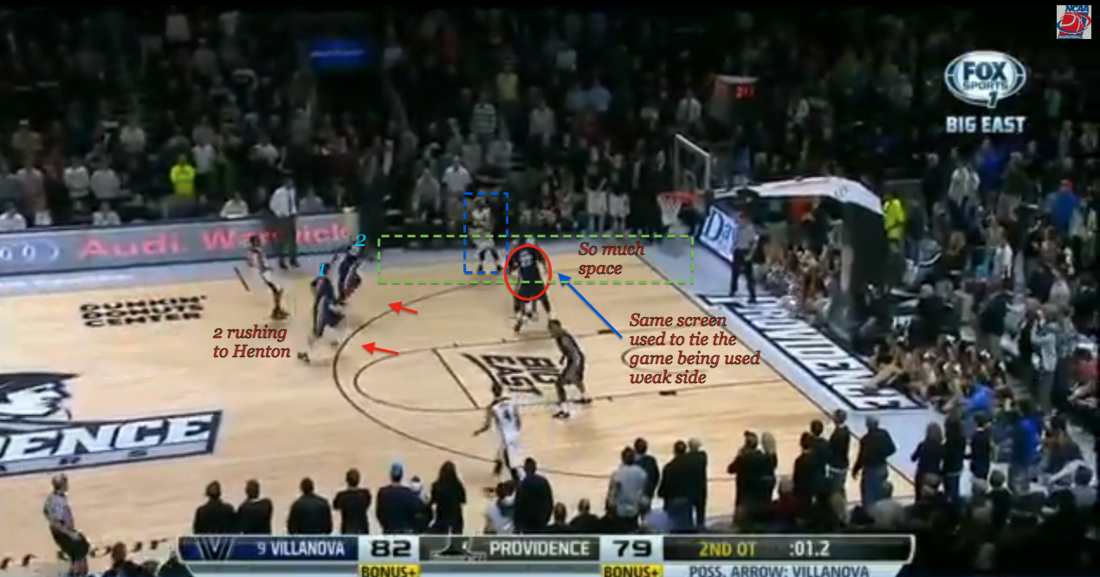 Henton literally has two more Nova players rushing to his spot on the floor as he is leaving his feet. He has an entire wing full of space and luckily for Nova, he missed the shot. Perfectly thought up plan for Cooley, properly executed by Providence, just not finished by Henton. Villanova got off lucky.

So I don't know if this means Villanova is a better team for winning a tough game on the road, if they added to how tough the game was to win in the first place. I could be wrong.