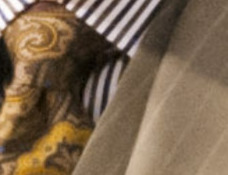 In preparation for Saturday's game at the Wells Fargo Center, Jay Wright knew how to dress for the venue. Playing in the NBA arena, the Villanova Head Coach decided to go with a three-piece suit for the Wildcats' 57-54 victory over the red-hot Red Storm.

Avid followers of the Jay Wright #SuitWatch should be able to find this outfit from very early in the season as well as able to complete the puzzle of Wright's dress. First, this outfit was initially worn on Big East Media Day and when Wright appeared with Regis Philbin on "Crowd Goes Wild".

Components have been brought out through various other games on the season. The beige pinstriped three-piece suit (featuring a third watch pocket) as well as the blue and tan striped shirt were paired together around the holidays against Rider. The tie, light tan-based paisley was previously worn in the season's first victory against Seton Hall. He wore tan shoes with laces and finished the outfit off with a tan pocket square.