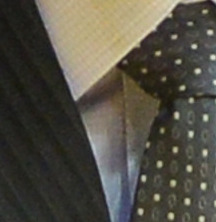 Snow doesn't put a damper on Jay Wright's sartorial splendor. In an effort to welcome Xavier to the Big East, Villanova's head coach didn't reach too deep into the closet to pull out a demure black suit as the 6th ranked Wildcats knocked off the Musketeers 81-58 behind James Bell's 27 points.

Continuing with the solid ensemble of two-pieces and three buttons, Coach Wright nearly replicated his New Year's Eve style against Butler.  The Face of Villanova Basketball donned the same black suit with faint pinstripes as well as a white shirt with a faint hatchcross pattern as he did at Hinkle against the Bulldogs. However, Wright switched up the outfit with a different black tie featuring silver & white geometric patterns.

A white pocket square finished off the ensemble.