Column: Wear Maroon if you have to . . . Villanova's uniform experiment

Unlike Oregon, Villanova has a real connection to its colors and sporting history before the Nike empire started taking over the look of college sports.

Share All sharing options for: Column: Wear Maroon if you have to . . . Villanova's uniform experiment

"Thank god it doesn't say Georgetown on the front," Jay Wright said after his Wildcats knocked off Xavier in gray uniforms.

Unlike the University of Oregon, who sold their souls and athletic branding to alumnus and Nike founder Phil Knight, Villanova has generally stayed true to its traditions. Blue and white are the Wildcats colors, not red like St. John's, not black like Providence and certainly not gray like Georgetown. Villanova's identity was up for debate for much of its existence, but until recently, it was never really for sale.

Last night's gray uniforms were a step toward Nike's blanding of college athletics, where schools wear colors not out of tradition, but because they might look just a little bit cooler than the colors and shades that they may have built their traditions on in the past. Toss out a color palette for whatever might sell? Sure. Wearing a rival's colors? Not a problem. This is Nike's version of the NCAA, where tradition only goes as far as its replica can be sold for a 300% mark-up.

Villanova has never worn gray before and the color has not been a part of the school's identity at any point in the recent or distant past. The color has no meaning -- unlike Marquette's pink jerseys, worn for cancer awareness -- other than Nike's desire to sell an alternate jersey design to consumers.

Having just two jerseys -- home and away -- is just not feasible in 2014 it seems. Uniform and footwear sponsors are determined to add another option (or two, or five) to each team's locker room. The more threads a team has to wear, Nike has learned, the more money their fans will spend to stay outfitted in the latest and coolest-looking gear. 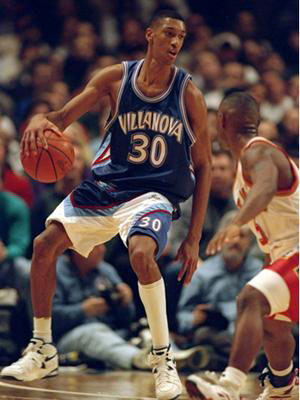 So, here's the compromise I would suggest: Bring back maroon.

It isn't a pretty color, but it is Villanova's color. The school adopted it for uniforms and logos during the Steve Lappas era, and greats like Brian Westbrook and Kerry Kittles were photographed in uniforms displaying the purple-ish red shade.

It also isn't a color worn by any team in the Big East, by any current or former rival, it just is.

Need a third alternate jersey? Toss some Maroon on it and lets go.

It might even be a prudent idea. Five out of ten Big East schools wear blue and white and all but two have some shade of blue in their colors -- Providence College and St. John's are the two non-blue members of the conference. Having a third color that is distinct from the prevailing color-scheme would be helpful in standing out. Marquette often features their gold and Georgetown is known for their gray, despite both having blue as their other color.

Sure, the Kittles-era uniforms looked goofy, but you don't have to bring those back to embrace the accent-color that was once adopted on the Main Line. The tradition remains strongly blue and white, but at least for the brief stretch where it was common, maroon was a color that Villanova owned. Nobody else laid claim to it, at least not among the Wildcats' common opponents. That made branding stronger and allowed the 'Cats to distinguish themselves from the blue and white masses.

Blue and white isn't a color scheme limited to the Big East, those colors are the fifth most-common combination in college sports, in addition to the Big East, there are UNC, Duke, BYU, Penn State, and UConn among the notables. Villanova can't even claim to be the only blue and white Wildcats in the nation, with Kentucky ever-present on television.

It's no wonder that Villanova would be accepting of a third color for uniforms based on that laundry list as they seek to further entrench themselves as a distinct identity. Distinction, however, doesn't come by wearing another school's colors. It doesn't have to be maroon, but it shouldn't be gray, and at least the maroon coloring has a history at Villanova, whether we want to embrace it or not.