A fun addition when you watch Villanova on TV.

Share All sharing options for: Villanova Basketball BINGO: Watching the Wildcats on TV? Play a game.

One of the main attractions of the new Big East was the television deal the conference made with Fox. Along with being a prominent high-major program, the result has been that, each of Villanova's 31 regular season games has been on national television this season. 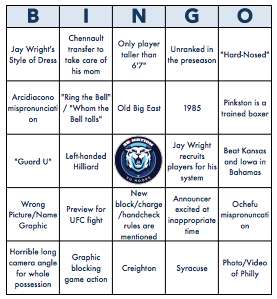 Sure, the USC game was difficult to track down for most on AXS, and Lafayette was a challenge on Fox Sports 2, but the balance of the games were televised on the widely found channels- CBS Sports Network, NBCSports, FSN, CBS, and, most frequently, Fox Sports 1. The latter will show 20 Wildcat games through the regular season plus each game of the Big East Tournament.

This greater national visibility has helped 'Nova's reach in to AP Pollsters'  living room as well as Nova Nation outside of the tri-state area.

The downside is that FS1 games, in their infancy, have become formulaic and commical to watch. One can sense what will be shown or said next, fans wait for a wrong graphic, and announcers still have troubles annunciating Ryan Arcidiacono and Daniel Ochefu's names.

So why not have some fun with that? We introduce Version 1 of Villanova Basketball TV Bingo.

Download the PDF, print it out, cut the Bingo cards out, and play with your friends. When you're watching Jay Wright's Villanova Wildcats play, follow along and play Bingo with the squares on your card.

If you have any suggestions for squares on future cards, sound off in the comments...