After a Thursday filled with Big East action, the semi-finals are officially set up. We have the Creighton Bluejays-Xavier Musketeers and... the Seton Hall Pirates-Providence Friars?

Do I even have to go through the noon recap? No I'm not happy about it. Seton Hall stuns Villanova on a buzzer-beating shot by Sterling Gibbs to win 64-63. Villanova struggled through the first 35 minutes of the contest, starting out 1-11 from beyond the arc. The Wildcats trailed by 13 at one point, but a 16-0 run erased that deficit, thanks mostly in part to Josh Hart who finished with 18 points and 8 rebounds. Darrun Hilliard made a floater with 10 seconds left, but Gibbs made sure the Pirate ended on top. James Bell had the worst game of his career, with 3 points on 0-8 shooting.

In the 2:30 outing, Providence took on the St. John's Red Storm. The game was considered an elimination game as both teams are considered "First Four Out" according to Joe Lunardi. The Red Storm were on their own court, however they struggled from 3 (5-17) and from the charity stripe (13-26). D`Angelo Harrison led the scoring for SJU with 21 on 6-17 efficiency. Chris Obekpa only played 2 minutes in the contest, racking up 3 fouls and no stats. Bryce Cotton of the Friars had his own shooting woes like Bell, going 1-10 and starting 0-3 from FT. He would make his next 10 to finish with 12 points and 4 assists. Josh Fortune was the leading scorer overall at 24.

The DePaul Blue Demons can put away the glass slippers as they could not continue the miraculous BET run, falling to Creighton 84-62. This was never out of Creighton's hands, taking a 49-29 lead at the half. Once again, Doug McDermott hits the record books. He set a Big East Tournament record for points in a half (27) and points by a debut player (35). He also tied the record for 3's in a BET game (7) which were all in the first half. The Bluejays finished the day shooting 60.4% and 63.6% from beyond the arc. DePaul senior Brandon Young was the only Blue Demon starter to go for double digits, leading the team with 22 points and 8 rebounds in what most likely is his last game. No Seton Hall-DePaul final for you.

In the finale, the Xavier Musketeers withstood the Marquette Golden Eagles 68-65. Seniors Davante Gardner and Chris Otule for Marquette did not have stellar closing performances, with Gardner only going 4-6 for 9 points and Otule not attempting a field goal. Xavier used Semaj Christon and a late surge by Matt Stainbrook to stay atop the Golden Eagles, in a game where Gardner obviously had trouble getting by Stainbrook. Justin Martin, however, was the leading scorer for the Musketeers with 19. Marquette shot 57.8% in the losing effort.

Seton Hall will face off against Providence at 7:00pm tomorrow, and Creighton will welcome Xavier at 9:30. All the action is on Fox Sports 1 and Fox Sports GO.

With Villanova out, I hope you all still find an interest in this conference tournament. Being as weird as it is. 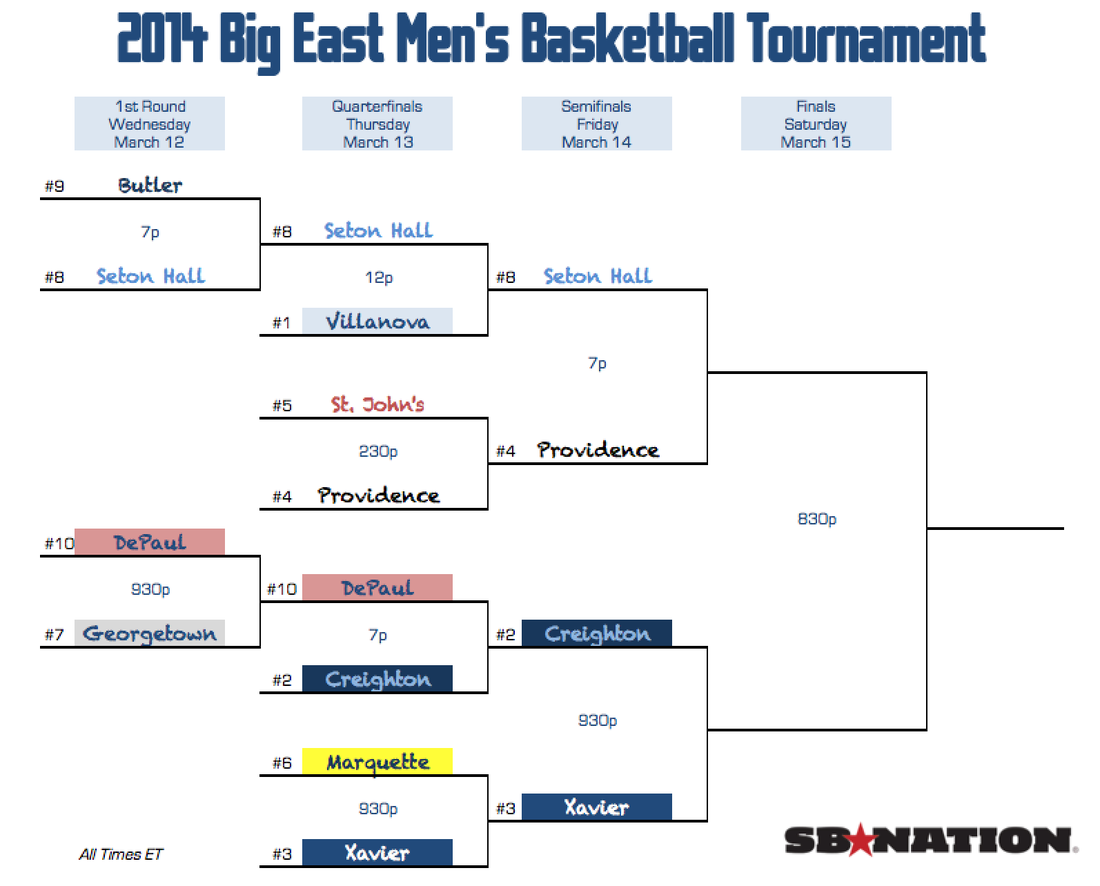