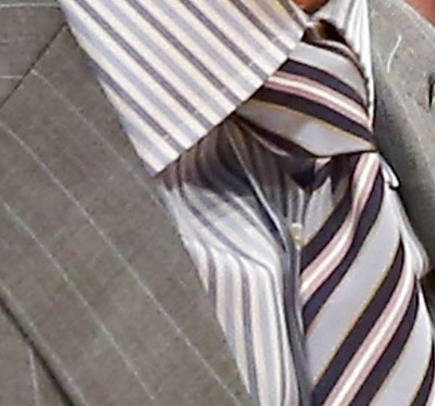 The Big East regular season champions Villanova Wildcats didn't get their expected result in their 64-63 loss to Seton Hall on Thursday in the Big East Tournament, but one thing was consistent; Jay Wright's stylish dress.

Followers of #SuitWatch will note that Thursday's suit wasn't too far in the back of Wright's closet as the Villanova Head Coach wore the same suit just 10 days earlier against Marquette. The Light Gray should have been a winner.

Returning his 2-piece, 3-button pinstripe look, Wright went with the same broadcloth shirt of navy and light blue stripes as in the game against the Golden Eagles but switched up the tie going with a daring stripe-on-stripe look. It was the same tie as worn in the first meeting against Georgetown; consisting of a gray, black, and white stripes.

He finished off the ensemble with a light gray pocket square.