Big East Tournament 2014: Providence and Creighton will face off in the Big East Final

Providence will have the opportunity to guarantee it's entrance into the Big Dance with a win in the Big East Finale.

Share All sharing options for: Big East Tournament 2014: Providence and Creighton will face off in the Big East Final

There were no upsets this day, as favorites Providence and Creighton managed to handle their opposition and will face off at 8:30 tomorrow night.

In the first game at 7 p.m. we had the Providence Friars taking on the Seton Hall Pirates.  Providence ended Seton Hall's fairy tale run, winning the game 80-74.  There was a slight hangover from their victory over Villanova the previous night. In the 1st half, Seton Hall struggled to find rhythm in their offense.  Even though they dominating the paint with a 16-8 margin, Providence largely controlled the game.  But in a game where every touch foul was called, it was hard to find a flow within the game.  Brian Oliver's big three at half time cut Providence's lead to four at the half, but that is as close as the Pirates would get all game.

Seton Hall was behind the eight ball most of the time, with Eugene Teague in foul trouble.   They were a different team with him on and off the floor.  Without him, they settled for jumpers early in the 2nd half.  Providence continued to light it up, Tyler Harris, who only had three points in the 1st half, started out scorching, with 10 points in the first couple minutes of the 2nd half.  But the hero for Providence was LaDontae Henton, who scored 26 points and grabbed 14 rebounds.  His ability to score outside and inside tormented Seton Hall all night.  With their continued proficiency from the free throw line and their lack of succes against the 2-3 zone, the Friars were able to hold off a late run by the Pirates.  They will be headed to the Big East Final for the first time in 20 years.

For the night cap, we had two tournament teams in the Creighton Bluejays going against the Xavier Musketeers.  Doug McDermott started where he left off, scoring a host of different ways.  Creighton was able to jump out to a quick lead with three 3's before the first TV timeout.  Xavier handled Creighton's initial run with the aid of a Semaj Christon.  But McDermott's off the ball movement caused many problems for the Xavier defense, which enabled Ethan Wragge to get hot from behind the arc.  Creighton was able to open up a 17 point lead before it was lowered to a 12 point lead heading into half.

In the first six minutes of the 2nd half, Creighton shot 5-6 from three and they were able to open it up again, to an 18 point lead, 58-40.  The excellent ball movement by Creighton lead to lots of open shots, they were scoring at will.  But slowly Xavier was able to chip away at the lead, going on a 12-1 run at one point, cutting the lead to nine points.  Xavier held Creighton without a basket for almost five minutes in the second half, which enabled Xavier to make a comeback.  Isaiah Philmore was able to carry the Musketeers, along with Christon, and close the gap to six points.  But after cutting into the lead again, making it a five point game, Creighton was able to ice the game on the free thrown line and hold off Xavier, winning 86-78.

Creighton will now attempt to win the Big East in it's first year in the conference and Providence is looking to secure it's place in the NCAA Tournament, and break their 20 year drought with a win Saturday night, at 8:30. 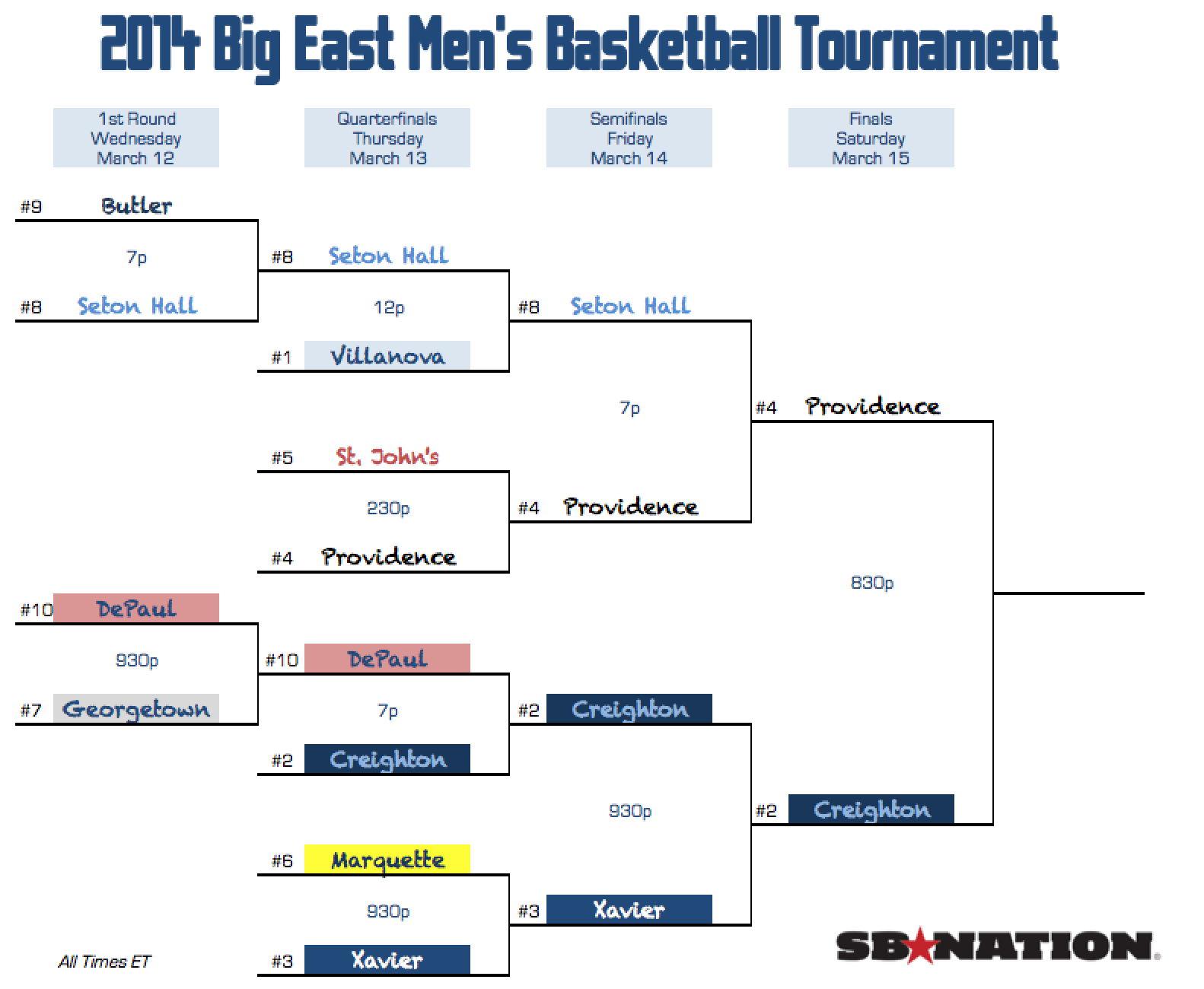