Share All sharing options for: NCAA Tournament 2014: Villanova's road ahead 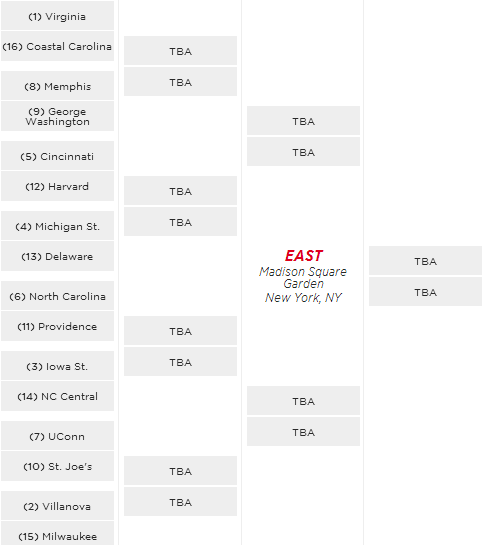 There it is: the wall between Villanova and the Final Four. The consensus is that the Midwest is the "Group of Death," however the East region is no laughing matter. Both Seth Davis and Doug Gottlieb picked the Michigan St. Spartans to reach the Final Four as the brackets were announced. Are the 'Cats doomed?

A lot of teams in this bracket are fresh in Villanova's mind. The Cincinnati Bearcats and Connecticut Huskies are former Big East opponents, while the St. Joseph's (PA) Hawks are the most familiar foe due to the annual Holy War meeting.

Villanova played, and beat, the Providence Friars twice this season in Big East action, and the Delaware Blue Hens were an out of conference opponent this year too.

While the analysis from the media and fans alike will be nonstop for the next several days, freshman Josh Hart is just eager to get back out there.

"We're definitely ready to get back on the court. We have a bad taste in our mouths. When we get on that court, we're playing for each other."

Both Hart and Kris Jenkins are very eager to be part of March Madness for the first time. "You grow up watching the NCAA Tournament. It's one of the biggest things. It's really exciting going up there [to Buffalo] and being on the big stage." Jenkins echoed these sentiments: "It's just amazing; you grow up as a kid and you watch this on TV. You want to be a part of it with these group of guys. It's just a great experience."

Coach Wright emphasized fast starts when playing in the tournament. "You can't have a game where you come out flat. You come out flat and you play catch-up. After that, it's matchups."

Jay also noted that "there was a four-year stretch where we lost to the eventual champion." Hence another reason why he emphasizes those matchups - both on the court and the within the bracket. When asked if he believes if his team can make a major run, he shockingly said "I do. I think we have the depth. I think we can score. But we've also proven we can lose to anybody. However there are teams that are separating themselves. You have to look at Florida, Louisville, and Virginia. I think those are the favorites."

Senior Nick McMahon doesn't believe the excitement level is any different. "It's huge. My freshman year we came in and we were 6th in the country. So, we know what it's like to be on top, but also how easy it is to be taken away. "

All the players had one thing in common, and that's an unfamiliarity with Thursday's opponent, Milwaukee. When asked if he's watched any live games of the Horizon League, Darrun Hilliard replied "No I haven't." McMahon had "only seen a few of their scores and highlights." However, all agreed that they just have to bring their A-game and prepare." McMahon ended with saying the following: "Take it one game at a time."