Dust off the history books and see how the Wildcats fare historically.

Share All sharing options for: NCAA Tournament 2014: Villanova's History in the Tourney

The tournament giveth, and the tournament taketh away. Such is the story of Villanova’s love-hate relationship with March Madness. The Wildcats win when they're not supposed to (see 1985 Championship) and lose when they’re a lock (yes you, St Marys Gaels). Their on-again-off-again postseason success is less predictable than your freshman year roommate and his girlfriend. And pending whether or not this year’s Big East Tournament is any indication of their future, Nova could be at the peak of the roller coaster or the end of the ride. Let’s reminisce and look back at all the fun.

Few people know this, but Villanova actually made the Final Four in its first tournament appearance in 1939! It was the first ever NCAA Tournament, too. Call it beginner’s luck, or call it an eight team tournament. Either way it’s in the books. They would eventually fall to Ohio State in a high octane 53-36 loss.

Villanova had a lot of trouble in its early years. They didn't win multiple games in the NCAA Tournament until 1962. Well, unless regional third place games count. And yes, those existed. Al Severance’s squad declawed the Princeton Tigers in the 1955 East regional third place match. Can you say bragging rights?

Jack Kraft quickly found postseason success as a coach on the Main Line. In his second season, the 1962 tourney team defeated West Virginia and NYU before losing to Wake Forest in the regional final. And then we beat Princeton again in 1964 to steal third place in the East. I’m sure that still stings.

Kraft’s fifth big dance led the Wildcats to the 1971 NCAA Championship. They won over St. Joe’s, Fordham, Penn, and Western Kentucky by an average of 18.5 points. Unfortunately the streaking ‘Cats fell to John Wooden’s UCLA Bruins. The 1971 title was Wooden’s fifth straight and seventh overall. They would win 4 more titles before letting other teams have fun. 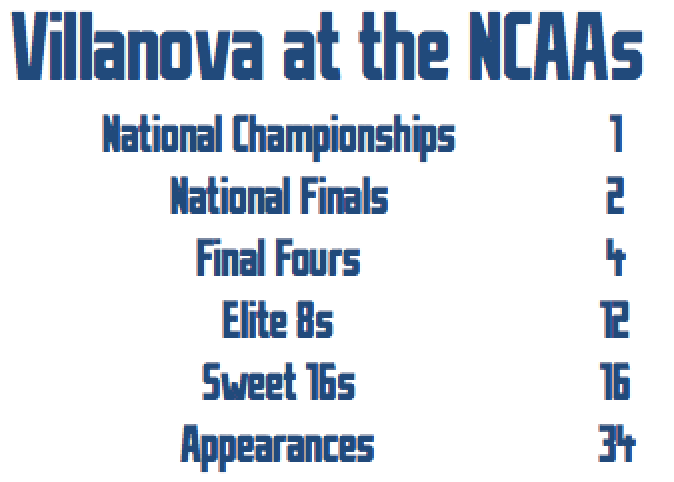 Everyone knows what’s coming though. Leading up to the 1985 Championship, Villanova did pretty well. They earned 9 tournament trips between championship appearances. Rollie Massimino hit his stride in the 1980’s, making all but 2 tournaments in the decade. The decade’s tournament record was an impressive 17-7. None of those postseason trips ended in the first round, either.

But nothing will top the vaunted 1985 NCAA Tournament Championship. The road to the finals was not easy. The eighth-seeded Villanova had to overcome Dayton, Michigan, Maryland, North Carolina, and Memphis just to reach Georgetown. The championship featured an epic effort from the Wildcats, including a 78.6% shooting performance from the floor and an 81.5% free throw conversion rate. Ed Pinkney was the star of the team, but Dwayne McClain led the game with 17 points and a rhyming name. Patrick Ewing chipped in 14 for the Hoyas. My own hometown hero from Wakefield, MA Mark Plansky logged one minute in the game. Villanova remains the lowest seeded team in NCAA history to win the championship.

Villanova met less success in the years following that perfect run. Other than a trip to the Elite Eight in 1988, Nova did not advance past the second round for 20 years.

Exit Rollie, enter and exit Steve Lappas for some very mediocre appearances. Most notable is the 1995 First Round loss to Old Dominion when Kerry Kittles, Jason Lawson, Alvin Williams & company lost in triple overtime to the 14-Seed.

"There was a four-year stretch where we lost to the eventual champion." -Jay Wright

Jay Wright took four years to make the NCAA tournament, but wow did he come on the scene hot. Nova won two games in 2005 as a 5-seed against Ohio and Florida before losing by one point to North Carolina, the eventual tourney champs. Villanova earned a 1-seed the next year and rode to the Elite Eight, before losing to eventual champion Florida. I guess we were other teams’ good luck.

In 2007, ninth seeded Villanova lost to Kentucky in the first round. 2008 brought an overachieving Nova squad to the Sweet Sixteen as a 12-seed. And of course, Scottie Reynolds brought the ‘Cats to the Final Four in 2009 as a 3-seed with his coast-to-coast floater. Of course they fell next game to North Carolina, who eventually won the championship...

The combination of Jay’s success and Villanova’s 2-seed had fans excited for the 2010 tournament. However Jay and Scottie could only scoot by Robert Morris by 3 before Saint Mary’s completed the most frustrating upset ever. The Wildcats then lost to George Mason 61-57 in the first round of 2011, failed to make a tournament in 2012, and lost to North Carolina 78-71 in 2013 as the eighth-seeded team.

This is the Villaova's 34th NCAA Tournament appearance where the Wildcats own a 49-33 (.598) all-time record. Jay Wright is personally 12-8 in the tournament as Nova's head coach.

Villanova has appeared in the Sweet Sixteen – get this – 16 times. They are 10-6 in those games. Nova is 4-8 in the Elite Eight, 2-2 in the Final Four, and 1-1 in the NCAA Finals. It should be noted that these stats include the dinosaur ages when far fewer teams received bids to the tournament. In other good news, the Main Line university is 24-9 in first round matches. Oddly enough Villanova is 25-9 in the first round of the Big East Tournament.

Two random stats must be mentioned. Villanova is 2-1 in third place games. Please hang this over the heads of your Princeton friends. Secondly, and far more impressively, is that Villanova holds the record for the most underdog wins in March Madness since seeding began in 1979. The Wildcats have 15 wins against opponents seeded higher than them.

With the record books cracked open, how much do you think history indicates current results? Will the Wildcats put together another good run as Jay Wright did multiple times in the 2000’s, or will the Wildcats squander their opportunity for postseason success?