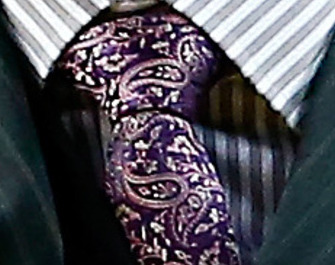 New York is New York, whether you're in Manhattan or Buffalo. Villanova Head Coach Jay Wright pulled out an exquisite look for the Empire State as the 2-seed Wildcats ultimately defeated the Milwaukee Panthers, 73-53 at First Niagara Arena on Thursday night.

It was not a new look for the season by any stretch of the imagination. Astute followers of #SuitWatch would even note that this outfit has been displayed in Upstate New York as it was worn at the Carrier Dome against Syracuse and more recently against Providence.

Jay pulled out one of Gabe D'Anunnzio's best for the NCAAs. In a return to three-pieces, Wright donned a charcoal suit with pinstripes that featured contrasting wood-grained hardware. He matched the suit with a faint-purple broadcloth striped shirt and a purple-based paisley tie.

Looking at other details of Wright's dress, his shirt had a two-button barrel cuff and he did not sport a pocket square. In its place, Wright wore a commemorative 2014 NCAA Tournament- Buffalo lapel pin.