Too simple for the Round of 32. 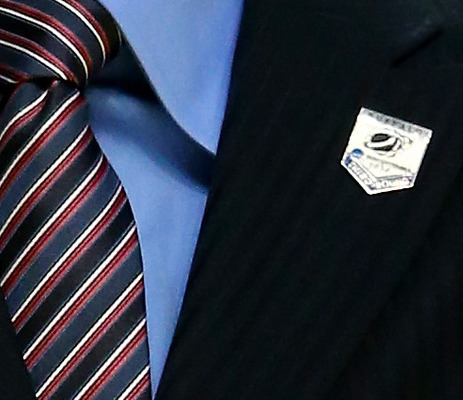 The final installment of #SuitWatch is sadly here for the 2013-14 Villanova Basketball season.

For Villanova fans, the Wildcats' depressing loss 77-65 loss to Connecticut was also compounded by the uninspiring style sported by Head Coach Jay Wright on the sidelines.

The individual components were, as usual, on point. Coach Wright sported a perfect-fitting two-piece, three-button black pinstriped suit (was it possibly navy?)- the same one he wore for the Wildcats first visit to Hinkle to start the Big East season.

JAY WRIGHT'S SUIT IS ONLY A B+ THERE I SAID IT

Underneath, he sported a french blue shirt and a navy-charcoal-burgundy-white striped tie. The shirt & tie combo had never born worn before and going into the archives, Wright last wore the tie in February 2013 against Marquette.

Wright again wore a commemorative NCAA Tournament lapel pin and finished the outfit off with a barely-visible burgundy pocket square.

Individually, the pieces were exquisite, but together the complete look was pedestrian and did not work.

The most interesting Style Note from the Round of 32 came during the Post-Game Press Conference. In the modern day conundrum of 'Shirt Pocket or Not?' it appears that Gabe D'Anunnzio has solved that with the compromise of an inlaid pocket- check out the detail below...