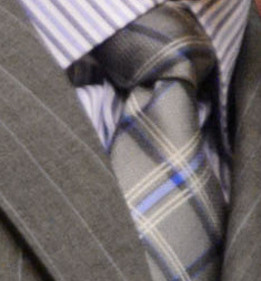 It was the penultimate home game of the 2014 season and in an NBA Arena; perfect reasons for Villanova Head Coach Jay Wright to pull out his stylish best.

With Spring Break on the schedules for the student body (even with snow on the forecast), Wright absorbed the approaching equinox in the Wildcats' 73-56 victory over Marquette.

Jay went Light Gray. And in doing so displayed one of his Top 3 styles of the season. Returning his 2-piece, 3-button pinstripe suit that saw the sideline against Temple, Wright switched up the shirt and tie for a very business-like display. Instead of a plain white shirt, the Villanova coach went with a broadcloth shirt of navy and light blue stripes that was matched with a light gray based plaid tie with white, black, and light blue.

He finished off the ensemble with a light blue pocket square.