Share All sharing options for: Bracketology: Jerry Palm puts Villanova on the 1-line

Villanova's fortune swung to the extreme positive side of the pendulum on Tuesday night- without even playing.

First was news out of Cincinnati that Xavier center Matt Stainbrook has suffered a sprained MCL and will not be available for Thursday's tilt against 'Nova. Stainbrook's 10.6 ppg and 7.8rpg will leave a gaping hole in the Musketeers' already thin front court.

A few hours later the Wildcats got some positive results. Rival Georgetown's 75-63 upset of Creighton on the Hoyas' Senior Night helped the Hoyas and the 'Cats. The win over #13 Creighton not only improved the Hoyas' position on the Bubble, but he loss by the Bluejays (23-6, 13-4) gives the Wildcats (26-3, 14-2) a 1½ game lead in the Big East Standings with two games to play.

More importantly, on the national scene, #7 Syracuse lost to Georgia Tech at the Carrier Dome, 67-62. That loss by the Orange (their 4th on 5 games) has catapulted the Wildcats into a 1-Seed in CBS's Bracketology completed by Jerry Palm. 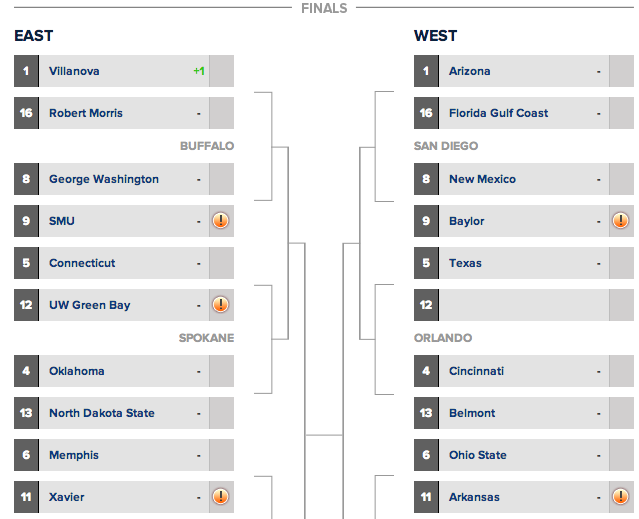 A #1 Seed. Who saw that coming? This Villanova Wildcats squad is real. And they are in control of their own destiny for the rest of the 2013-14 season.