There's still just one team locked into seeding with only a few games left in the season. Excitement!

There were pretty fantastic games on Tuesday night, and both not only impacted the Big East Tournament bracket but could propel a couple of teams into the NCAA Tournament as well. In the early game, Markel Starks' amazing performance helped Georgetown took down Creighton on Senior Night to put Villanova in prime position to win the Big East regular season title and lock up the top seed in New York.

In the later game, a thrilling affair between Marquette and Providence on the Friars' Senior Night lasted two overtimes before Bryce Cotton hit two free throws late to keep Providence on the right side of the NCAA bubble (for now).

Here's the current Big East bracket if the season were to end today. There are no games tonight so our next update will be on Friday. 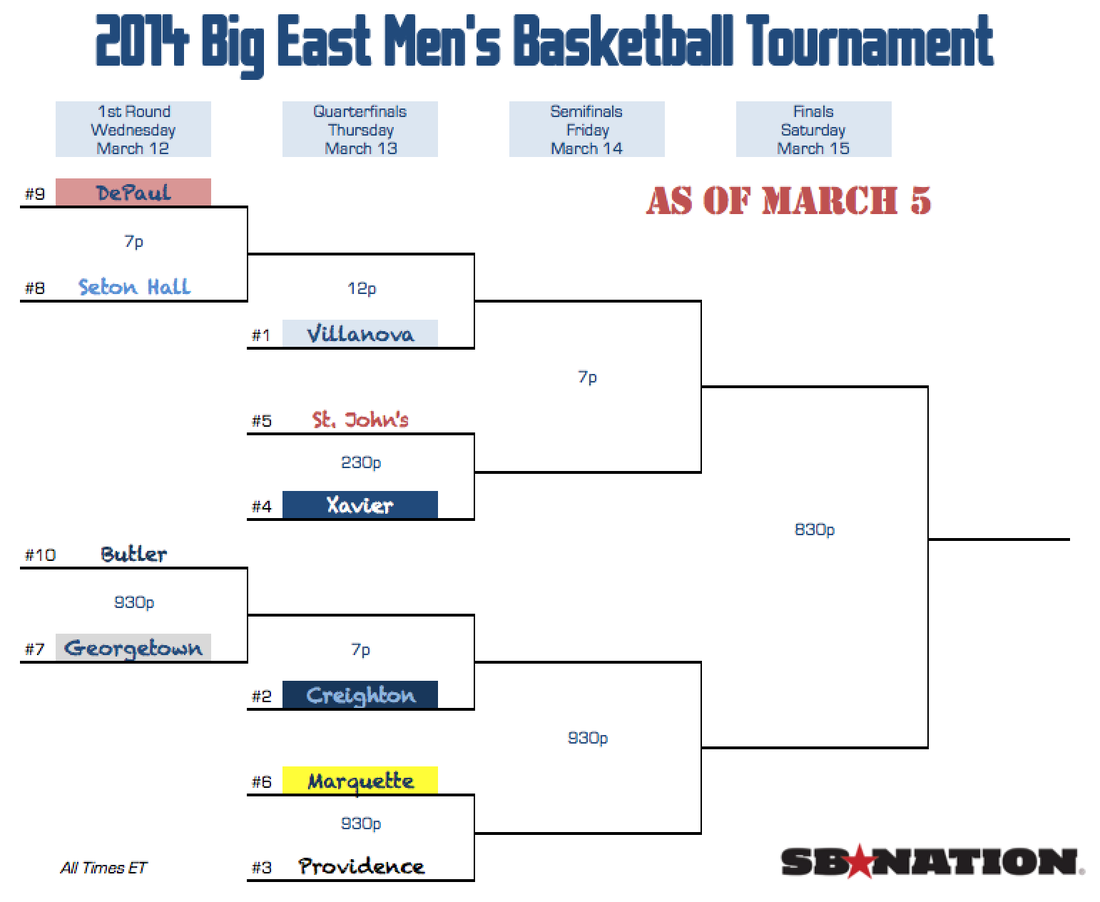 Villanova can win the outright Big East championship by beating either Xavier on Thursday night, or Georgetown on Saturday. If Villanova can't get it done, Creighton can take back the top spot with a Senior Night win over Providence on Saturday. 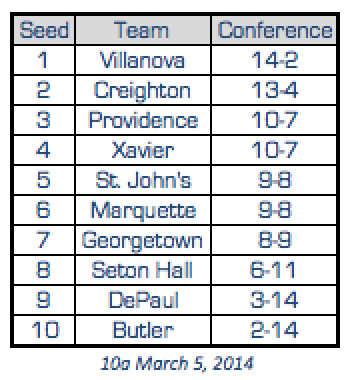 Shifting to the cellar, Butler travels to DePaul on Thursday night in an attempt to get out of last place. A Blue Demons victory will lock them into the 9th seed, while Butler would need to win on Thursday and beat Seton Hall on Saturday to climb out of last.

Seton Hall is locked into the 8th seed. Nothing will change there so book your tickets now, Pirates fans.

Providence moved up to the 3-seed with their win last night, and they currently own the tiebreaker for that spot with Xavier due to their win over Creighton. Xavier, could regain that third spot with a win against Villanova. The Musketeers would stay at the 4th seed for good with a loss to 'Nova.

St. John's and Marquette play on Saturday in a game that is essentially for the 5th seed since Providence and Xavier both own victories over Creighton that will work well for them in the tiebreakers.

Georgetown can still move up to the 6th seed with a win on Saturday over Villanova, coupled with a Marquette win over St. John's.

As a reminder, the next update will be on Friday.