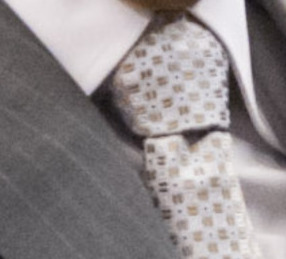 The Big East regular season championship and #1 seed had already been claimed It would have been easy for Jay Wright and the Villanova Wildcats to let down in their season finale; but it simply is not in either's DNA.

Jay Wright would wear Hoya Gray in front of 18,828 at the Wells Fargo and look good as the 'Cats would ultimately win their 28th game of the season by defeating rival Georgetown, 77-59.

Followers of #SuitWatch will note that Saturday's suit wasn't too far in the back of Wright's closet as the Villanova Head Coach wore a similar suit just last week against Marquette. The Light Gray is a winner.

Continuing his 2-piece, 3-button pinstripe suit that saw the sideline against the Golden Eagles and Temple, Wright switched up the shirt and tie for simplicity. For his shirt, Wright went white. He paired it withe a silver tie with micro-geometric shapes.

Throughout the regular season Coach Wright showed his affinity for stellar style. The man is keen to sticking to basicsand classics while also showing a penchant for new trends including tattersall. It is exciting to see if anything new come out of his closet for the post-season tournaments.