With a big win in State College, the Villanova Wildcats have officially gotten the attention of the voting committee. Via College Crosse, Villanova has received votes in the latest College Lacrosse Poll. 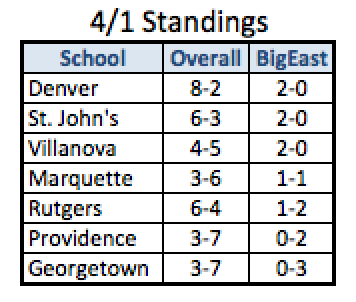 While "receiving votes" may seem gloomy, this is a big turnaround after a rough start for the 'Cats squad. A 1-5 start put Villanova in a tough spot right off the bat. The rough stretch was not to blame on poor play (fully). Of the first 6 games, 5 of them were played against ranked squads at the time. However, the Wildcats have made a sudden turnaround, winning 3 straight and starting 2-0 in the Big East conference.

The most recent victory, a 9-7 win against the then-#17 Penn State Nittany Lions on the road, officially brought Villanova back to national relevance. The loss forced Penn State completely out of the Top 20. Only in the coaches poll did PSU get any votes.

Senior Kevin O'Neil leads the team this season in goals (16) and points (22). The defense is backed by freshman goalie Dan Willis who puts up a respectable 47.4% save percentage and a 9.39 GAA.