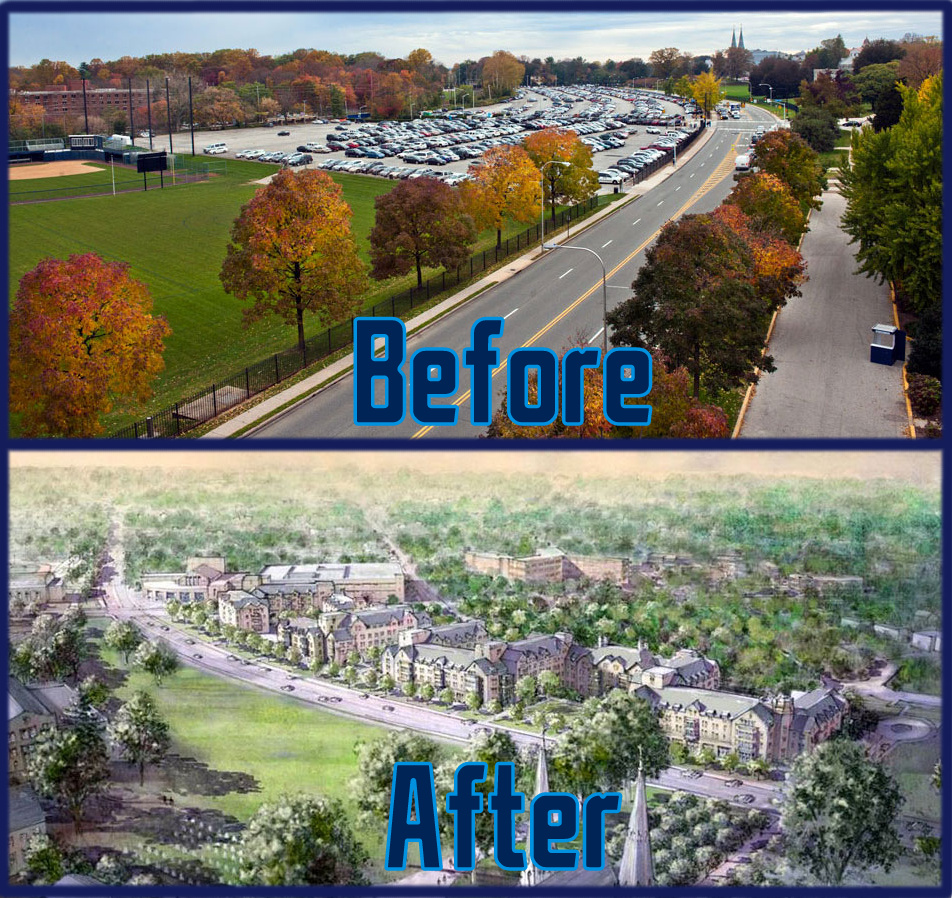 A 4-2 vote by the Radnor Township Board of Commissioners on Monday will change the local zoning code allowing Villanova to move ahead with the University's Lancaster Avenue Project.

Despite local residents spending upwards of $25,000 to oppose the Project and the Board's rejection of the zoning ordinance in May 2013 and again last December, this is a large hurdle that Villanova has crossed; one that signifies major progress towards enhancing Lancaster Avenue.

The "Hamlet of Villanova" will develop the south side of US30 (Lancaster Avenue) that currently serves as a parking lot into housing, retail space, garage parking, and, possibly, President Fr. Peter Donohue's prize Performing Arts Center.

At an estimate $270m dollars, the gothic style architecture would be completed in a phased approach over 3-5 years. The main benefits of the project will be:

Hurdles, next steps, and timeline for the University are still unclear to the public. The First Phase of the Project would include a 15-month period to present Final Designs before a ground breaking could occur.

The Parking Structure would be the first buildings constructed with initial estimates of 12 months. The Mixed-Use space of Residences and Retail would be a two-year construction effort.

There is still a long road ahead before construction begins for Villanova, but this development from Radnor is one in the positive direction for the University's Campus Master Plan.

One of the deciding votes in Villanova's favor was cast by William Spingler, who has now been hit by an ethics complaint. The Radnor Commissioner has moonlighted as event security for Villanova at various sporting events since 1982 -- a practice he ended in February, when complaints from the community began to surface. The board member does not receive any money from Villanova, working for the company Event One, and he reportedly donates all of his pay from the job to the local Little League organization.

Township solicitor John Rice gave Spingler approval to vote on Monday night rather than recusing himself. At least one resident, Jim Yannopoulos, has threatened to challenge the vote in court.