Summer basketball tournaments are free-wheeling events that bring in players from various levels and leagues. This tournament, however, has a different hook.

VU Hoops readers are no strangers to Summer basketball league coverage. We've followed the exploits of both current players and alumni as they suit up to spend their Summers in small and sweaty high school gyms, playgrounds and the occasional college arena. This summer, however, a group is trying to power a single-elimination tournament through social media.

It's called simply,Â The Basketball Tournament (TBT), and it may be the event that brings one of Villanova's best teams of the Jay Wright era back together on the hardwood.

Teams are formed and entered by anyone, with no playing credentials required, however, only 32 teams will actually lace up their sneakers to compete. In order to make the field, teams are required to accumulate registered fans on the TBT website. Every team will need to reach at least 100 fans in order to qualify for the event (45 have already qualified), with the top-24 teams by fan-count being automatically included and another 8 teams chosen by organizers from the qualified group. 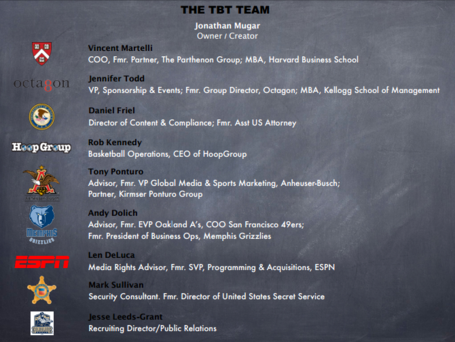 While there are some teams with few recognizable names, there are plenty of registered teams that college hoops fans will find familiar. The core of Villanova's 2009 Final Four squad has signed up, with Scottie Reynolds, Reggie Redding, Dante Cunningham and Dwayne Anderson being supplemented by Antonio Pena, Corey Fisher, Maalik Wayns and Mouph Yarou onÂ Team ROBY. They were assembled when TBT's organizers reached out to Dwayne Anderson through Penn State team manager Austin Buntz.

Jon Mugar hatched the idea for an open tournament years ago, according to Jesse Leeds-Grant, TBT's Recruiting and Public Relations director.

"About 3 years ago, founder Jon Mugar thought, 'what would happen if March Madness were open to anyone?,'" Leeds-Grant wrote. "He wanted to give teams the ability to organize themselves and play basketball at the highest stakes in the world. It comes from his love of fantasy sports and high stakes, team-first basketball."

In addition to Mugar, the team behind the tournament includes former consulting firm partners like COO Vincent Martelli, AUSA's like Daniel Friel, marketers, as well as Hoop Group Â NBA and ESPN executives.

There will technically be no amateur players in the field, since the winning team will be paid $500,000.00. Teams can split that money up however they want.

"The prize money is being funded by Mugar and a small investment group out of Boston," Leeds-Grant explained. "The thought was that $500,000 would be enough money to draw attention from some of the best players in the world (it has) and set the stage for a level of competitive/team-first basketball that doesn't exist outside March Madness."

Team ROBY, like the other potential participants, must reach 100 fans and have at least 7 players on its squad by the time rosters lock May 1st at noon EST, according to TBT organizers. They've already locked down seven players, but will need a few more fans as of this publication.

It's about half the million dollars that the creators of the tournament initially wanted to offer, and rather than taking place nationwide, it will be based at Philadelphia University now. This Summer is just a start for TBT, however, and if the games can draw a crowd -- and a lot of fans signed up online -- it could grow into something bigger in the future.

The tournament final, meanwhile, could be held anywhere, with fans voting on where it will be held online and will be hosted by one of the finalists -- most likely in a smaller high school gym.

>>>To support the former Wildcats' entry, head over to register your account on TheTournament.com, thenÂ find the team you want to support and click the red button on their team page to choose them.

1. Please go to: https://www.thetournament.com/teams/team-roby-nova-09-final-four target=_blank
2. Click "JOIN TO FAN THIS TEAM" (the orange button)
3. Enter your info and click "Create New Account"
4. You will immediately receive an email with a link that you click and it will take you to the main tournament page.
5. You will now be a fan of Team ROBY!

The tournament runs from June 6th through 8th at Philadelphia University, with a Final played on June 28th at a location to be decided.