As the Senior Day ceremonies concluded, the Villanova Wildcats took the field looking to gain momentum entering the Big East Tournament. Through an up-and-down battle, Villanova was able to force overtime and then double OT, however ultimately losing to the Providence Friars by a score of 11-10. The Wildcats fall to 5-9 and finish .500 in conference play. Providence improves to an abysmal 4-11 after getting their first conference win of the season.

Providence may have entered the contest on a 10-game losing streak, however they looked hot right off the bat. The Friars shot out to a 3-0 lead i nthe first 4:54 on goals by Greg FitzMaurice, Sean Wright and Bryan Annecchino. The 6-7, 200 pound Wright had his way over 6-5 220 pound Wildcat Chris Piccirilli. Johnny Gallaway would break the run with a goal assisted by Eric Gartner, but Andrew Barton would put the lead back to 3 goals less than 2 minutes later. Later in the quarter, Villanova had an opportunity on a delayed penalty, and in that time they drew another. Being two men up from 2 slashing penalties, the Wildcats would find the back of the net again. Less than :30 later, Providence's Trup Ortlieb would score, and then Villanova's Kevin O'Neil after that. With the hot start, the Friars entered the 2nd quarter with a 5-3 lead.

The 2nd quarter proved much quieter, as both sides exchanged 2 goals. Gallaway scored his 2nd goal of the game bringing the `Cats within 1, but later in the quarter Keenan Assaraf of Providence put the lead back at 2. After Devin McNamara brought `Nova within 1 with 2:16 left, it looked like the Wildcats would trail by 1 at the half, but Friars' Buck McClure scored with 2 seconds left in the half to give Providence a 7-5 lead at the half.

The two squads tied groundballs and faceoffs at the half, but Villanova led the shots battle 18-16. A hot start for Providence seemed like a fluke.

The start of the 3rd quarter seemed much like the first two. Villanova consistently overthrew to teammates, leading to a majority of their turnovers. Andrew Barton scored 2 goals within 1:12 giving him a hat trick on the day. At this time Villanova called timeout to try and regroup from a 9-5 deficit. One minute later, Piccirilli got his only goal of the game. Friars' Sean Wright would respond with his 2nd goal of the game, but O'Neil would net his 2nd of the game too with 6 seconds left. Villanova would trail 10-7 entering the final quarter of play. Freshman goalie Dan Willis was pulled in this quarter in favor of Reed Carlson.

The Wildcats would need to play tough defense to see any staying close in this game, let alone winning. That's exactly what they did. Villanova scored 3 goals at the hands of Devin McNamara, Matt McIver, and Jack Curran who netted the game-tying goal with 38 seconds left. Providence was held scoreless in the 4th and only had 3 shots on goal. The game would go to overtime.

The `Cats had their share of opportunities in the first overtime, outshooting the Friars 5-1. Two shots in particular bounced off the goalpost, and another bounced off Friar goalie Tyler Himes unbeknownst to him. There would be double OT.

There were few opportunities for each team, as Villanova and Providence alike had turnovers and more so ball movement. The only shot on either side in the 2nd overtime was by Robby Stack, and it went through. With 50 seconds remaining, the Friars scored the game winner and broke their 10-game losing streak. As you can see, they were thrilled to finally be on the winning side again. 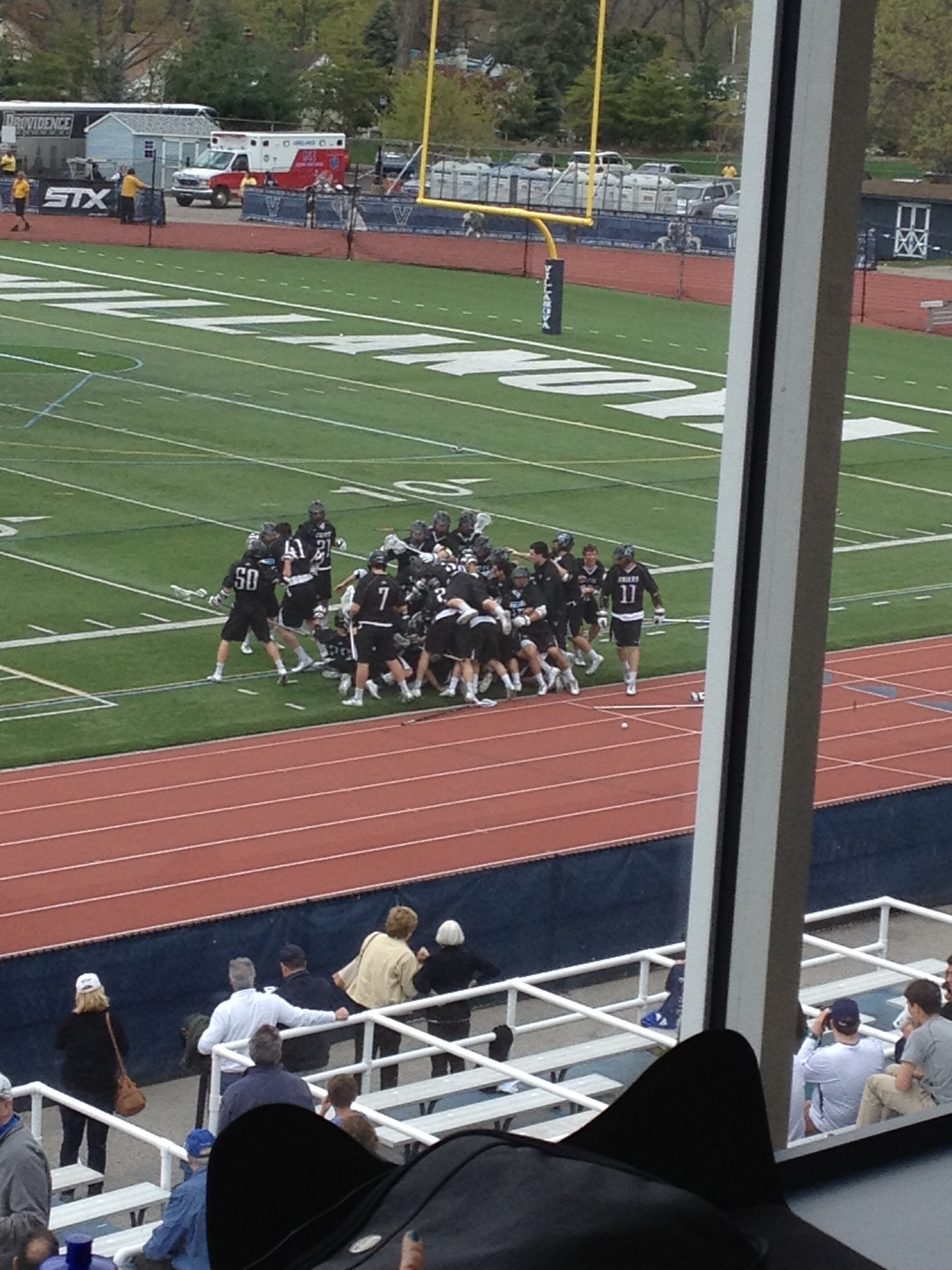 Villanova outshot Providence 42-28 on the day, meaning the Friars scored on 40% of their shots. This led to Willis finishing with only 4 saves. The Wildcats failed to clear on 6 occurrences, yet another downfall to their poor first half defense. A positive to take away from the game is penalties- the Wildcats held themselves to only 2 while the Friars committed 5.

Villanova's next obstacle is the Big East Tournament. Games will take place on May 1st and 3rd. Villanova will take on the Marquette Golden Eagles. Faceoff time is TBA.