Plotting JVP's shots over the past season shows a gravitation towards the center. 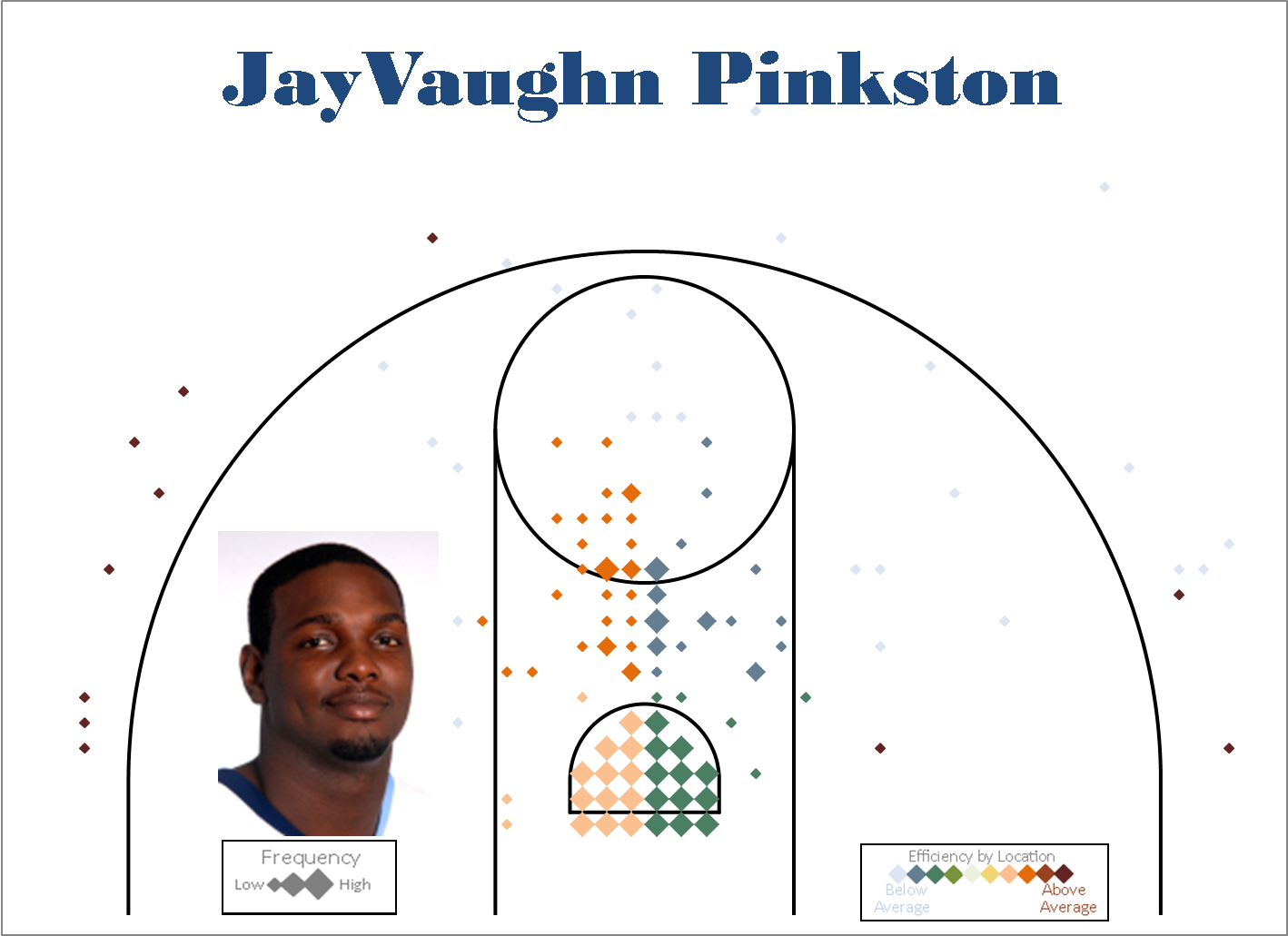 Main takes from the visual raw/data

The value of JayVaughn Pinkston (and his shot chart) is succinctly summarized by an excellent study done by 82games.com. While this is obviously based on charting NBA plays, rather than the college game, it really helps highlight the value of plays in specific locations on the court - really glad it turned up when I was doing some research for this bit.

The essential takeaway for me, as it applies to this shot chart, is the value of the exact shots JVP is taking for Villanova. So from our charting, we know that JVP was just a decent finisher at the rim, right? One thing that chart can't account for is his ability / major propensity for drawing free throws. According to KenPom's player stats, JVP drew 6.3 fouls per 40 minutes this year (good for 93rd in the country), and attempted 0.661 free throws per field goal attempt (109th in the country). One of the ‘value shots' we don't take about enough in our quest for the perfect shot selection profile is those taken from the free throw line. A possession ending in free throw attempts, whether it's 2 or 3, is almost always the most efficient in basketball. Anyone shooting over 60% on FTs will score 1.2 points per possession or more on 2 free throw attempts, which is absurdly above shots taken from anywhere else on the court.

Pinkston provides a skill that most of Villanova's players simply don't have - effective, high volume attacking of the rim and paint areas.

Almost 90% of shooting fouls in the NBA game occur where JVP takes nearly all his shots from, according the 82games.com article. The four zones (11-14 in the article, correspondingly) see significant jumps in shooting foul percentage. While only shots at the rim (13 + 14) carry appreciably better offensive ratings, according to their charting, it's tough to encapsulate the importance of drawing free throws, getting towards the bonus, and getting opposing bigs in foul trouble with literally any stats - one of the many limitations of traditional stats professionals and (us) amateurs use to help define the game. You don't need to look any further than the Kansas game (although, granted, that was Ochefu bull-rushing the rim) to see the value of getting a key big in early foul trouble - it really changed the course of that game, and helped our boys secure one of their signature wins of the season - even though both teams ended up falling short in the postseason.

While the 'gut feelings' of many commenters around here are generally good for laughs when you hold them to the microscope, picking apart these shot charts has really helped showcase the mid-range game a lot of Villanova's players already exhibit. As mentioned, JVP hit 42+% of his mid-range jumpers from near the foul line. While he was truly shitty from nearly all other mid-range areas, this shows he already has the weapon many are saying he 'needs' to develop to jump another level, or make the NBA (not happening, honestly). Arch and Hilliard are also legitimately effective from the mid-range (though Arch takes a much higher volume from there than Hilliard). These damn AAU kids can't hit mid-rangers, though.

The real point is, JVP's main skill is drawing those fouls and taking it to the basket on a team that really, truly needed it. He provides a skill that most of Villanova's players simply don't have - effective, high volume attacking of the rim and paint areas. It's a skill most of Villanova's other wing players lack (let's be honest, he's about the same size as them) - though Hilliard and Hart are notable exceptions. He draws fouls at a superhuman rate, and mainly sticks to his areas of strength - not a bad trait to have. This black hole fills a vacuum in Villanova's shot chart - and he does it really well.

It feels strange to write positive things on JVP, so I'm gonna have to toss it to you on that note.

You did a great job of fleshing out all relevant statistics, so I'm going to simply build off of/reference your points and dive a little deeper into JVP's game.

There is no arguing that JVP finds ways to get his shots. Now, it is simply a matter of making them, and learning to deal with longer, quicker defenders.

There's no denying the contributions of JVP in the parts of the stat columns that get focused on the most. He averaged 14.1 ppg this season, as well as 6.1 rebounds a game. You did a good job of pointing out his value in getting to the line. He has a very typical inner-city NY basketball game: he picks his spots, knows how to get to the rim, and uses his body to his advantage. JVP has also done a great job of breaking out of the thug stereotype that was forced on him after his awesome 1-2 punch of Sig Ep's 'finest.' Several times this season he was the level-head on the floor in volatile times; he even held back JW more than once. Pinkston has turned out to be one of the most prolific scorers in Villanova history, as seen in Mike J's recent article. He has a very good chance of finishing as a top ten all-time scorer at one of the most storied programs in the country. However, the purpose of these charts is to explore a player's EFFICIENCY on the court, and assume a direct correlation between said efficiency and value. So even though JVP certainly passes the on-court eye test and oftentimes fills up the stat sheet, his game does not translate well to the metrics we have laid out. This is not to say JVP isn't a valued member of Villanova Basketball. There's no questioning he has done, and will continue to do, great things for the program. But when his value is boiled down to the most empirical stats (which allows for the most objective truths), it fails our very own 'I-test.'

I think the lengths you had to go to in order to prove the 'worth' of JVP prove my points for me. Take a long look at this shot chart and tell me it's efficient. The only above average places in terms of efficiency are beyond the arc, where the sample size (19) is so small that it doesn't even count. I think the biggest mistake people make is labeling JVP taking shots in places other players on the team avoided as 'effective.' Just because JVP laid claim to these spots does NOT mean he did so successfully. He was below averages in regions 2 and 4, which are supposed to be his positions of dominance! There is no doubting that Pinkston took shots in places where we needed him to. But when he is making them at slightly above average or below clips, that is not an MVP. That's a JVP. When the best thing JVP does is draw fouls at the 93rd best rate in the country; forgive me for not jumping out of my seat. Hilliard is shot chart virtual porn, JVP is a dusty old Playboy. JVP has the ability to get his shots at an elite level in these regions. Now he just has to start making them at an elite level.

I think your most telling bullet point was the first one. As you stated in a previous article, both the offense AND defense performed its worst with lineups involving JVP, in terms of points per possession. Whereas Hilliard is the Villanova prototype, JVP is essentially the Villanovan ésxatotype. He plays outside of the team offensively, and while he has most definitely worked on his defense, it still disappears at times. Villanova is all about efficiency and spreading the ball. A quick glance at JVP's chart shows for the most part he is most definitely not efficient, and acts like a black hole on offense at times. Too many possessions end down low with a bad shot, or worse, a turnover. His work around the rim definitely is something Nova needs, but that doesn't mean he did it well. He simply did it.

What I found most interesting about your email (besides the fact it substantiated every low-value claim I have made for the past 2+ years) was the link to 82games.com. This isn't a veiled advertisement for them, even though it's an awesome site. I think part of the reason people think JVP has an NBA-capable game is because he plays like he is in the NBA already. His tendency to isolate, his (at-times) questionable defense, and the places on the floor he frequents are all qualities of The League. Unfortunately, he doesn't have the athleticism, size, length, agility, speed, or shooting ability for his style to get any chance to exist there. But he will certainly bring an NBA-type game to Europe and make plenty of money bruising weaker, smaller players like he does against the likes of Butler.

My main concession to your email is JVP's ability to get to the free throw line. He often prematurely ends possessions by putting his head down, bodying a defender, and hoping to draw a foul (only to whiff against well-coached big man who stepped to the side). However, when his defender falls for this maneuver (which happens a good deal of the time), his upper body strength allows him to get up a decent shot, and sometimes finish for an AND1. While it looks ugly when he fails, when he doesn't, he at least gets to the line and scores points when nothing else seems to be working for the offense. I consider this his most valuable addition to our offense: scoring when the offensive flow escapes the team. It seems like JW has figured this out the past couple of years, and goes to him in times of absolute necessity. Villanova looks ugly offensively when they lose their fluidity, and a player like JVP can provide the stop-gap they desperately need.

There is no arguing that JVP finds ways to get his shots. Now, it is simply a matter of making them, and learning to deal with longer, quicker defenders. Syracuse exposes him every year for this exact reason, and we just don't have anyone on the team to give him valuable in-season practice. I'm hoping JW brings in a Dante Cunningham-type (in terms of body, not assault history) to give JVP the experience he needs in these situations. Pinkston is going to get his minutes and shots, so now it is just a matter of maximizing them, while maintaining the form of the offense. It's easy to throw stones from the ivory tower of fandom, but I truly hope he continues to improve in all of these areas so that he can approach the high ceiling we so prematurely placed over him. There is no doubting JVP's place in Villanova basketball lore. I just hope he can work on the holes in his game and earn legendary status.