As most of you are aware, The Mary Kline Classic is a basketball tournament set up by Alex Kline to raise money for cancer awareness. Alex gave an emotional speech before the festivities on how his mom passed away after a 5 year battle, when he was just 10 years old, This was the 4th annual Mary Kline Classic and the money they have raised has continued to increase year after year. This year they received donations of $31,000, $7,000 more than they raised all of last year. All in all, this is a great event for a great cause.

Now onto the game: Key Notes

The first game was a matchup between the under classman. This featured multiple Nova targets including Trey Lowe, Rawle Alkins, Payton Prichard, Chris Silva, Tyus Battle, and Derrick Jones.

Trey Lowe didn't have his best night. He hit a couple of 3's, but not much else. He seemed to hang around the 3-point line and didn’t move around too much without the basketball. He didn't try to create so it’s hard to tell if he has the ability to do so. A lot of speculation has been going around that Trey is a favorite to come to Villanova because of his close relationship with 2015 commit Donte Divincenzo.

2016 SG Rawle Alkins was, to me, the second most impressive player on the floor behind Derrick Jones in this game. Alkins holds an offer from Villanova, as well as Seton Hall, Minnesota and Cincinnati. Alkins gets to the lane with ease. On multiple occasions he blew by his defender and got fouled going up for a slam. He couldn't convert the dunk attempt but went to the charity stripe and knocked down his free throws. He also had a nice floater in the lane off a pick and roll. Alkins also knocked down a couple of 3's and he just looks like he has the whole package. Alkins’ stock has not blown up YET, but expect it to rise in the next couple of months. He is a special talent.

2016 G Payton Prichard unofficially visited Villanova for the second time yesterday. It was a perfect time for Payton to get on campus since the Mary Kline Classic was only an hour and a half away. He tweeted,

Had a great time up at Villanova today! #NovaNation now headed up to New Jersey to play in the Mary Kline Classic!!! #

Pritchard finished the game with 6 points on 2/6 shooting. He dished out 5 assists while turning it over 3 times. He showed off a good handle and the ability to run an offense, and find open guys. He does, however, need to bulk up, as he was physically outmatched all night. Pritchard did compete in the 3-point contest, and finished in 2nd place. So at least that shows you he is a very good shooter and can knock down shots.

Chris Silva crashed the offensive and defensive glass very well. He also ran the floor and got himself in a position to get the ball by attacking the rim. Silva told a source that Villanova, Seton Hall, and Syracuse are recruiting him the hardest.

Jay Wright and Villanova have been recruiting 2016 SG Tyus Batle since he was in 8th grade. The 5-start Battle is ranked in the Top 15 in the class of 2016. He displayed why he is rated so high on Saturday. At 6’ 5" he is very long and athletic, and has the ability to create his own shot. He was also able to finish through contact, especially in transition. Battle finished the game with 20 points. He has set up a visit to come see Villanova for the 3rd time on June 8th. Battle looks like he is the Number 1 target for Villanova.

2015 F Derrick Jones, (Philadelphia, PA) was unarguably the best player on the floor Saturday night in the underclassmen game. He had multiple highlight reel plays. I counted five put-back slams off of missed jumpshots. He was also able to create, knocking down mid-range jump shots off the dribble. Jones finished with 31 points and was chosen as the MVP of the game. He holds offers from multiple top colleges, including Villanova. However, all signs point to him leaving the state of Pennsylvania.

The upperclassman game represented two Villanova commits in Phil Booth and Mikal Bridges. Donte Divincenzo would have played in the game, but he sprained his ankle and is out for six weeks.

Phil Booth is a prototypical Villanova guard. He is so smooth and he sets the tempo with his play. You can never speed him up or slow him down. He displayed a great handle and an ability to run an offense. Scouts have stated that Booth isn't that athletic. I think after today's performance they could put that conversation to sleep. Booth found ways to score every way possible against some of the most athletic players in his class. He drove the lane, pulled up for mid-range jump shots, and even knocked down a couple of triples. The rotation on his shot is just beautiful.

Booth wound up finishing the game with 21 points and 7 assists. After the buzzer sounded, Booth got rewarded for his great play on the hardwood. Alex Kline called him out to center court and announced that he had jointly won the MVP of the upper classmen game along with Ja'Quan Newton. 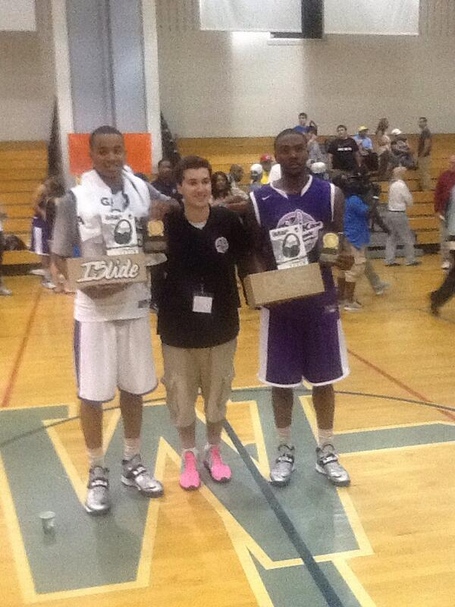 On the other hand, Mikal Bridges didn't have his best game. He finished with just five points. I felt that he kind of took a back seat to the other talented players on the court with him. He didn't really assert himself as much as I thought he should have. He knocked down a 3, and made an easy layup off of a drive and a nice pass from Phil Booth.

I think that both of these players have the ability to bring a National Championship back to the main line. The future is bright NovaNation.