Louis Herman Klotz wasn't an NCAA Tournament star at Villanova, but his career on the hardwood was one of legend.

Attending Villanova in the 1940s, Red Klotz was a native Philadelphian and a lover of basketball. The 5-7 guard spent two seasons as a Wildcat before shipping out to serve his country in World War II. Afterward, he won a professional championship and played in more than 14,000 games, Barnstorming with the Washington Generals.

He died on Saturday at age 93, in Margate, N.J. from cancer.

He was a reserve player on the 1948 Baltimore Bullets team that won the Basketball Association of America championship (an NBA precursor), but that was his only season with the Bullets. He played in 11 games that season, scoring 15 points, and played in six playoff games, scoring a total of six points.

After the Bullets, Klotz joined the Philadelphia Sphas (a name derived from the South Philadelphia Hebrew Association), who competed in the ABL. Klotz first faced the Harlem Globetrotters as a member of the Sphas, defeating them. As his career progressed, he eventually coached and managed the Sphas as well.

The Legend of Red Klotz 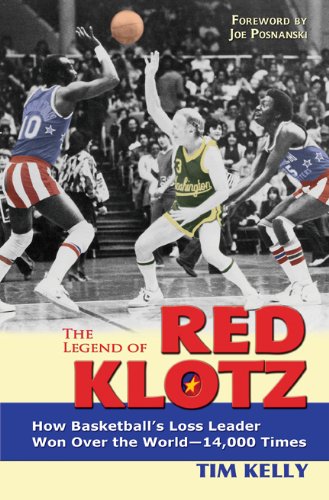 The Legend of Red Klotz: How Basketball s Loss Leader Won Over the World 14,000 Times

In 1953, after travelling with the all-star teams that accompanied the Globetrotters on international tours, the Harlem owner asked Klotz to put a team together to travel with the Globetrotters regularly -- that team was named the Washington Generals after Dwight Eisenhower.

The Generals traveled with and played-against the Globetrotters from 1953 until 1995, winning just two games in that span -- and Klotz played point guard for the team until he was 68 years old. The Generals, going by the name "New Jersey Reds," last defeated the Globetrotters in 1971, when Klotz hit a game-winning set shot (at age 50), with just 3 seconds left. Meadowlark Lemon's buzzer-beater attempt rimmed-out to give the Generals a 100-99 victory.

"Beating the Globetrotters," he told Ben Green for the book "Spinning the Globe," "is like shooting Santa Claus."

The Generals were "disbanded" in 1995, when Klotz formed the New York Nationals in order to attempt to "change their luck," but that team only lasted until 2007, when the Generals name was revived.

Klotz's teams have always been a separate organization from the Globetrotters and he had claimed that they always tried to win every game -- and were never asked to lose by the headliners. The Generals did put up with the Globetrotter's pranks, however, having their pants pulled down, basketballs being wedged into their jerseys and other goof-offs designed to make the audience laugh.

"I tell my players that our first priority is always the laughter," Klotz told Sports Illustrated in 1995. "We're the straight men. Laurel had Hardy, Lewis had Martin, Costello had Abbott, and the Trotters have us."

Klotz was inducted into the Harlem Globetrotters' Legends Ring (their version of a Hall of Fame) in 2007 -- and is the only non-Trotter who has been recognized in the ring. He also had his number-3 jersey raised into the rafters of the Wells Fargo Center when the Trotters played there in 2009. He has also been inducted into the Philadelphia Jewish Sports Hall of Fame in 2001, and was the recipient of the 2009 Philadelphia Sportswriter's Association "Living Legend" award.

He is survived by his wife Gloria, his six kids, 12 grandchildren and nine great-grandchildren. The Washington Generals will continue on under the stewardship of the Klotz family.