Surprise starters, position changes...this depth chart has it all.

Villanova has released their two-deep depth chart prior to Friday night's trip to face the Syracuse Orange, and there should be plenty to talk about in advance of the 7:30pm ET kickoff. Here's the depth chart via a release from the Athletic Department. 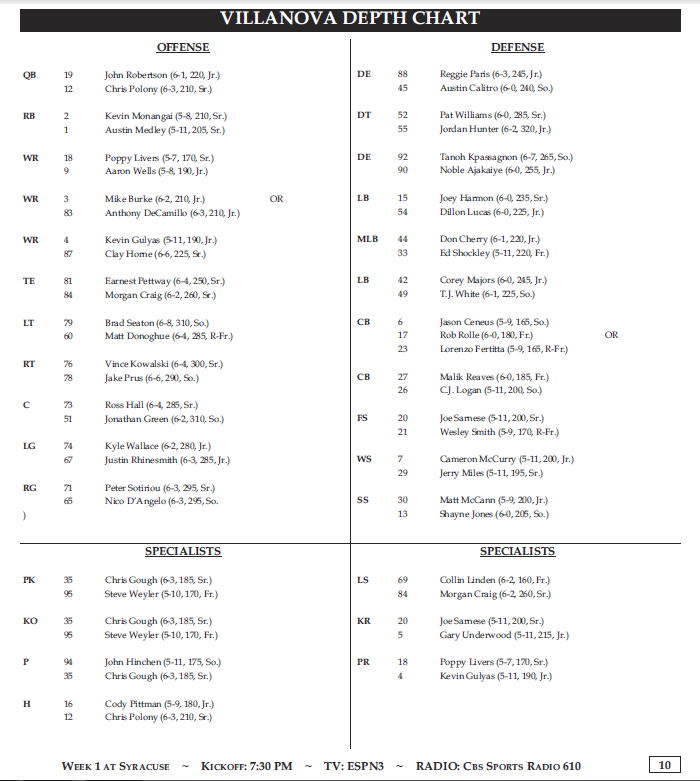 Only a few surprises on the offensive side of the ball to call out. First, Mike Burke and Anthony DeCamillo look to be in a dead heat entering the season. Burke, a notoriously good run-blocker, might give way to DeCamillo on obvious passing downs at the outset. Clay Horne not being able to win a starting job is a bit of a surprise, although not so much when you see that he's competing with Kevin Gulyas.

On the offensive line, we expected Nico D'Angelo to beat out Peter Sotiriou based on his Most Improved Player performance during spring practice, but Sotiriou boasts game experience that should bear more immediate dividends for the offense.

On defense, there are a couple of big surprises at the cornerback position. It was a safe bet that true freshman Malik Reaves was going to be a big-time player on the Main Line, but we didn't expect it to happen this quickly. He beat out C.J. Logan for a starting spot, so it will be baptism by fire at the Carrier Dome. On the other side, true freshman Rob Rolle is in a battle with Lorenzo Fertitta for the backup job to Jason Ceneus. So it's not a reach to suggest that Rolle and Reaves have really impressed during fall camp.

Austin Calitro has moved from LB to DE and will back up Reggie Paris. With all the talent at LB, this may have been a quicker way to the field for the Connecticut native. With Calitro vacating the LB corps, true freshmen Ed Shockley is slated to back up Don Cherry at MLB, while Wesley Smith has recovered from last season's knee injury to stake his claim as the backup to Joe Sarnese at free safety.

Not much to talk about on special teams. Chris Gough won the placekicking job as expected and will continue to handle kickoffs, while John Hinchen will handle punting duties. Freshman Collin Linden took the long-snapper role away from Morgan Craig. Poppy Livers will continue to handle punt returns while Sarnese and Gary Underwood will handle the kick returning duties in a slight change from previous seasons. Expect that to be fluid as the season progresses.