Taking a look at the shot chart of the man who killed Villanova's season, and how he can expect to do in the NBA.

The lasting image (unless you managed to erase the occasion, courtesy of alcohol, Lacuna1, or a concussion resulting from a physical altercation with UConn fans) of Shabazz Napier for most Villanova fans will be him, more or less, single-handedly taking us out of the NCAA tournament.  After watching ‘Nova close the gap - in a decidedly ugly offensive game, for both sides - to 45-40 with 10 minutes remaining, Shabazz took over, draining three consecutive 3-pointers while scoring 11 of UConn's next 15 points to stretch the lead to 9 points with just over 2 minutes remaining.  UConn managed to predictably (and easily) close out the game from there, never letting Villanova within 7 points the rest of the short way.

While I was sobbing on the couch for much of the next 3 weeks, Shabazz soldiered on, shouldering the lion's share of ballhandling, creative, and scoring duties for the eventual national champion Huskies.  While, in this writer's humble opinion, not quite as singular as Kemba Walker's recent push to the NC, it's probably as close a run as we'll get for some time2.  Shabazz was the offensive engine for a UConn team semi-secretly built on its solid defense - one creative, Cassell-balls-sporting combo guard, surrounded by Boatright (guard!), Daniels (wing!) and an army of 3 point shooters / dunkive + defensive specialist tall guys.

While all VUHoopsters know you can't possibly win a national championship like that, UConn did.  And while Napier was leading his teammates to a national title, his NBA fate was ultimately sealed by a man who will probably never be his teammate. LeBron James, mentioned in the news lately as the man unfollowed by Shabazz Napier's Twitter account, tweeted this during the NCAA tournament: ‘No way u take another PG in the lottery before Napier.'3 Pat Riley (multi-time NBA champion coach, GM/president/godfather of the Miami Heat) took this social media directive to heart while scrambling to placate the free-agent-y best player in the world, and traded up to select Shabazz with the 24th overall pick in the 2014 NBA draft.  However, this move - among several other minor maneuvers - was not quite enough to assure James of the Heat's championship viability, and he bolted for the GM job in his hometown of Cleveland. 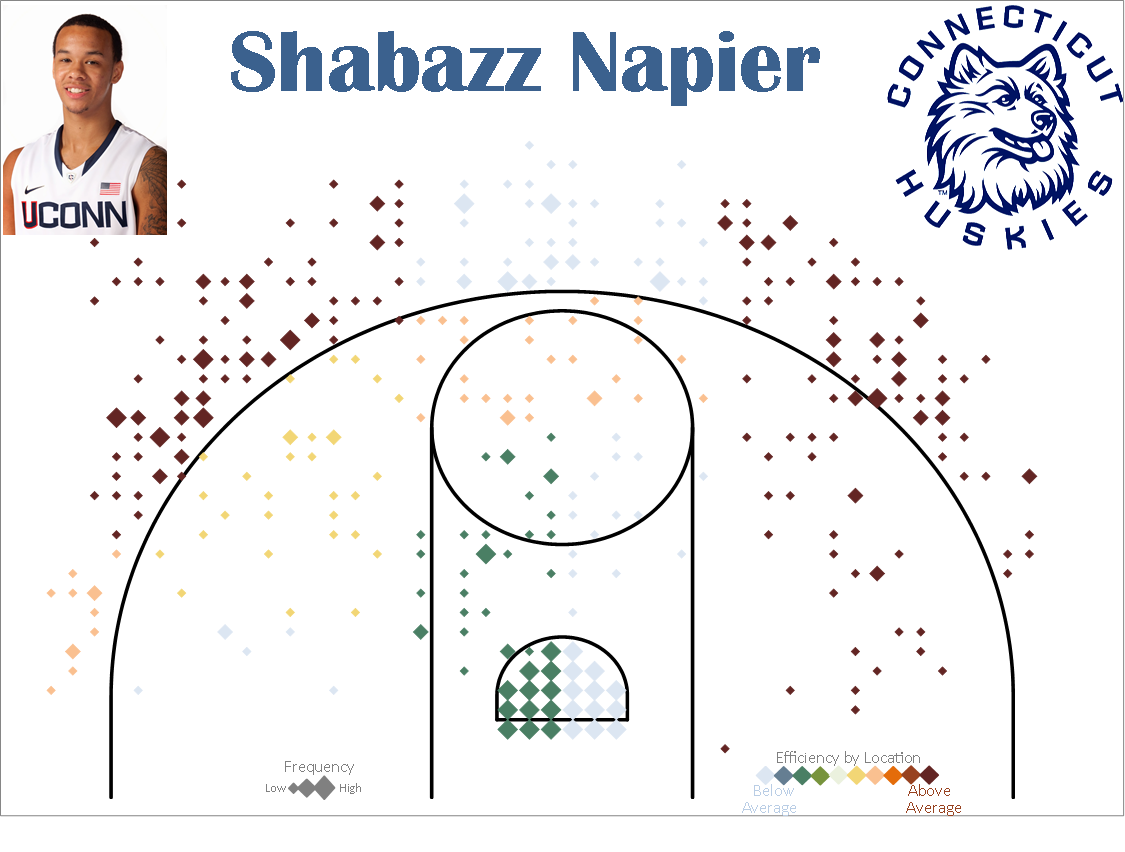 In the end, for this section, I'm going to spend a lot of time discussing how I believe he'll fit in with his NBA team, but let's carve out this quick section for a pure discussion of his shot chart.

Napier was an incredibly versatile scorer for a 6 foot nothing combo guard, as you can see by his splits from the rim, mid-range, and 3-point land.  Those attempts don't factor in his free throw rate (48.0%, 410th best in the country - which he knocked down at an 87% rate) and fouls drawn/40 minutes (5.4 per), both in elite territory.  Basically, if you needed some points last year, and Doug McDermott was occupied4, you wanted the ball in Shabazz's hands.  While not the greatest finisher at the rim - and his average size and hops certainly contributed to his difficulties scoring in the restricted zone - the free throws (and 118 field goal attempt) point toward his commitment to getting there.  And, when he couldn't quite make it to the rim or the line, he could fall back on an elite jump-shooting game - he shot better than 40% overall from the field, and topped that number from a majority of his spots.  He even managed to hit better than 40% from 2 point jumper range, typically a dead zone for basketball shots, and a rate that tops out as above-average even in the NBA from the same spots.

He combined all this with an underrated playmaking hand, assisting on over 30% of his teammates' baskets while he was on the floor - 63rd best in the country.  He handled an incredible burden, creating and distributing while playing the most minutes on the team (87.2% of his team's overall minutes;  28% usage rating, 115.8 offensive rating).  He handled it all efficiently and effectively, really growing into himself as the season (and the NCAA tournament) wore on.

All that said, the same incredibly high usage rate, assist rate, and % of shots taken point to an overly heavy helping of hero ball. It was occasionally noticeable while playing - he actually had an extended slump leading up to the NCAA tournament, recording a ton of shots but just not hitting all that many (he obviously recovered, but he also never stopped shooting).  Those kind of instincts can occasionally hurt a team. The again-always-utile hoop-math.com provides statistics on ‘late offense,' or offensive statistics recorded 30 or more seconds after the start of a possession - Shabazz attempted 76 such shots last year, and hit just 25 of them (less than 33%).  While a certain amount of this can certainly be blamed on what the Huskies asked him to do - initiate  and run the offense, while taking most of the shots - that's an incredibly inefficient use of possessions, that often terminated in 2 point jumpers or contested 3s (67 of those 76 shots were from range).  Especially in the NBA, with a shorter shot clock (and much better players around him), he'll have to learn to curb those instincts. 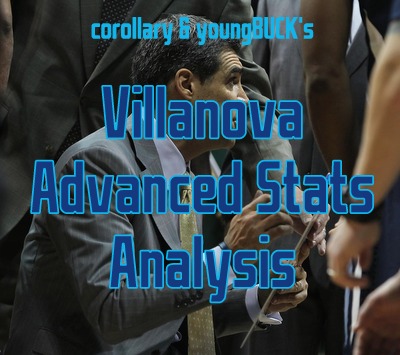 Ultimately, I think the departure of James will have a positive effect on Napier's chances in the league.  I believe Shabazz would have struggled to mesh his game with the style the Heat played while James was there.  On defense, the Heat thrived on a swarming, pick-and-roll trapping defensive scheme predicated on overloading the main action of a play - at the NBA level, almost always a pick and roll.  By sending two defenders to ‘trap' the ballhandler in the action far from the basket, the Heat hoped to force pinpoint ball movement through an avenue of wingspans and incredible athletes to yield open looks for fourth and fifth options - options that, again, would have some of the best athletes in the world leaping out to close their airspace down.  Though the style was dangerous - the Heat often ranked toward the bottom of the league in 3s allowed and the percentage at which they were converted - the rewards reaped in turnovers and easy transition baskets often outweighed the dangers.  It amounted to a bet:  you may get a few of those open looks, but our athletes will beat your offense over the full 48.

Napier is an average-at-best athlete (for the NBA).  Even in college, he sometimes struggled with on-ball defense5, lacking adequate lateral agility and getting blown by too much and too easily.  While rather adept at picking pockets, he simply would not have been able to provide the athleticism needed to play the point man in the Heat's scheme, and close out effectively on open shooters (due to his lack of height).  With James gone and Dwayne Wade's knees perpetually recovering from the night before, it's unlikely Erik Spoelstra will continue this brand of defense.  It's something they had already been dialing back on, as it requires tremendous amounts of energy and seamless help defense - the odds say that the Heat will play a much more traditional style of defense this upcoming year.

While Shabazz has clear limitations, even in a traditional defensive scheme, his responsibility while he's on the floor, in terms of learning help defense and playing adequate D on whoever they hide him on, will be far less in a traditional scheme.  This will allow him to (generally) focus on the stronger side of his game - the offense.

His offensive game will certainly be more suited to a more traditional pick and roll based offense, rather than what the Heat were running last year.  Had LeBron remained, Shabazz would have been asked to surrender ball-handling duties to the world's best player/passer quite often, with other touches going to Dwayne Wade.  Such a ball-dominant player in college, Napier may have struggled spotting up on the perimeter around these guys - his percentage of assisted 3s (41.4%) was the absolute lowest in college basketball, on a really high number of attempts.  In case you're having difficult translating that stat, it means he took almost 60% of his 3's off the dribble - a crazy high rate.  He simply wasn't asked to catch and shoot much, and took a ton of his 3s off the dribble - something that really wouldn't have fit in with the Heat's ‘surround-LeBron's-post/passing-game-with-3-point-shooting' philosophy.  That's not to say he couldn't have learned it (he shot 41% from 3, and 87% on his FTs last year, after all), but it would have been a big adjustment.

Presuming Napier is the starting point guard, he'll have an excellent big to partner with on the pick-and-roll:  Chris Bosh, one of the best-shooting big men in the league.  Last year (and pretty consistently, for much of his career), Bosh shot 48% from the mid-range, good for 2nd in the league.  Guys that can shoot that well from those areas obliterate the rules ‘against' long 2s, for several reasons - shots that go in that much are worth taking, even at a 2 point value, and they must be defended, triggering a number of goodies not always available to a typical NBA offense lacking that type of spacing.  Big men can't stray far from Bosh on the pick-and-roll, as he'll burn them from 20 feet (and he even become a semi-respectable 3 point shooter last year) - so they stick closer in general and on actions, opening up driving and passing lanes for the ball-handler.  And, as Napier is such a deadly/experienced pull-up 3 point shooter (though he hasn't done it in the League, and there's always a difference), his cover won't be able to easily go under the screen/pick, as it would simply invite Napier to shoot.  Bosh is still dangerous enough putting the ball on the ground, adding yet another wrinkle the defense must worry about when closing back out to him.  The probable reversal to a typical NBA offense will most likely benefit Napier - but it's difficult to tell with any certainty how much he will play, and with the first or second team.

The Heat already have two incumbent point guards, in Norris Cole and Mario Chalmers - despite Chalmers' much maligned recent performance in the NBA Finals, he'll likely benefit from having played in the league for several years, as well as his familiarity with most of the personnel the Heat brought back for next year.  Cole, a defensive specialist with an iffy jump shot, likely won't feel much competition from Napier for his minutes, as his strengths are typically Napier's weaknesses.  I'm not all that optimistic Shabazz will get a chance for big minutes, or that he'd do all that much with them in his first year against better competition (he's averaged under 28% shooting in his aggregate performance in the summer league this year, for those who care/think it matters).  He's old (for a rookie), not that athletic (for the NBA), and will really need to become an elite NBA jump shooter to stick.6 He managed the trick in college - let's see if he does in the League.

2. yB note: Is it worth mentioning that both of UCONN's wins came in extremely weak seasons?

3. yB note: MAYBE, just maybe, LeBron was speaking more as a fan than a GM? Good ole Twitter. Whatever, anything to stick it to Riles.

4. yB note: He's probably still at Comcast with Wragge swishing half court shots to impress local coeds. That game will forever haunt me.

5. yB note: Doesn't that make him better suited for the NBA?

6. yB note: He strikes me as a basketball addict that will do whatever it takes to earn a career in the league. But so have several other players that flamed out by year three.