The latest FCS Top 25 from The Sports Network has been released, and despite a loss to Syracuse on Friday night, the Villanova Wildcats have risen two spots in to the Top 10. The jump also means they have surpassed Fordham, who they host in the home opener at Villanova Stadium on Saturday at 3:30pm ET.

At the top, North Dakota State reclaimed their rightful position after demolishing Big 12 members Iowa State over the weekend. The Bison have now won a nation-leading 25 straight games, and the past three national championships.

The CAA was well represented again, though New Hampshire, William & Mary and Towson dropped two spots each with losses to Toledo, Virginia Tech, and Central Connecticut State, respectively. On the bright side, Richmond jumped three spots after blowing out Morehead State, while Maine rose one spot after a tough-fought win over Norfolk State.

Villanova shot up in the FCS Coaches Poll, which is administered by the Southern Conference this week. From 13th in preseason polling, the Wildcats are now the number-seven team according to the coaches. The coaches poll remained steady in the top-3 spots this week, with Coastal Carolina moving up from sixth to fourth and McNeese State suprisingly rising to sixth without playing a game.

Fordham, who are up next for the 'Cats, also rose on the strength of their victory over St. Francis (PA) over the weekend. The Rams are now ranked 10th in the coaches' poll. 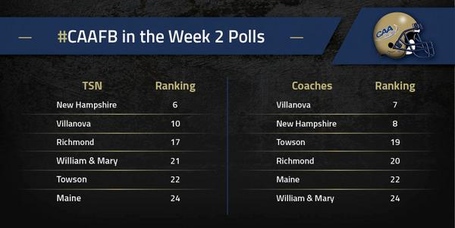