The stage was set. A mid-afternoon game in an in-season Tournament Championship, against an ACC squad, in New York City. Everything was primed for an exquisitely dressed Jay Wright, and he did not disappoint.

As he watched his team slowly and methodically defeat the Georgia Tech Yellow Jackets, 69-52, in the Championship of the 2015 NIT Season Tipoff the Villanova head coach commanded the sidelines of the Barclays Center in elegance.

The suit wasn't new, but Wright wore a two piece gray look that featured stark-white chalkstriping (he's worn this before as a three-piece, most recently against Providence in the Big East Tournament). Underneath, he donned a pure white shirt and a gray tie that contained an inlaid geometric design.

He finished off the look with a white pocket square and the same indistinguishable lapel pin from the previous game.

Editors' Note: Please note the varying shades of gray this suit looks below based on the photographers' lens setting. In the top image by Vincent Carchietta (USA TODAY Sports), the photographer shot the image at 1/1600s with a f/stop of 2.8 and an ISO of 2500. The bottom image by Mike Stobe (Getty Images) is using a shutter speed of 1/1000 of a second with an f3.2 aperture at the same ISO. #PhotographyLesson 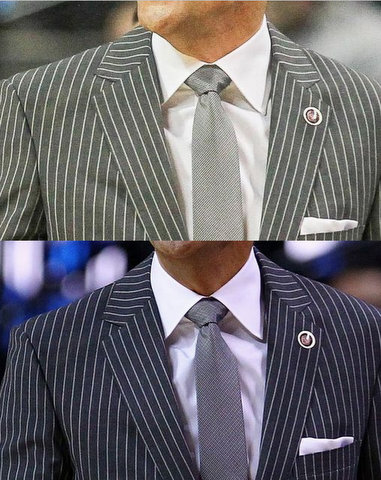