With a sub-500, two-conference-win Marquette squad on the schedule that required the University to offer a Buy One, Get One ticket offer to the game on top of Dollar Hot Dogs to up attendance, it would have been easy for Jay Wright to take the game lightly.

Maybe it was the lure of playing in an NBA arena, 'Nova going for its 20th win of the season, or simply rebounding from his worst sartorial decision ever, but Jay Wright's style did not rest for the game.

For the third time in the 2014-15 season the Villanova Head Coach donned a three-piece suit like he did against NJIT and Georgetown.

Wright commanded the sidelines of the Wells Fargo Center debuting a [new to #SuitWatch] navy blue suit highlighted by lavender pinstripes. The jacket featured two buttons, of course, and a third ticket pocket. Underneath the jacket and vest the Villanova leader sported a demure lavender shirt and a new fuchsia geometric tie. Under close examination, an eagle-eye can notice Gabe D'Anunnzio's fine tailoring skills and detailing with a purple gingham under-collar.

He finished off the outfit with a burgundy pocket square and a Fox Sports lapel microphone.

Red stripe on each vest shoulder RT @VUhoops: Jay Wright is wearing a three-piece suit for the third time this season. #SuitWatch #Analysis 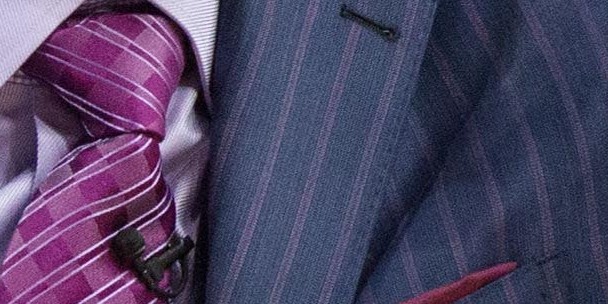 4.25/5 Esquires: Wright rebounds from the worst look in the History of #SuitWatch to one of the best. The editors are not a fan of the lavender pinstripes but admire the detailing and cohesiveness of the entire look.