You've seen this before...

The outright 2015 Big East Regular Season Championship was in their hands. And it was Nebraska. The players weren't on their A Game on Tuesday as it took the entire 40 minutes for #4 Villanova to defeat Creighton, but Jay Wright's Suit game was.

For the sidelines of CenturyLink Arena, the Wildcats' Head Coach pulled out one of his best looks of the season; one that avid #SuitWatch followers have seen before- twice.

The Good: Wright donned a three-piece charcoal suit with pinstripes. The addition of the wood-grained hardware gave the perfectly-tailored suit a ... je ne sais quoi... sartorial elegance, without being over the top. Underneath, he matched the suit with a light-purple broadcloth striped shirt and a purple paisley tie.

The Bad: This suit has bad ju-ju. Plain and Simple. In its previous two appearances the Wildcats lost at the Carrier Dome and at Georgetown in January. 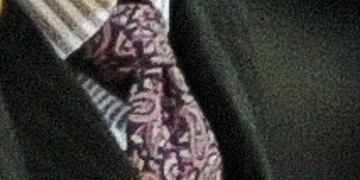 3/5 Esquires: Re-read the aforementioned Good & Bad. This is a 4.5 look. But in concert with its result set, its rating is dropped... majorly.