The VUHoops Crowd again was confident in this one, picking the Cats by 11. Vegas was a tad more so, favoring the Cat's by 12.5. Only BosshogHazzard and Poker Chris anticipated the quantum of this blowout. When the final horn sounded, the Cats had taken this handily, and the Benchmob saw significant time highlighted by Henry Lowe’s three pointer on the final scoring play. Regarding the contest, 61 players teed off. Of those, none drove the ball out of bounds, demonstrating the impact past remedial sessions for some at the BosshogHazzard Skills Academy. Six players found the green, but it was an enormous one and most were looking at four-puts. John-Knee V was the closest to the pin, if you can call it that. The good drpainosaurus did not score with his baseball prediction of 4-0, but hung on to win the twelve-game contest with 13 points, taking the $50 gift certificate prize. NovaKG, John-Knee V and Nova Dave earn honorable mention. We raised $610.00 in this game and $1,702.50 overall for Villanova Men's Basketball and NovaDave's Wawa Arena at Villanova.

Share All sharing options for: Closest to the Pin Grand Finale - St. John's

RESULTS: With the Cats dominating win over St. John’s, 105 - 68, we congratulate six VUHoops readers who scored in this round and drpainosaurus who won the contest.

The final leader board is provided below.

VUHOOPS vs. VEGAS: Based on the average predicted scores of the VUHoops Crowd and the posted Vegas line, we would have had a SPLIT by taking ST. JOHN’S getting 12.5 points (LOSS) and betting the OVER (WIN). Over the twelve rounds of the contest, we would be EVEN MONEY.

UPDATE (March 7, Tip-Off) ... Recapped below is the way the VUHoops Crowd sees this one so far: 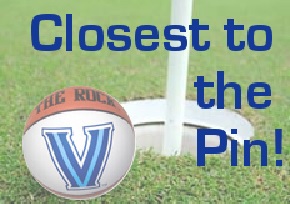 The window is now open for you to post your predicted final score for Tuesday's game vs. St John's. The official contest rules are posted HERE.

Going into this round, drpainosaurus is in the lead with 13 points. The full Leader Board is posted HERE.

Don't forget that you support Villanova Men's Basketball by playing Closest to the Pin.

For the final home game of the season...

... a contribution of $10 will be made to Villanova Men's Basketball and Nova Dave's Wawa Arena at Villanova for each score posted in this game up to a maximum of $2,000 (i.e., 200 posted scores).