Reader Submission: A night inside the Wildcat

VU Hoops has unmasked the Wildcat -- sort of.

Share All sharing options for: Reader Submission: A night inside the Wildcat 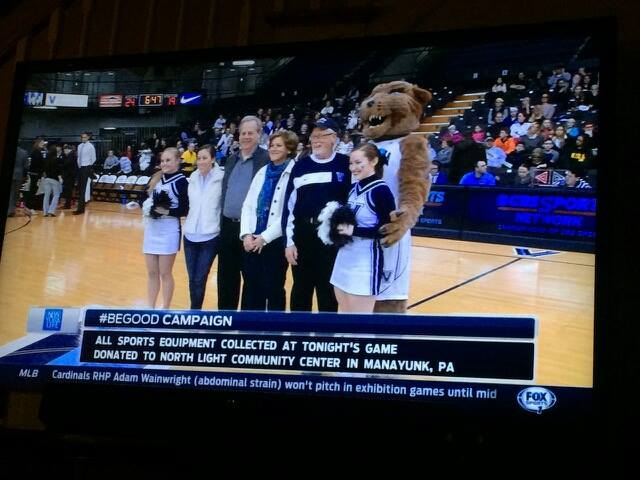 I've met "the Wildcat." When I was in school, I did shots of Southern Comfort with the student who wore the suit at the time, and a few years after college ended, I met another Wildcat from an earlier era (circa 1970s) at a bar in Atlanta. There have been countless men and women inside the Wildcat suit since the University sadly opted to retire Count Villan.

This story is a little different, though. Submitted by reader Nova76, this story is about the man inside the furry suit, but not its usual wearer.

My first day at Villanova was in August 1972. Only a few short months following a Howard Porter led team that lost to powerhouse UCLA in the NCAA finals... Jack Kraft's last year on the Main Line... My second year was Rollie's first... This grad has bled "Nova Blue" ever since...

So, when Villanova's Annual Athletic Fund auction came around again this year, I pounced (pun intended) at the opportunity to be Wil D Cat at the Women's game vs. Providence on February 27th.

Be it known that children, students and parents (and cameras) gravitate to The Cat!!! But make no mistake, the suit is a self-contained sauna!

Believe me, you have to be in pretty good shape to do something like this! Starting out in only gym shorts and T-Shirt (Nova Nation of course), I then don first a chest protector (to beef up that chest), the heavy fur-suit and basketball uniform number-six (unassigned on the court, as no college player is permitted to wear any number containing the digits 6, 7, 8 or 9).

The head is heavy and enormous (even for my inflated ego) and comes with a chin strap. Visibility is through a fish-net like grid thru the mouth and severely limited (comparable to walking around with your chin on your chest). Then come the enormous back paws (enlarged slipper-like that feel 3 times the length of your own feet). And then you hear from the student that's been helping you into this thing: "Now, go out there and have fun!!!"

I did! Be it known that I came away with a new appreciation and respect for the students that climb in to this thing... And I am grateful for 2 things: 1) that I had the chance to do this and 2) that I never have to do it again!

Thanks, Regards and Go Cats!!!