The date had been circled on the calendars of Philadelphia Basketball fans since July when Temple released their out of conference schedule.

A game on ESPN2 for (what would probably be the Philly Big 5 Championship) plus the main storyline of freshman sensation Jalen Brunson, who spurned his father's alma mater for the Main Line, playing for the first time on the Owls' home court. Throw in Villanova's #1 ranking in the nation and the night was big, on a national level.

Ultimately, it was another Business Trip for 'Nova.

The younger Brunson stepped up to the hype, as the Illinois native led 'Nova with 25 points en route to the Wildcats' 16-point victory over the Owls and fourth consecutive 4-0 Big 5 record.

The Villanova head coach took to the court of the Liacouras Center in a deep charcoal two-piece suit highlighted by stark white pinstripes. Underneath, Wright, like his squad, showed versatility and a freshness in style as he paired a simple light blue striped tie with a seemingly plain white shirt. Under deeper inspection, Wright's white shirt, and overall look, was stylistically improved by small pinpoint dots.

No pocket square was worn. 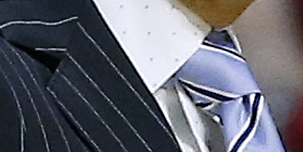 4.25/5 Esquires: The change up in shirt with a contemporary style upgrades Wright's look that could have been downgraded with the way-too-basic tie selection.