The stage was set. A game at the "World's Most Famous Arena" with hardware on the line as the Villanova Wildcats were playing in the BIG EAST Tournament Championship on the main FOX channel.

Although 'Nova didn't come away with the victory, Jay Wright arguably had his best look of the 2015-16 season.

Wright took to the sidelines of the Madison Square Garden court in a two-piece navy blue pinstripe suit. Underneath, for the third consecutive game, he sported a patterned shirt; this time it was light blue with navy micro-dots. He matched that with a navy-based striped tie.

The complete look was accessorized with a silver tie bar, that was appropriately placed between the 3rd and 4th button of his shirt, and a blue & black gingham pocket square. 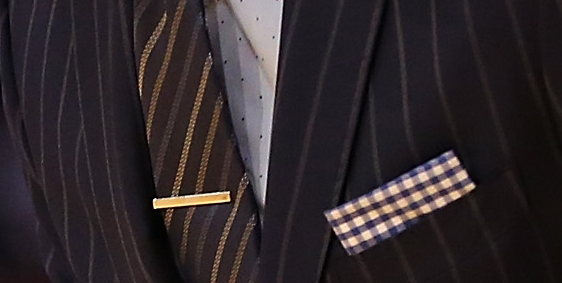 (4.75/5 Esquires) Wright went with another exquisite look for the Tournament Final. He shows versatility in his style with the mix of traditional and trendy. The gingham pocket square adds the perfect variety to the overall look putting it into the upper echelon of Jay Wright looks.  Although a poor outcome for 'Nova, Wright can rest knowing he looked fantastic for this Villanova Business Trip.