Villanova is back in the NCAA Tournament with a high seed and as reporters and opponent fans talk about Nova's recent inability to make the Sweet 16, one thing they do not argue about is the fact that Jay Wright dresses well.

'Nova went to Brooklyn prepared as they easily handled the 15-seed UNC-Asheville Bulldogs in their First Round game; Wright also arrived prepared to show off his great style.

The Villanova head coach commanded the sidelines of the Barclays Center court with a navy blue two piece suit. The double breasted look was very simplistic in its look but expertly tailored. Underneath, Wright went with a french blue shirt (with french cuffs) and a dark blue tie with light blue & white geometric designs.

An NCAA Tournament lapel pin, a tie bar, and a white four-point pocket square look finished off the look. 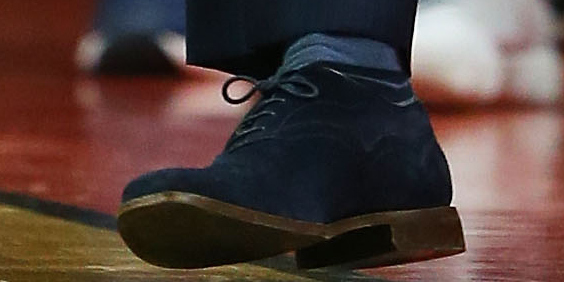 (3.75/5 Esquires) Wright went with a very sterotypical Wall Street look for the trip to Brooklyn. The style was expertly paired but double-breasted??? A solid, but uninspiring look for this Villanova Business Trip.