Seton Hall almost did us a favor. They were so close to finishing Creighton. Even Chris would love New Jerseys for a little bit, however this is Seton Hall. Thus, they could not take advantage of McDermott's late missed free throws and Creighton regained sole possession of first place in the Big East. This is why people hate New Jersey.

Let's take a look at the week ahead.

SENIOR DAY! James Bell, Nick McMahon and Tony Chennault will all be honored. Let's not overlook that this is a game, however. Butler plays close to the very end, with all opponents. An announcer for the Providence-Butler game noted that Kellen Dunham needs a few screens in order to get his shot off, however he never gets that and thus he works too hard for every shot. Thus, he gets winded near the end of games. If Villanova pressures him, Butler will not squeeze out a late run.

This game will be at the Wells Fargo Center however it is the beginning of Spring Break and thus not many students will attend. Marquette has a front court that is strong like St. John's, and we saw them give Nova trouble twice. Marquette was not an easy win the first time too; OT was needed after Tony Chennault was called for a charge to end regulation. The Wildcats need James Bell to not play paint defense and to have Daniel Ochefu and JayVaughn Pinkston rough up Davante Gardner.

Xavier is coming off a bad 22-point loss at Georgetown in which they were outrebounded 26-21 which is so depressingly low. Creighton ranks lower than Xavier in RPG, but almost 10 PPG higher. Creighton needs to make this more a "made FG" battle instead of a rebound battle, which they should have no problem doing.

Again, rebounding battle. Now that Chris Obekpa has completed his #TheReturn (sorry Derrick Rose) St. John's is back at full force. Xavier is also 2-5 on the road so this doesn't bode well for the Musketeers. Obekpa vs. Matt Stainbrook, Semaj Christon vs. D`Angelo Harrison. Start your engines.

Both Creighton and Xavier rank 5th and 29th in the country in FG%, respectively. They rank 143rd and 86th in rebounds, respectively. Xavier needs to make this a rebounding game, not a made FG battle. Basically, the opposite of what I just said under CREIGHTON.

Marquette Golden Eagles (coming in 4th out of nowhere)

Marquette needed overtime to beat DePaul so I'm a little skeptical of them, however they still have firepower in the front court. In that DePaul game, Chris Otule finally put up big numbers in 12 points and 4 rebounds on 6-7 shooting. Mix him, Gardner with Jamil Wilson, and Georgetown's guards cannot make up for that.

NOTHING. NOTHING CAN STOP THE WILDCATS. JK we've seen many times a weakness exploited. Again, too many 3's. Villanova was 9-22 against St. John's and again we see very little bench production. A frontcourt like Marquette's can play serious defense, forcing Villanova to play the guards. That's how Marquette can steal a big win on the road.

Of course another Seton Hall game is on CBS Sports.

Seton Hall is coming off a heart-breaking loss to Creighton, one in which Fuquan Edwin was a fumbled steal away from the game winning basket. Seton Hall is just 2-5 at home in conference play, meaning they are a much different team at the Prudential Center. This will come down to rebounds as well. Providence is tied with Villanova for first in the conference in RPG, however SHU is dead last. If the Friars control the offensive glass, Seton Hall cannot possibly sweep the season series from the Friars.

St. John's runs on defense. They do not rank in the top 100 in an offensive category, however are 2nd in the nation in blocks and top 100 in rebounds and points allowed. Defense created offense, so making blocks turn into transition points is how to stop the Musketeers; Georgetown did it last week as well, en route to a 22-point win.

I bet you're all thinking "Wow this one will get ugly" however DEPAUL WON THE FIRST MEETING I KNOW I CAN'T BELIEVE IT EITHER. St. John's ran into DePaul during their 0-5 start and thus they got an easy win. Fast forward 6 weeks and you realize DePaul is minus Cleveland Melvin and St. John's is now a bubble team. Yes, America, this will get ugly.

Against Xavier, Jabril Trawick reentered the starting lineup and provided 34 minutes. The Hoyas team was without him starting for over 4 weeks and struggled immensely. With him and Markel Starks bringing up the ball, their guard play no doubt thwarts the Golden Eagles' however it remains to be seen if their front court can hold up. Mikael Hopkins and Aaron Bowen need big games.

WOW Fox Sports must be excited for this matchup. After the close loss to Creighton, I'm high on SHU like I always am, and especially on the road this should be easy. Let Fuquan be Fuquan.

Butler was able to stay close to Providence until the very end because of hot 3-point shooting. This ties to Fuquan, yet again. When he is cold, the entire team suffers and there is no hope. When he is hot, however, he can carry the entire team like he did the last time against Providence. It lies in his hands from her on out.

As the announcer said (I wish I knew who said it to give credit) screens, screens, screens. Villanova is quick to pick up on that, but with enough basic offensive picks Butler can get the open shot, which has shown to convert. Villanova needed OT against these guys for their first Big East win, so we KNOW they won't go away easy.

Who's even going to watch this? Besides me of course. If they stop Fuquan Edwin they can really attack this weak team, but that's asking a lot for DePaul.

Even Jay Wright laughs at how bad DePaul is. 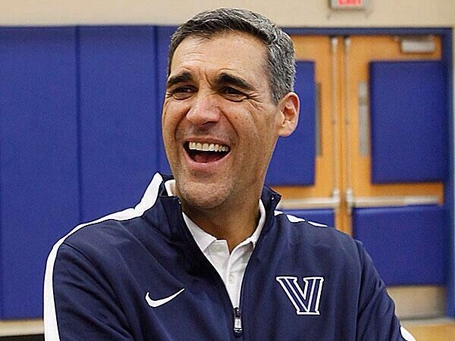