Big East Tournament 2014: What if the season ended today?

A crowded middle pack will be fighting for seeding priority over the final week of the season.

Share All sharing options for: Big East Tournament 2014: What if the season ended today?

The 2014 Big East basketball Tournament will be played from Wednesday March 12th to Saturday March 15th at the World's Most Famous Arena - Madison Square Garden. With under two weeks until tip-off, we're going to take a look at what the bracket looks like today, as well as what could happen between now and then.

If the season ended today, here is how the bracket would look. 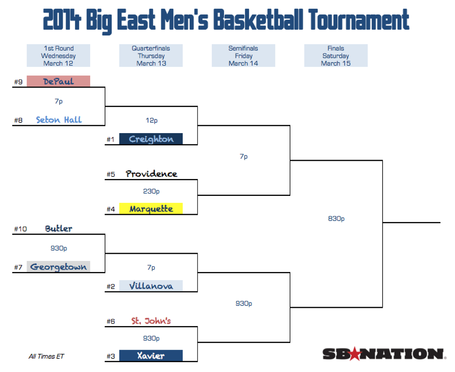 The one certainty in all of this is that the Villanova Wildcats and Creighton Bluejays have locked up the top two seeds meaning they'll have extra rest and open against a team who played on Wednesday night. By virtue of the games that shall not be named, Creighton currently owns the top seed. It will take a Creighton loss to put Villanova back in control of its own destiny.

Elsewhere, things are in a higher state of flux. Butler and DePaul will play this Saturday, but the Blue Demons have already beaten the Bulldogs once this year so Butler will need some help to get out of the basement. Seton Hall seems a pretty good bet to stay at the 8-seed with a 2.5 game lead on current 9-seed DePaul.

Things are much more interesting as we climb the ladder. Georgetown currently sits in 7th place, but is just two and a half games out of third place where Xavier and Marquette are currently tied. We can't seem to find a full breakdown of the tie-breakers in the new Big East, so we're going with Chris Mack over Buzz Williams in a boxing match (who doesn't love an upset?).

Here's the breakdown of remaining games for seeds 3-7.

Predicition: The team with perhaps the most difficult schedule down the stretch pulls an 0-fer as the Big East schedule finally eats them up.

Prediction: Buzz Williams can't get it done on the road, but rebounds just in time at home to rise to the 3-seed.

Prediction: Providence should be able to handle the Pirates on the road and squeaks out a tough win behind Bryce Cotton at home against the Golden Eagles. Creighton destroys them as payback for their earlier loss.

Prediction: St. John's throttles DePaul, but can't get it done on the road at Marquette and stays at the 6-seed.

Prediction: The Hoyas go 0-2, which could risk them falling to the eighth seed since they lost both games this season to Seton Hall.

So, if the above happens, you could see Marquette and Xavier swap places, which has a direct impact on Villanova. The other interesting seeding to watch involves Georgetown and Seton Hall. Right now, the 'Cats would take on the Hoyas just days after playing them in Philadelphia in a third rivalry matchup of the season, while a strong finish by Seton Hall could see them leapfrog the Hoyas, although it appears unlikely given their schedule.

What do you want to see happen?