Share All sharing options for: Big East and Big Ten Conferences announce The Gavitt Tipoff Games to launch in 2015-16

The old Big East never had a basketball 'challenge' series that reached the hearts and minds like the Big Ten/ACC Challenge. The Big Ten, meanwhile, has been a longtime participant in that epic made-for-television rivalry with the ACC. Both conferences, however, have been searching for an opportunity to strengthen schedules and boost the profiles of their members in basketball.

This morning, the Big East and Big Ten conferences announced a basketball challenge series that will be played in the first full week of the 2015-16 regular season -- forming a grand "season tip-off" type of event. The partnership will consist of eight games and will be run annually through the 2022 season. The two leagues have decided to name the event after Big East founder Dave Gavitt, calling it the Gavitt Tipoff Games. 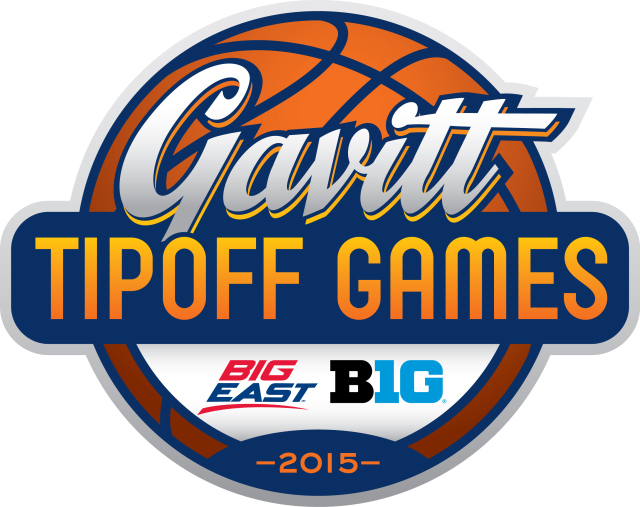 Both leagues are also connected through Fox Sports, whose network, FS1, owns the media rights for the Big East and who partner with the Big Ten on their conference's cable network. FS1 will carry the four Big East home games while the Big Ten Network will televise the other games.

Each Big East team will play in the tip-off a minimum of six times during the eight-year deal while Big Ten schools will participate at least four times each. The individual match-ups will be announced next Spring, and will be based on competitive parity, rather than geography or random pairings.

"These match-ups won't always be geographic; we're going to do them based on competitive parity," Big East commissioner Val Ackerman told ESPN. "We'll look at who are expected to be the strongest teams in each league and pair them against each other and sort of tier it, so we get the best match-ups."

So, while Georgetown and Maryland or Villanova and Penn State may be compelling for some locals, those games will not be scheduled under this agreement unless they make sense competitively on the hardwood. The challenge offers the Big East coaches a chance to schedule tougher games and improve their strength of schedule before the league season starts -- a move that could work to boost RPI and the league's tournament profile.

Poll: Who do you want Villanova to play in The Gavitt Games?

The two leagues are promoting the event as a high-profile means of kicking off the basketball season, to try and draw attention at a time of year where football remains in full-swing. It is also a means for the Big Ten to continue to expand it's eastward reach by pairing up with a conference that has a strong presence in those markets.

NEW YORK – The BIG EAST and Big Ten Conferences have announced the establishment of the Gavitt Tipoff Games, an annual early-season series of eight men’s basketball games played between the two conferences and named in honor of Dave Gavitt, founder of the BIG EAST and basketball visionary.

The Gavitt Tipoff Games will be played on four consecutive days in the first full week of the college basketball season. The series begins at the start of the 2015-16 season and will span eight years, with games played at home sites.

The unique series between the two conferences is named to honor the late Gavitt, who had a profound and lasting influence on the sport of basketball on the collegiate, professional and Olympic levels. He was inducted into the Naismith Memorial Basketball Hall of Fame in 2006.

"We are excited to honor Dave Gavitt and his contributions to the sport of basketball through the establishment of the Gavitt Tipoff Games," said Big Ten Commissioner James E. Delany. "Dave was a friend and a mentor to me and often mentioned that college basketball should do a better job of tipping off the season, similar to opening day in baseball. I think he would approve of our effort to start a new tipoff tradition, grow the game and serve the best interests of the student-athletes and coaches in these two great conferences."

"We look forward to partnering with the Big Ten to stage a new series of basketball games among our schools and to pay homage to Dave Gavitt, the BIG EAST's founder, who was an inspiration to many of us and one of the most impactful contributors in the sport of basketball," said BIG EAST Commissioner Val Ackerman. "We have natural connections with the Big Ten through our shared geographic regions, and these competitions promise some exciting new rivalries for our players, coaches and alumni. With March Madness, college basketball always ends with a flourish, and the Gavitt Tipoff Games will allow us to open the season with a bang as well."

"On behalf of the entire Gavitt family, we are humbled and grateful for this incredible honor in Dave’s memory from the Big Ten and Big East Conferences," said Dan Gavitt, NCAA Vice President of Men’s Basketball Championships and son of Dave Gavitt. "My father would love the spirit of creativity and friendship that these games represent to tip off the college basketball season. He would be most excited about the competitive experience that the games offer to the players and coaches of two great conferences."

The Gavitt Tipoff Games will feature four home contests each for BIG EAST and Big Ten schools on an annual basis from 2015 through 2022. Two games will be played on Tuesday, Wednesday, Thursday and Friday in the first full week of each season. Each BIG EAST team will participate a minimum of six times over the eight years, while Big Ten programs will participate a minimum of four times.

Television coverage of the Gavitt Tipoff Games will be controlled by the conference of the home team. BIG EAST home games will be telecast by FOX Sports 1, while Big Ten home matchups will appear on ESPN or BTN.

Teams from both conferences already meet in some traditional rivalry games, and those matchups will continue during the 2014-15 season. The full schedule of eight games will be announced in late spring of each year.

Piecing together the 2015-16 Villanova Basketball Schedule