With the conclusion of Saturday’s games the BIG EAST Tournament bracket is set with action beginning on Wednesday night at Madison Square Garden.

7-seed Xavier will play the 10-seed DePaul in the night cap.

Villanova, the top-seed, starts their quest for the conference tournament trophy at noon on Thursday as the Quarterfinal begin where they will play the winner of the Georgetown-St. John’s game. 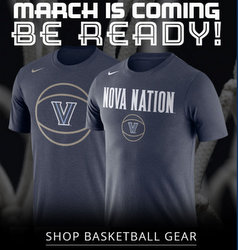 In the second game of the afternoon session 4th seed Marquette will play Seton Hall, the 5th seed.

The evening session will tipoff at 7p ET when Butler, the second seed, plays the winner of the 7/10 game between Xavier and DePaul. The 3-seed Providence will then take on Creighton, the 6th seed, in the day’s finale.

Friday’s pair of semifinals are set to start at 630p ET with the Conference Championship on Saturday, March 11th.

All games will be broadcast on FS1, except for the Championship, which will be aired on the big FOX channel.