Five. That's how many Preseason Tournaments the Big East will partake in this week. Four. The number of tournaments within the US. Three. The Wildcats hopefully come back to the US with that many more wins under their belt. Two. DePaul will receive two losses in their respective tournament. One. One tournament we will all be looking at is the Battle 4 Atlantis. Arguably, it is Villanova's first real test. Zero. The amount of money I have to travel to any of these places.

AXS TV (I've never heard of it either) 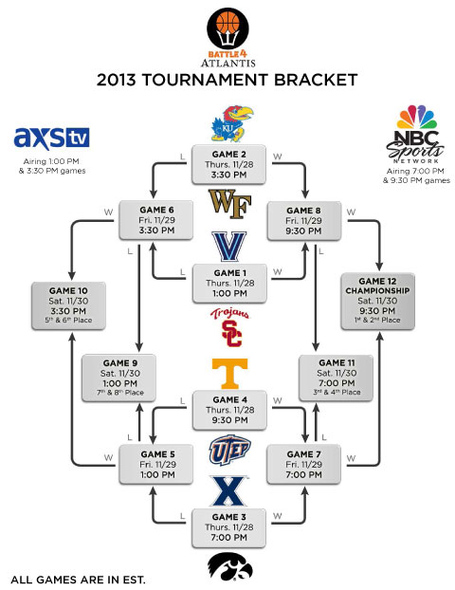 While it definitely is a distinct looking bracket, the only thing Wildcat fans and players alike notice is that a win most likely sets up a meeting with the Kansas Jayhawks. The Trojans themselves are no walk in the park, however. They're a big rebounding team led by junior Guard Byron Wesley and senior Center Omar Oraby, each averaging more than 7.8 rebounds a game. As I have mentioned week in and week out, however, opponent three point shooting is a big factor when it comes to winning and losing. USC struggles greatly from behind the arc, shooting 31.7%. Villanova should win this one and get at least one win in the Bahamas. Their ride probably stops there, however, because I don't see Villanova outlasting Kansas, even though they shoot a mediocre 37.5% from 3. Following this complex bracket-map, Villanova would play in Game 11 with a win followed by a loss. My bet is they play the Tennessee Volunteers, and they win that game.

Providence is still in St. Thomas as part of the Paradise Jam. They face the Maryland Terrapins tonight at 11:00pm in the Championship Game. It will most likely air on CBS Sports Network.

One of the few teams not competing in a preseason contest, the Friars will return from St. Thomas where they entered the Paradise Jam, defeating the Vanderbilt Commodores (a team I truly over estimated; see last week's preview on how I predicted them to be 2-0 vs. the Big East) and the La Salle Explorers. They will be well rested facing a poor Stags team who shoots a below average 38.7% from the field. Also disappointingly, sophomore forward Marcus Gilbert is the only Fairfield shooter averaging in the double digits, compared to the Friars' four. A well rested Friar squad should take this one easily.

The Bulldogs board a flight to Orlando as they enter into the Old Spice Classic. Here's a look at this tournament's bracket: 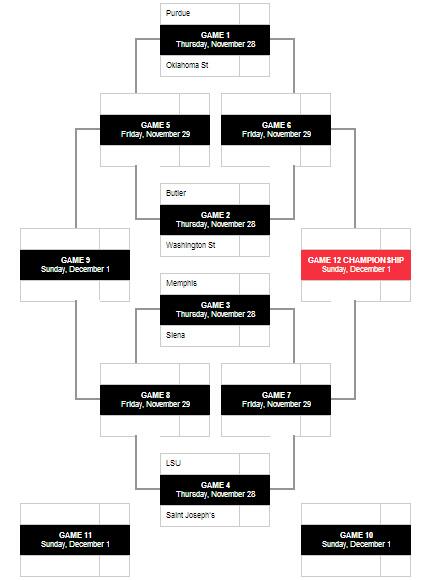 I cannot tell for the life of me which game means a team either won or lost, however I am much more confident in which teams the Bulldogs will face in their time in the ESPN Wide World of Sports Complex. They first face the Washing State Cougars a team whose start to the year has been dreadful. A team who shoots 27.2% from behind the arc and sports less than 12 assists per game only has their Junior Guard DaVonte Lacy to brag about, averaging 21 PPG. He won't be enough however, as Butler surpassed even my expectation this past week. A win would guarantee a game against Oklahoma State. NOT A CHANCE Marcus Smart gets contained so a loss there would, I assume, mean the St. Joseph's Hawks get a chance to pester yet another Big East foe, after the Hawks overcome the LSU Tigers but fall to the Memphis Tigers (ain't that confusing?). The way the Joe's almost overcame the Creighton BlueJays leads me to believe they will not have an issue coming away with 2 wins in this tournament- Butler loses that one.

Once again, espnevents.com puts up a poorly drawn out bracket, successfully confusing the heck out of me. Nevertheless, here's how The Wooden Legacy bracket maps out: 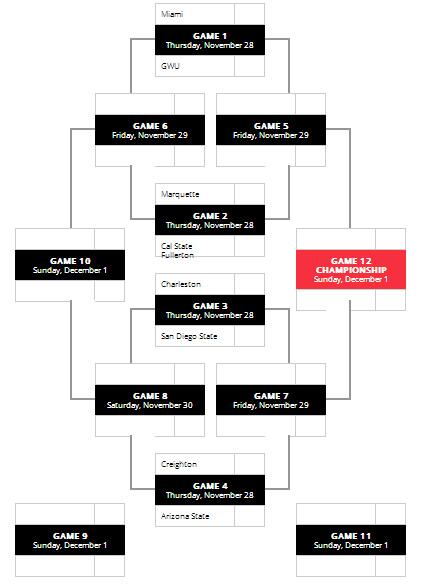 Think of it this way- you can bore yourself with the Thursday Night NFL Matchup of the Pittsburgh Steelers vs. the Baltimore Ravens and segue right into an exciting Creighton matchup. Both of these teams as of Monday are undefeated, however the Sun Devils are unfortunate enough to face Marquette and Creighton consecutively. Arizona State will truly be a tough test for both schools, facing a team led by sophomore guard Jahii Carson who puts up 23 PPG and Senior Center Jordan Backynski, pulling down 12 RPG. If you've read my previous Weekly Previews, you know how much trust I have in Creighton; they'll be victorious in this game. In fact, it wouldn't surprise me if they clean this place up and win outright.

Xavier looks to continue their unbeaten streak to start the season before joining Villanova in the Battle 4 Atlantis. I've never heard of this school. They are in Abilene, TX, which is more than 2 hours from any of the major cities in Texas. They have a Junior Guard named LaDarrien Williams, who averages 11.6 PPG, but the team as a whole lacks any sort of firepower with their 35.3% FG% and 32.4% 3-point efficiency. Not much to say here- Xavier will travel to the Bahamas 5-0.

(Scroll up to the Villanova preview to see the B4A bracket). The Musketeers have an arguably easier road in the bracket, holding off a battle with Kansas until the final round. However, their first round clash with the Iowa Hawkeyes is no walk in the park. When they played that Albilene team, they won by 62 points. They actually rank in the top 10 in the country in PPG (92.6) and RPG (48.4). Junior Forward Aaron White plays a big role in both of those ranks, averaging 13.6 PPG and 7.6 RPG. While not ranked in the AP Poll, Iowa is number 25 in USA Today. Xavier should take their first loss of the season here. A loss there would seemingly put them versus the University of Texas of El Paso Miners. With the Miners having a 3-2 record to show in the weak Conference USA, Xavier should get back on the winning track. On the top half of the bracket, the Wake Forest Demon Deacons. Xavier will board the plane back to Cincinnati with 2 wins, 1 loss, and a smile.

DePaul was invited to the College Basketball Experience Hall of Fame Classic. Here is a look at the schedule:

Personally, I question what kind of college basketball "experience" this will be if you invite DePaul...

Let's just say, I'd be SHOCKED if DePaul wins this matchup. Wichita has two key players with some awesome, unique names. Cleanthony Early (14.8 PPG, 7.4 RPG) and Fred VanVleet (14.6 PPG, 5.8 APG) both will be challenges for a DePaul team we (or just me?) all look down upon. This loss would have them in the Consolation Game against the loser of the Brigham Young Cougars and the Texas Longhorns. The days of Kevin Durant and LaMarcus Aldridge are long over- BYU will go on to face Wichita State in the Championship Game. DePaul should take the game against Texas, however. Texas' close loss to the Mercer Bears strings a chord of doubt in my heart for this team.

The Scheduling Gods were not exactly kind to DePaul, as they do not get the ample rest time most other schools got. This could be due to the fact that DePaul is staying in the US for their respective preseason tournament. I am unsure as to how this Oregon State team has flown under the radar for me. They have two VERY DOMINANT players on their roster. One of which is Senior Guard Roberto Nelson, who is posting an unheard of 30.3 PPG and 5.7 APG. The other beast on the west is Devon Collier, a Senior Forward who sports 20.0 PPG and 11.0 RPG. Oregon State seems to come up big against good teams (they defeated Maryland by 7 IN College Park) so look for DePaul to have just a subpar week and look for me to laugh.

Marquette has been pretty disappointing lately. They had to squeeze by the New Hampshire Wildcats AT HOME, following their atrocious shooting performance vs. the Ohio State Buckeyes. AT HOME. Maybe a nice little road trip is what they need. As I noted in the Creighton preview, Arizona State is no laughing matter. Look for Marquette to lose this one, and leave the Rankings officially.

(Scroll up to the Creighton preview to see the Wooden Legacy bracket). Unfortunately for the Eagles, this game is essentially a home game for Cal State, with the game being played in the arena they play all their home games. Also, this will only be the Titans' second home game this year, so the energy in the stadium will be enormous. Even with all this to Cal State's advantage, I still think a trip away from Wisconsin will do the Golden Eagles a lot of good, and they'll take this game. They go on to play the winner of the Miami Hurricanes and George Washington Colonials. This matchup is very tricky to decide on- GWU ranks in the top 25 in the country in PPG, RPG, APG and FG%, and Miami has struggled this year. I'm actually taking the Colonials in this one, with Marquette overtaking their revolution. This would equate to a Big East Final in Anaheim between Creighton and Marquette. As I said before, Creighton overall.

Longwood has few bright spots in their roster. Senior Guard Tristan Carey, a transfer from La Salle, is averaging 18.8 PPG, but no one else on the team gets into the double digits. St. John's will win this game before taking a very quick trip to Brooklyn for the Barclays Center Classic, pending the traffic. 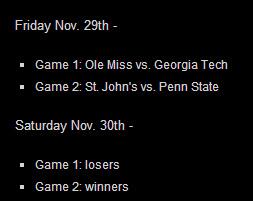 I love how it neglects to say "Consolation" or "Championship" and blatantly says "winners and losers." I respect the to-the-point attitude of the Barclays.

Don't let the prominent name and 4-1 record fool you: Penn State has not been great this year. Senior Guard Tim Frazier has added a spark to the backcourt with 20.5 PPG and 7.3 APG, however the team still only gets 13 APG as a whole. The fast paced Red Storm should be a shock to the Lion system, and should be one of the winners. The Ole Miss Rebels should also be "winners" over the Georgia Tech Yellow Jackets and St. John's should put its pieces together and win outright with all the talent they hold. All the Big East teams better watch out for them once they figure out their gameplan.

How poorly the Scheduling Gods treated DePaul was how kindly they treated Seton Hall. After playing two games in Brooklyn, which is about 30 minutes away, they received 8 days to rest up for the easiest match against Fairleigh Dickinson. The Arizona Wildcats had 6 players score double digits in their meeting with the Knights. Senior Guard Fuquan Edwin and Sophomore Guard Sterling Gibbs have been a bolstering backcourt that will no doubt be too much for the lowly Knights. The Pirates get an easy week, for sure.

LOL Georgetown Hoyas are at the bottom of the standings

One look at the Lipscomb roster and you notice how young they are; over half of their team is either a freshman or sophomore. That won't help themselves just yet, because the Hoyas will have had some rest after their surprising win vs. the 10th ranked Virginia Commonwealth Rams in the Puerto Rico Tip-Off, a game in which 61 fouls were called (I guess the foul issue ISN'T fixed just yet). But they also lost to the Northeastern Huskies. Definitely a mixed bag in the US territory. One glaring issue with the Bisons is their 66.2% FT shooting and the 33.1% 3-point percentage. No matter, a refreshed G'Town team will definitely look at the negatives from the previous week and build on it, taking out their anger on the Bisons; a win is in the Hoyas future.

WOW. That was a lot of stuff. Take it all in, enjoy it, and don't eat TOO much on Thursday. Ah, what the hell. Go crazy!