Creighton will travel the most, Georgetown the least.

Share All sharing options for: The Big East Travel 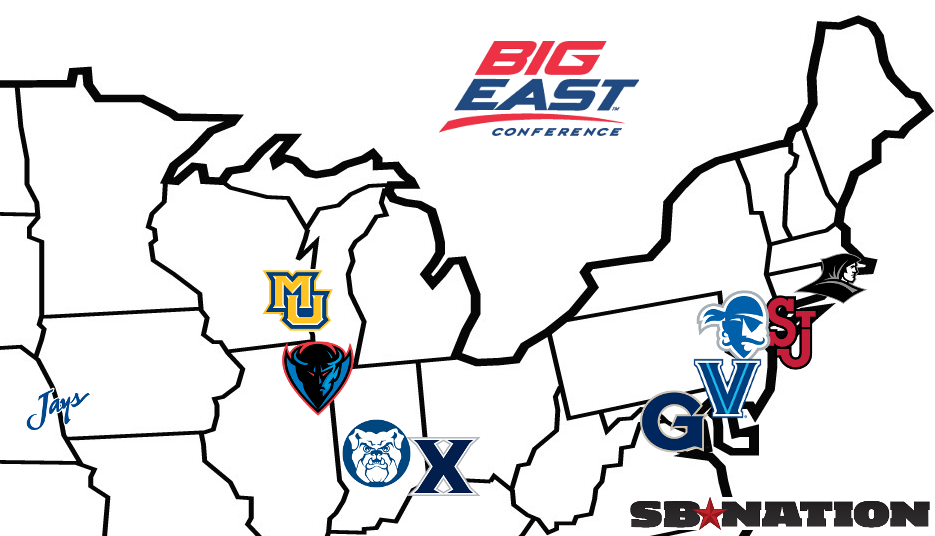 The addition of Xavier, Butler, and Creighton to the BIG EAST came as no surprise to anyone who follows VU Hoops.

Those schools increase the conference's reach into the midwest solidifying the cities of Cincinnati and Indianapolis but also move the conference west of the Mississippi and into Nebraska.

With Conference Play about to kickoff, each Big East team will play the others twice- once at home and once on the road in a true round-robin schedule. It's time to look at the travel this will put on the teams.

In a re-post, putting the schools on the map, one quickly notices a Northeast Corridor of Georgetown, Villanova, Seton Hall, St. John's, and Providence- as the schools are based near the major metropolises of Washington, Philadelphia, New York, and Providence where the longest distance between schools is 372 miles.

The other five schools quickly create a MidWest grouping where Creighton's Omaha location puts the nearest opponent 416 miles away. The Blue Jays will indeed travel the most as they make the move from the Missouri Valley Conference to the new BIG EAST as they will log over 7,500 [one-way] miles visiting the other nine schools.

Georgetown will have the shortest distance traveled with just over 4,000 miles. Villanova and Xavier will travel slightly more than the Hoyas.

Do you plan on making a trip to watch Villanova play at one of the new schools?