Injuries are still causing a lot of concerning mid-season shifts for the Wildcats' two-deep.

The Villanova Wildcats depth chart is now out for Saturday's trip up to the great-white-north of Orono, Maine, where they will face the Black Bears, and there are a few changes this week on both offense and defence, including one big surprise and one seeming trend (hint: Austin Calitro).

On offense, you can go ahead and scratch number-two tight end Morgan Craig off of your depth chart. Doug Turrell, a 6-5, 275-pound senior will be backing up Earnest Pettway this weekend. That's one of the most-interesting changes this week, but it isn't the most important one.

Starting center Ross Hall is nowhere to be found on the depth chart. It appears that he didn't survive the Penn game unscathed. In his place, Peter Sotiriou will slide over from back-up right guard to snap the ball.

With Calitro moving out of the defensive end slot, freshman defensive end Eric Drains is going to take over as the chief back-up to Noble Ajakaiye.

If you were wondering about Morgan Craig, you'll also find him on the defensive side of the chart -- the real shocker this week. Craig has been a big blocking tight end for the Wildcats, for the past three seasons, but like Brennan Erbeznik did as a senior, he has switched over to back-up Reggie Paris at defensive end, replacing Michael Williams. 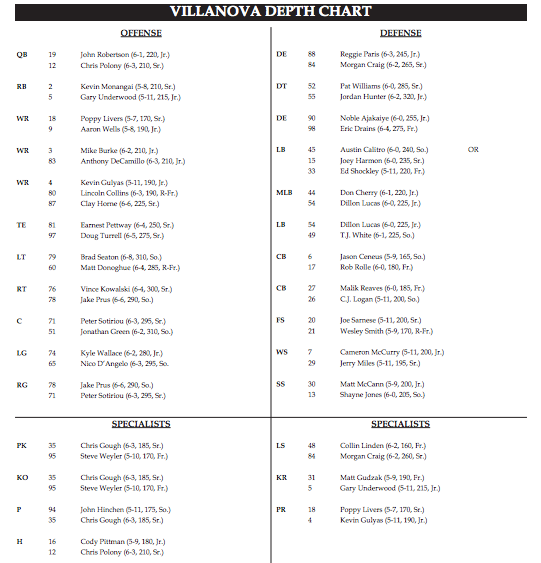