The Villanova Wildcats have released their depth chart for Saturday's trip down Lancaster Avenue to play the Penn Quakers, and there only minor changes on offense, but some significant shuffling on defense. With DE Tanoh Kpassagnon and LB Corey Majors likely out for the season, that is no real surprise, of course, and neither appears on the depth chart this week.

On offense, the only notable switch is the expected move of Gary Underwood to the number-two running back slot. He takes over for Austin Medley, who will be sidelined at least four weeks with a pair of ankle sprains.

The defense sees Austin Calitro switch positions for the second straight week. Calitro moved from linebacker to defensive end before the season started, and back to linebacker last week. He'll return to the defensive line this weekend as the back-up to Noble Ajakaiye, who will step in to start after Kpassagnon suffered a serious knee injury last week.

Joey Harmon was also listed on Coach Andy Talley's injury report as "doubtful," but appears on the depth chart as the presumed starter - with last week's number-two MLB, Ed Shockley moving outside to back him up. Dillon Lucas will get the start again this week at outside linebacker, and will also back-up Don Cherry at the middle linebacker spot.

Last week, Lorenzo Fertitta appeared as part of a three-deep at cornerback, but was dropped from the depth chart heading into the Penn game. It doesn't seem like he is injured, but may have just been a victim of some SID housekeeping.

Freshman tailback Matt Gudzak will also play a bigger role this week, likely taking a few hand-offs on offense, and displacing Joe Sarnese as kick return specialist this week. His previous action included a 60+ yard sprinting touchdown against Fordham near the end of the 4th Quarter. 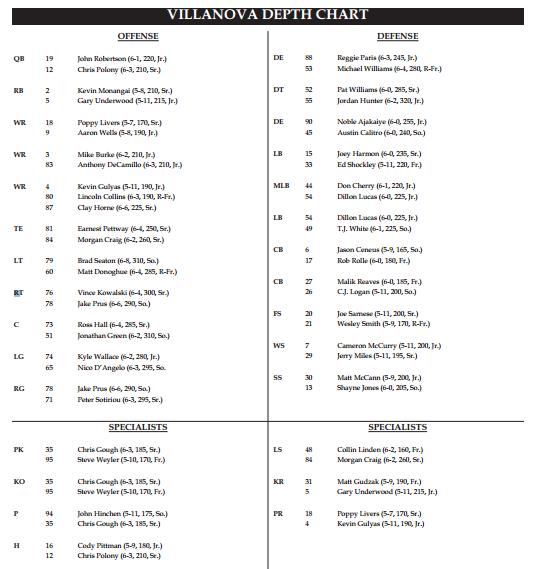