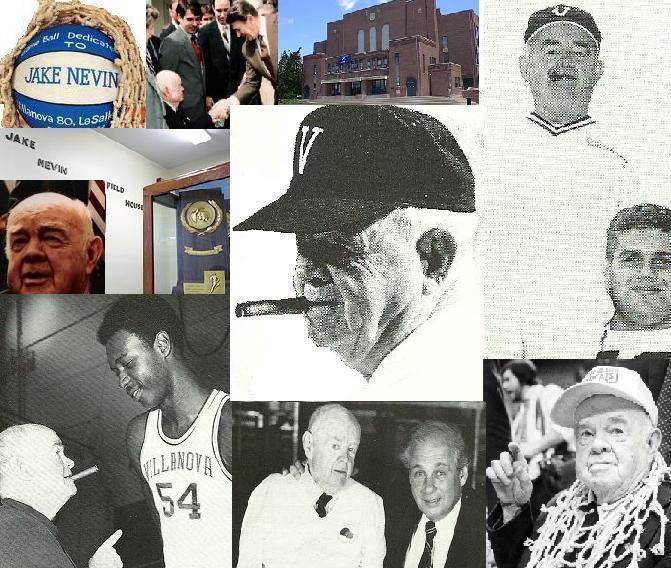 John "Jake" Nevin (1929- 1985) served as Trainer for Villanova University athletic teams for over 50 years until his death in 1985. A great trainer, Nevin is perhaps better remembered as a beloved character and a practical joker cast in the shape of a leprechaun. One former player, Jack Devine, told one of the all-time great Nevin yarns at the dinner celebrating Jake’s posthumous induction into the Big Five Hall of Fame in 1985. Recalled Devine, "During a train trip to an away game, Nevin kept telling [Coach] Severance he looked flushed and not at all well. Nevin then stuffed several bricks into the Severance’s suitcase. ‘Maybe you’re right, huffed "The Squire," as he struggled onto the platform at the end of the trip. "I am so weak I can barely lift my suitcase." During Villanova’s 1985 NCAA basketball playoffs, Nevin, then using a wheelchair and suffering from Lou Gehrig’s disease, inspired the 1985 Villanova Wildcats basketball team during their run to the NCAA Championship. Craig Miller writes in The Year of the Cat, "With ten seconds remaining in the 1985 NCAA Championship game and ‘Nova holding a 65-62 lead, sophomore Harold Jenson walked to the side of the Villanova bench and kissed the balding head of Jake Nevin saying, ‘This one’s for you.’ Dwayne McClain would later say, "That’s when I knew we had it." On Nov. 22, 1985, Villanova renamed its field house the John Jake Nevin Field House and retired basketball jersey number 1 in his honor. Two weeks later, Jake died at the age of 75.

Sports Illustrated wrote this about Jake six months before he left us:

"Jake Nevin, Villanova's sly old spitballer of a trainer has survived a misspent youth and a misspent middle age, and looks forward to misspending whatever comes next. He has been an institution on campus for 56 years. Fifty-six years of snipping neckties in half, leaving cigar butts in the pockets of coaches' sports jackets and taping dozy football players to rubdown tables. Fifty-six years of innocently asking waitresses, "Hon, do you always wear one earring?"

Nevin is short and stubby, just like the El Producto that's perpetually cocked in his mouth. Though his jokes are older than the crack in the Liberty Bell, there's something about this roly-poly lollipop you can't help but like. The Wildcat basketball team is so crazy about him that it dedicated the '84-85 season to him, and now the university is talking about naming the new field house in his honor. He gets postcards from Altoona to Zanzibar addressed simply: Jake, 19010.

You used to see Nevin at every Villanova game perched on the team's first-aid kit. He was courtside as usual at the NCAA title game in Lexington, Ky., where his Wildcats upset Georgetown 66-64. In fact, Nevin was such a constant presence on TV, you might have thought he was part of ' Nova's backcourt. But Lou Gehrig's disease has made Nevin wheelchair-bound. He keeps his cigar stuck in a hole in the armrest.

Although he is still listed as head trainer, Nevin no longer wraps ankles with his patented taping technique, which called for a generous buffer of cigar ash between skin and tape. He's now healing with his heart instead of his hands. Of course, that was always his preferred therapy.

"No one at Villanova has ever touched more lives than Jake has," says Wildcat basketball coach Rollie Massimino. The feeling is mutual. The upstairs bedroom of Nevin's house is chock-full of nutty little plywood cutouts backing photos of illustrious Wildcat athletes: every track star who ever participated in the Olympics, every hoopster with 1,000 or more career points, anyone who broke or tied some school record. "Sometimes when I'm outside," he says, "I look up through the window and see their shadows on the wall."

Nevin has always held his players in high esteem. He knows they're more than a bunch of wobbly ankles that need to be taped. And they love him for it."